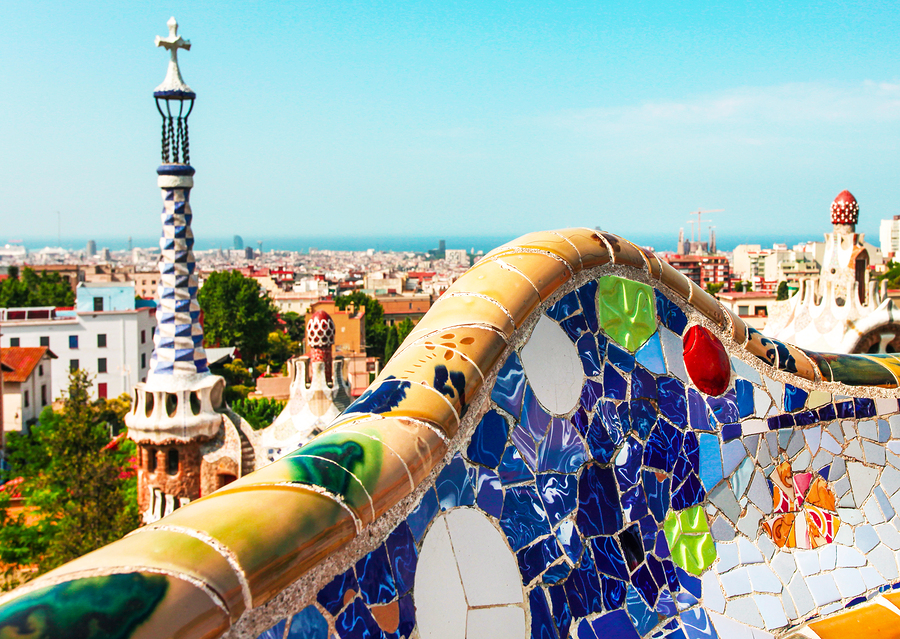 10 things to see in Barcelona

Once home to Salvidor Dali, Pablo Picasso and many other world-famous artists and writers, it’s easy to see why Barcelona is regarded by many as one of the most popular and important cities for cultural and artistic expression in Europe.

Originally named Barcino, Barcelona has evolved and expanded greatly over the last two thousand years and is filled with treasures from across the centuries, so if you’re planning a visit, here are ten sights that shouldn’t be missed.

Accessed by funicular railway and cable car, which is an event in itself, Montjuïc Hill, especially the castle, is home to of some of the best views of Barcelona and a great way to watch the bustling city from a distance. On top of the stunning vistas, the area isn’t short of content including the Fundació Joan Miró Modern art gallery, the Catalan museum of archaeology and the botanical gardens all located nearby.

If you do decide to visit Montjuïc be sure to stay until nightfall and be dazzled by the light show at the Magic Fountain. Built in 1929 but completely reinvented for the 1992 Olympic Games, the fountain brings together music, light and water aerobics in unforgettable harmony.

Steeped in local history and culture, exploring Barcelona’s old gothic city could keep you busy for weeks. Popular with artists and antique sellers, exploring the markets, cafes and galleries is an intimate journey that will take you back through the ages.

If you get thirsty be sure to pop into the El Bosc de les Fades. Translated as “Fairy Wood” it does its name justice, with fake trees, decor and fairy sounds transporting you to a magical realm, you’ll have seen nothing like it before.

Born in Malaga, Pablo Picasso moved to Barcelona in 1895 at the age of 14 and five years later he held his first exhibition. Often associated with his later time in Paris, The Picasso Museum is one of the largest collections of his work in the world, displaying 4,249 pieces and is a fascinating glimpse into his formative years.

“The only street in the world which I wish would never end.” Is how the Spanish Poet Federico García Lorca once described La Rambla. Located in the central Barcelona, it isn’t actually just one street but many smaller interconnected ones. A real cultural heart of the city with theatres, museums and the renowned Gran Teatre del Liceu opera house, all within walking distance.

Also located in La Rambla is La Boqueria, Europe’s largest food market. Crammed full of local produce and dishes, it’s more than just a market and is a bona fide slice of Catalonian life that will captivate you with its sounds, sights and smells.

Funding by the local fishermen and completed after just 55 years in 1383, this church is a stunning example of the Catalan Gothic movement of the time.

Free entry before 1pm and 8 euros after, it is as stunning inside as it is on the out and needs to be seen to be truly appreciated.

The home of Barcelona Football Club is more than just a stadium to the 99 thousand people that attend every match and you should sample the electric atmosphere yourself at the one-time home to some of the greatest talents in world football including Johan Cruyff, Hristo Stoichkov and three times Ballon D’Or winner Lionel Messi.

First appearing at the1888 Universal Exhibition, Mordernista was an artistic movement that attempted to define and explore Catalan culture and present it within its literature, art and most famously architecture. You’ll find yourself surrounded by these building masterpieces including Casa Batlló and La Pedrera which truly define the city’s unique personality.

Seen by many as the greatest example of the Modernista movement by its greatest contributor Antoni Gaudí, Park Güell is expansive landscaped and wooded area, filled with walks and paths and beautiful Gaudí designed buildings and towers.  With four million visitors annually, it’s best to book ahead.

Do you have any favourite spots in Barcelona?