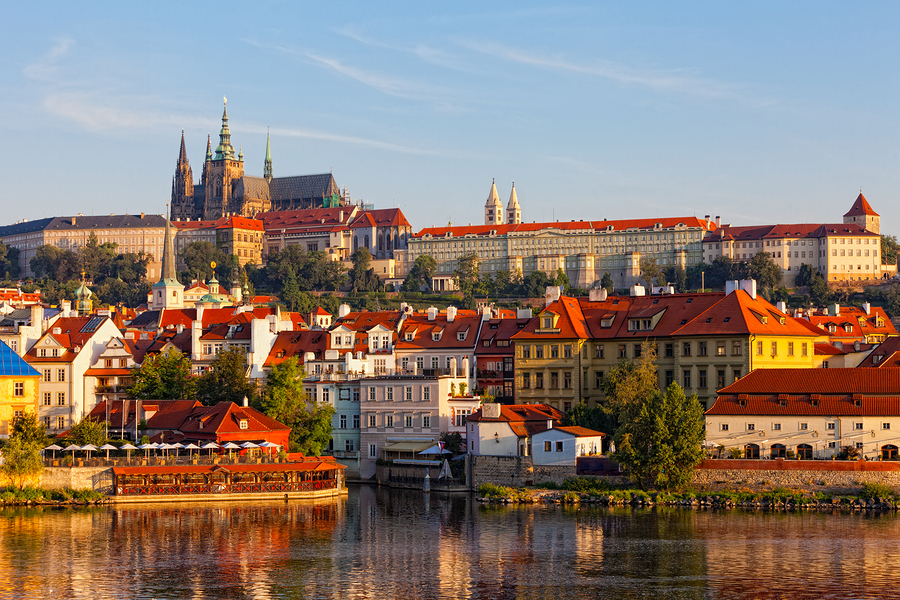 10 things to see in Prague

Since its foundation in 885 Prague has become a city steeped in a rich and vibrate history.

It’s everywhere you turn and can transport you back in time, but there is more to this city than the past as growing modern trends in art and music have transformed Prague into almost two worlds, the old and the new.

With so much to do and see it’s easy to understand why Prague has become such a popular destination in recent times and here are ten attractions that shouldn’t be missed.

Collaboration between world renowned architects Vlado Milunić and Frank Gehry, The Dancing House was completed in 1996. Nicknamed Fred and Ginger due to its appearance as a waltzing couple, the coming-together of static and dynamic shapes were in part to symbolize the political changes at the time as democracy replaced the communist regime.

If you’re not content looking from the outside, the Ginger & Fred restaurant is situated on the 7th floor and offers great views of the area. Find more details here.

Built under the orders of Charles IV after the destruction of Judith Bridge in 1342, The Charles Bridge is adorn with 30 stunning baroque statutes and the Old Bridge Tower offers fantastic views of the city.

During the day you will find the bridge filled with market stalls, musicians and other entertainers but it is at night with views of Prague castle lit in the distance that are truly unmissable.

Spanning centuries and ever changing, Prague Castle now contains a Royal Palace, three churches, fantastic gardens and much more. The castle has been the seat of power for many over the centuries including Roman Emperors and even Adolf Hitler who spent one night during the occupation of Czechoslovakia.

Now it is the home and offices of the current President of the Czech Republic.

The heart of the tourist experience for any visitor, the square is a fantastic celebration to the city’s rich history with buildings of many styles from various centuries including Gothic, Baroque and Renaissance.

Jam-packed with artists and vendors, there’s no shortage of cafes and restaurants so you can take in the many sights while you grab a bite to eat!

If you’re in the Old Town Square you’ll struggle to ignore the Astronomical Clock as it strikes on the hour with trumpets blaring and bells ringing to signal in the new hour.

Created in 1410 by a watchmaker and mathematician the clock can visualise many forms of time including, Old Bohemian, Star, lunar as well as good old present day time.

Bursting into the scene with his famous pink tank war memorial, David Cerny has become one of the nation’s most famous and controversial contemporary artists.

His captivating sculptures can be found dotted around the city centre including a car appearing to walk on human legs,  a bus stop transformed into a dinner table and high above the streets a model of Sigmund Freud hanging precociously from a ledge.

Located in the heart of the Jewish Quarter is the oldest active synagogue in Europe. In legend it is home to Prague’s Golem, a fabled creature created from clay to protect the people. These days it’s the treasured heart to the local community and well worth a visit.

Taking artist Alfons Mucha over twenty years to create, the Slav Epic is a cycle of twenty enormous canvas paintings which celebrate Czech mythology and history.

First unveiled to celebrate ten years of Czechoslovakian Independence in 1928, the works can now be found in the National Gallery’s Veletržní Palace.

Dubbed the city’s Lesser Quarter there is no shortage of sights located within. Some must-sees include current home of the senate Wallenstein Palace, the famous Infant Jesus of Prague statue and the stunning St. Nicholas Church, seen by many as finest example of the city’s Baraque period.

Found in Mala Strana’s Grand Priory Square, This ever-changing mural to John Lennon was created after his death in 1980 and became a place of political focus for the frustrated Czech youth at the time.

New messages are still found now and the wall has come to represent a special place for the ideals of peace and love for many people.

Have you visited Prague?