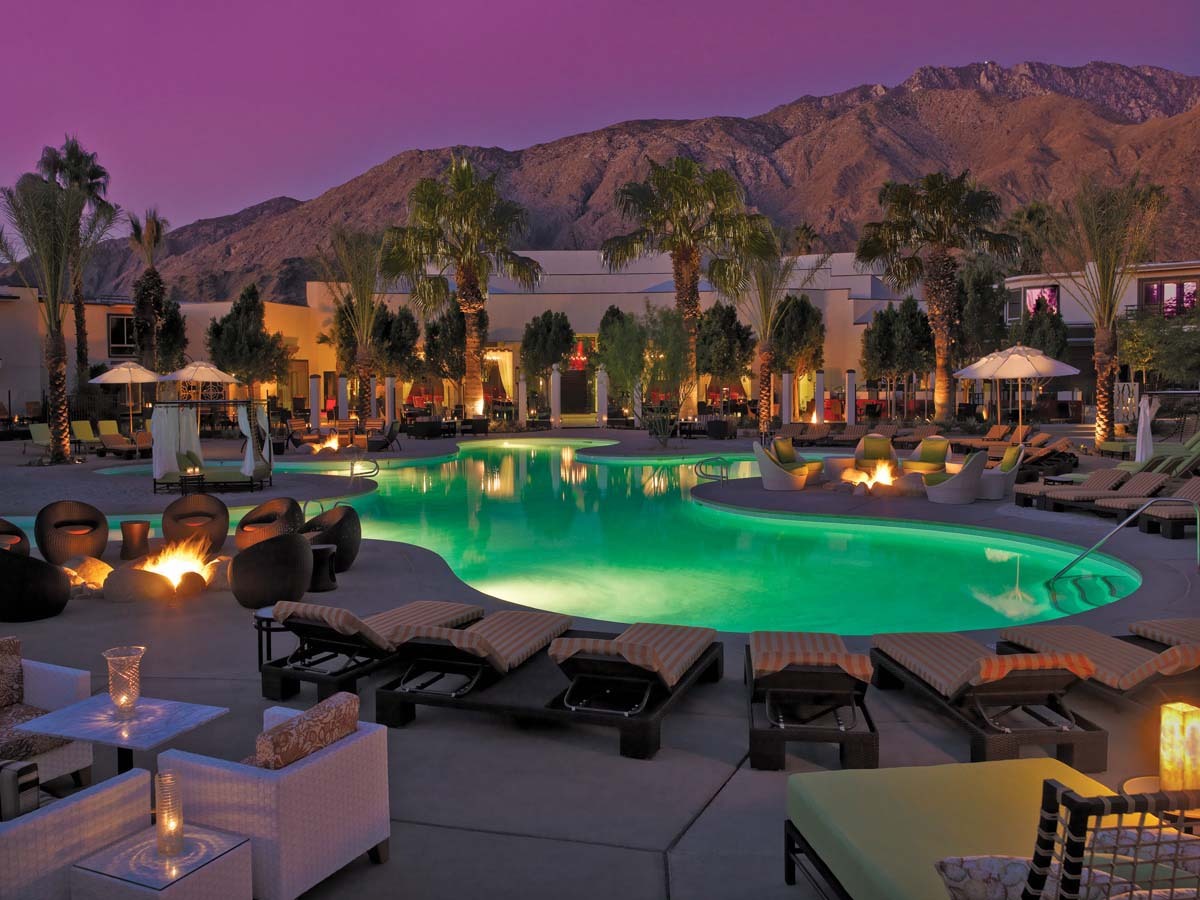 If you’ve ever taken an interest in the lives of the great and good of 1950s Hollywood stars, you’ll know Palm Springs was one of their favourite retreats.

Even from a distance, it’s very easy to see why the likes of Marilyn Monroe, Frank Sinatra and the rest of the Rat Pack (George Hamilton, Elizabeth Taylor, Jack Benny, Kirk Douglas and Cary Grant) enjoyed relaxing there, whether on long weekends between filming – Los Angeles is just over 100 miles away – or during breaks between shows in Las Vegas, under four hours away by car.

Get a little closer, and the appeal of this lush oasis in the middle of the desert – or Hollywood’s playground as it’s often referred to – is everywhere you look.

Archaeologists state the Cahuilla people were living in those parts as far back as the 16th century. Mexican explorers familiarised themselves with the area some 300 years later, while the first-known use of the name Palm Springs on a map dates back to 1853.

The city as we now know it, however, was officially founded in 1938, meaning Palm Springs is celebrating its 75th anniversary this year. And there’s never been a better time to visit.

There are plenty of flights into Palm Springs, although chances are you’ll be driving there from either LA to the north or San Diego to the south. It’s certainly the best way to experience the landscape, which, putting it mildly, is absolutely jaw-dropping.

If you’re driving north east from San Diego, make sure you take Highway 74 rather than sticking to the monotonous, concrete Interstate. It will take a little longer, but the snake-like pass makes for a much more fun drive.

More importantly, you’ll pass through the Santa Rosa mountains. Stop off at Vista Point and take in the sprawling cities on the valley floor below, and in the distance, the San Jacinto and San Gorgonio mountains.

From here you can also get a taste of just how green Palm Springs looks. For example, there are 38 golf courses, grass-banked streets, parks, and, as you might expect from the name, palm trees everywhere.

We stayed at the Riviera Palm Springs, which regularly welcomes what the Americans call bachelor and bachelorette parties through its doors, but don’t be put off by that. These are wealthy groups of friends wanting a serious tan ahead of their big day.

The hotel itself doesn’t so much nod to its glamorous legacy – Frank Sinatra used to rehearse in the gorgeous ballroom before Vegas residencies – but bask in it. The room I stayed in came complete with cow-print bedhead, overly ornate lamps and other fittings that even Liberace might’ve thought were pushing it a bit. Even the pool table in the lobby has a chandelier over it.

Spread over a huge area due to Palm Springs’ strict building-height regulations, there’s a campus feel to the Riviera, and the Tiki-themed circular pool out back is the star attraction. Get yourself a sun lounger, pull out the Jackie O face-obscuring sun glasses and lie back with a stiff drink, imagining you’re not a tourist, but a damaged Hollywood starlet hiding from the paparazzi while getting over your latest divorce.

The Joshua Tree National Park is on your doorstep and you’d be a fool to be so close and not pay it a visit. To get the best of the area, go on one of Desert Adventures’ jeep tours. Their guides are as knowledgeable and entertaining as the scenery is breathtaking.

Such is its location, if you visit Palm Springs, it’ll likely be in the middle of your tour, or at least not the only place you stay.

San Diego, just a few miles from the Mexican border, is a perfect place to start or end up.

The Hyatt Regency is a fantastic place to stay, right next to a harbour and close enough to SeaWorld that you can hear the dolphins splashing about from the balcony. Breakfast on their marina is a perfect start to the day, too.

Even if it wasn’t across the road, SeaWorld is a must-see attraction in San Diego, whether you’re interested in petting dolphins, feeding California Bat Rays, watching Shamu and his friends’ aquatic acrobatics or riding on the new magnetic Manta rollercoaster.

If you prefer your animals more land-based, head to San Diego Zoo. They have all the favourites – big cats, elephants, a host of apes and primates, huge bird and reptile houses, not to mention the most successful panda breeding scheme outside China.

The glamour of the 1950s also runs deep in San Diego. Take the San Diego Trolley Tour out to Coronado and stop off at the Hotel Del Coronado, or the ‘Seminole Ritz’ to anyone who loves Some Like It Hot.

The ‘Del’ has appeared in a host of other classics, while Wizard Of Oz author L Frank Baum did most of his writing there, looking out at the wild Pacific in front of him, and is said to have based the Emerald City on the building.

If San Diego doesn’t take your fancy, you could head west from Palm Springs and visit Los Angeles. There’s no shortage of things to do, whether you just want to stroll down Venice Beach, dodge the desperate wannabe actors outside Grauman’s Chinese Theatre, drive through Laurel Canyon, home to the best of 1970s singer songwriters, or, continuing the film theme, visit Universal Studios.

By night there’s also plenty to keep you occupied. If you stay around West Hollywood, as we did in the Andaz on Sunset Boulevard, you won’t have to venture too far. Drop in to The Chateau Marmont and you might see an A-lister meeting their agent. Even if you don’t, their cocktails are pretty special.

More rough, ready and rowdy are the nearby dive bars, such as Rock & Reilly’s, where you can get a massive measure and a mixer for about a fiver, and the Whisky A Go Go, where every rock band worth their salt has played over the years.

Of course, this is merely scratching the surface of a city home to some four million people spread over almost 500 square miles. Los Angeles is a busy place, huge too, but teamed with trips to calm and measured Palm Springs and laid-back San Diego, southern California can cater for whatever mood you’re in.

Travelbag has two nights in the Hyatt Regency Mission Bay, San Diego, two nights at the Riviera Palm Springs, two nights at the Andaz, West Hollywood, seven-day car hire and flights with US Airways, into San Diego and out of Los Angeles, from £1,089 per person based on travel between January 1 and March 31, 2013. To book call 0871 703 4698 or visit www.travelbag.co.uk For more information on visiting California go to www.visitcalifornia.co.uk or call 020 7257 6180