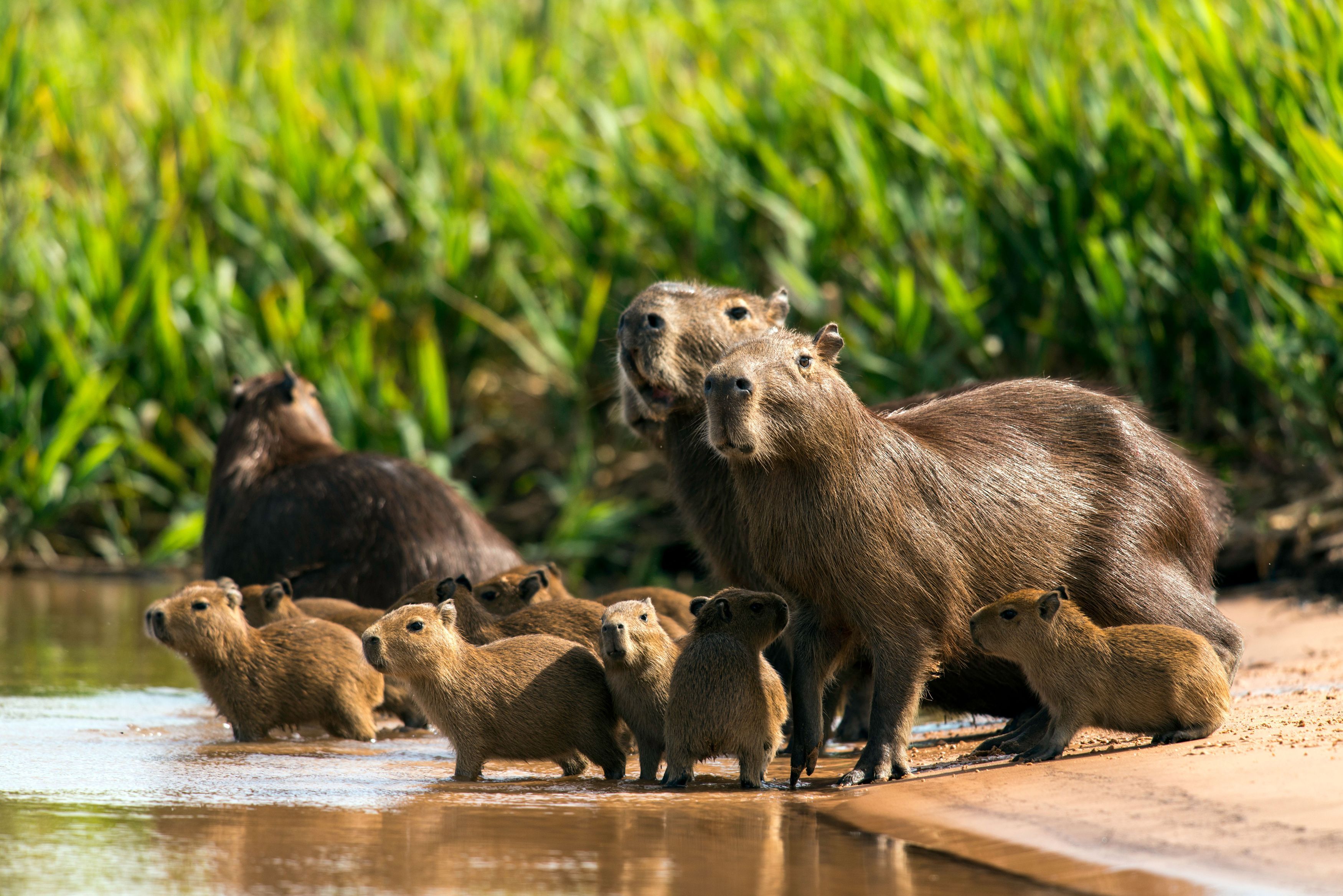 Lesser known than the Amazon but just as rich in wildlife, the Brazilian Pantanal is the best place to spot jaguars in the wild. Sarah Marshall goes in search of these elusive big cats

As the pink dust clouds settle, a weathered cowboy and his herd of cattle come into view, the warm, apricot early evening sun casting them in a spotlight.

Like us, they’re travelling along the Transpantaneira, the single bumpy dirt track that cuts through the Brazilian Pantanal and the state of Mato Grosso. It’s taken me 35 hours to get here, but on horseback, venturing off track at times, they won’t reach the cattle market for another two days.

Wild, harsh and largely impenetrable, South America’s Pantanal is the world’s biggest swamp – stretching across Brazil, but spilling into Bolivia and Paraguay – and the continent’s richest source of wildlife.

It’s a far cry from the bright stadium lights of Rio and Brasilia, where football fans will be heading this summer. But thanks to increased media interest, such as BBC Two’s recent documentary Wild Brazil, it’s steadily gaining worldwide exposure.

Once used mainly by farmers and wealthy sports fishermen, who come to cast off in the area’s many waterways, the 145km Transpantaneira now attracts increasing tourist traffic, the majority searching for the Pantanal’s most awe-inspiring resident: the jaguar.

This is undoubtedly the best place to see these big cats in the wild, and hoping to spend some time in their company I’m heading to Porto Jofre, in the heart of the Pantanal and the very centre of South America.

As our journey takes us deeper into the thorny scrub, we pass a large water hole speckled with Jabiru storks touching down and taking off in quick succession.

Hundreds upon hundreds of gnarly-skinned caimans lie motionless in the shallow water, mouths open as if catching one of the many encircling flies. When the swamps dry out completely in September and October, they will remain submerged in the mud for three to four months, only their beady eyes protruding from the ground.

A lack of water also drives jaguars to the riverbanks, giving wildlife enthusiasts the best opportunities for sightings during this dry season.

Sat on the banks of the Cuiaba river, at the end of the Transpantaneira, Porto Jofre is one of the best bases for jaguar tours. Accompanied by my guide Juan Silva da Cruz, one of the region’s most knowledgeable and passionate guides, I will spend the next few days exploring the river and its tributaries by boat, in search of wildlife.

We set off on our first outing at 5.30am, accompanied by a chattering soundtrack of birdsong. In the treetops, a golden howler monkey scowls at us, his 15-strong harem cowering in the background.

On the riverbank, a family of capybara, the world’s largest rodent, resemble grumpy old men, their expressions locked in a permanent frown. Given that they’re bottom of the food chain and the preferred dinner option for most predators, it’s hardly surprising they look miserable.

The sour stench of fishy urine floats upstream, indicating an otter’s den is not far away. We smell, then hear them, their urgent bleating and squealing almost as stomach-churning as their perfume. It’s as if a thousand teenage girls have been granted an audience with Justin Bieber.

As babies scamper up the bank, adults duck and dive for fish, brutally ripping apart their catch.

Above them, exposed tree roots hover in the air, about to plunge their bony hands into the water. It’s a sign of how much the water level has dropped in the past few months, improving our chances of seeing jaguar.

Sadly, luck is not on our side today, and we return home without seeing one of the big cats.

The journey back, though, is far from disappointing. Silhouetted by the setting sun, parched trees appear charred by the burning red sky, as clouds coil like plumes of cigar smoke, twisting and curling upwards.

Nothing can detract from the beauty of this place.

Estimates suggest there are 7,000 jaguars in the Pantanal, Juan tells me, but he suspects there are many more, so our outlook for the days ahead looks positive.

The following morning we head to the Black Water Stream, just off the Three Brothers River. Slowing down the engine, we slowly scan the riverbanks, passing a dead caiman, belly up in the water, its carcass picked apart by vultures.

It’s at this point that I really appreciate having a local guide. Most tourists’ attempts at spotting are pitiful; directing someone to look at ‘that branch’ in dense forest, or ‘over there by that triangle’ isn’t particularly helpful. 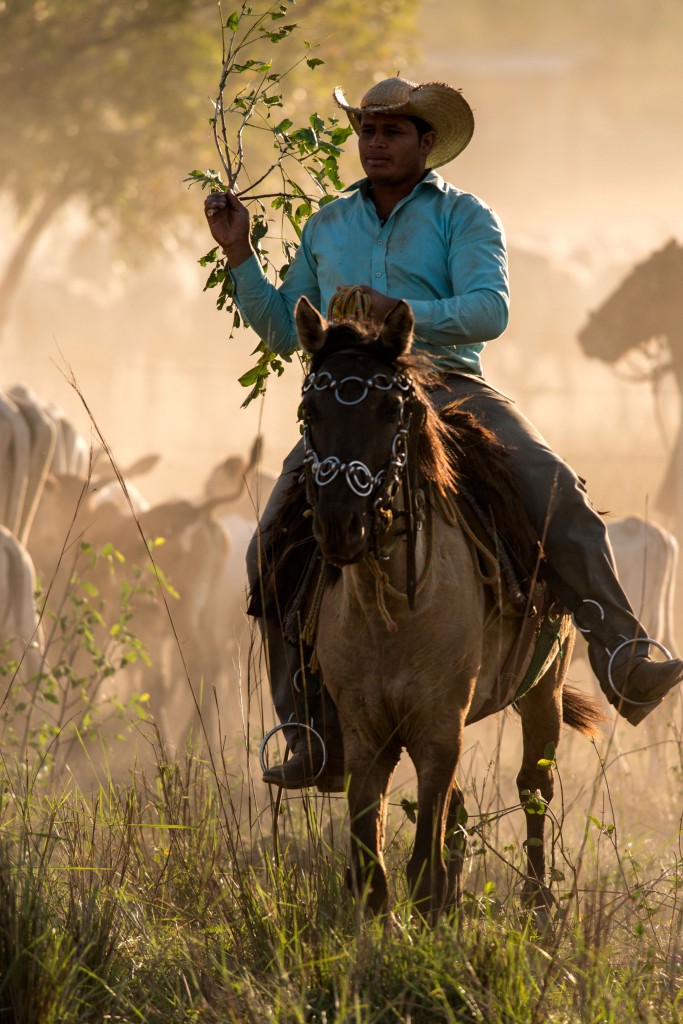 “Are you referring to the isosceles or quadrilateral?” jokes one of our party sarcastically.

“Using local guides not only gives you the best chance to see jaguars,” says Juan, whose grandfather owned a ranch in the area, “but if locals benefit financially, it also helps educate the community about conservation.”

He’s referring to the fact that before jaguars became the focus of a lucrative tourist industry, they were considered a nuisance for killing cattle and were often shot dead.

Then there it is, a flash of a sleek tawny pelt covered in darker rosettes. We sit, and wait. Patience is, after all, the key to wildlife rewards.

As midday approaches, the sun burns at an uncomfortable 34 degrees. Wedged at a 45-degree angle, my knees start to cramp, while meaty black flies feast on my arms and legs.

Finally, the stocky, brash young male slowly saunters into the open, turning his muscular head in our direction and locking his gaze.

His power is quite humbling; his jaw so strong, it can crack a caiman’s skull. “You can actually hear it crunch,” shudders Juan.

Slinking back into the bushes, the apex predator licks his paws and rolls on his back like a domestic cat.

Other boats inevitably join us, but for those few moments, we have him to ourselves.

It’s the first of 13 sightings. From the jaguar swimming through reeds in pursuit of a capybara, to a hulking male sunbathing on a sandbank, every encounter is as charged and exhilarating as the last.

According to Andre von Thuronyi, who runs a farm and the Araras ecolodge, it’s becoming much easier to see these animals in the wild. “It took me 11 years to see my first jaguar, now they’re everywhere,” he tells me.

Originally from Rio, Andre arrived in the Pantanal in 1976 “when the road did”. With a shock of long, wiry unkempt hair, it’s as if he’s embodied the very thing that attracted him here in the first place: the wild.

Armadillo, tapir and deer are just a few of the creatures seen in his hotel grounds, and at breakfast we’re joined by dozens of red-crested cardinals, some so bold they even perch on salt cellars.

Andre wants to encourage other farmers in the area to turn their properties into small scale hotels in the hope more people will realise the importance of protecting wildlife. He understands the threat of jaguars to farmers, and uses water buffalo to protect his own team of 100 Pantanal horses.

I have to agree. But for me, that’s the very draw.

All creatures great and small, the Pantanal has them in abundance.