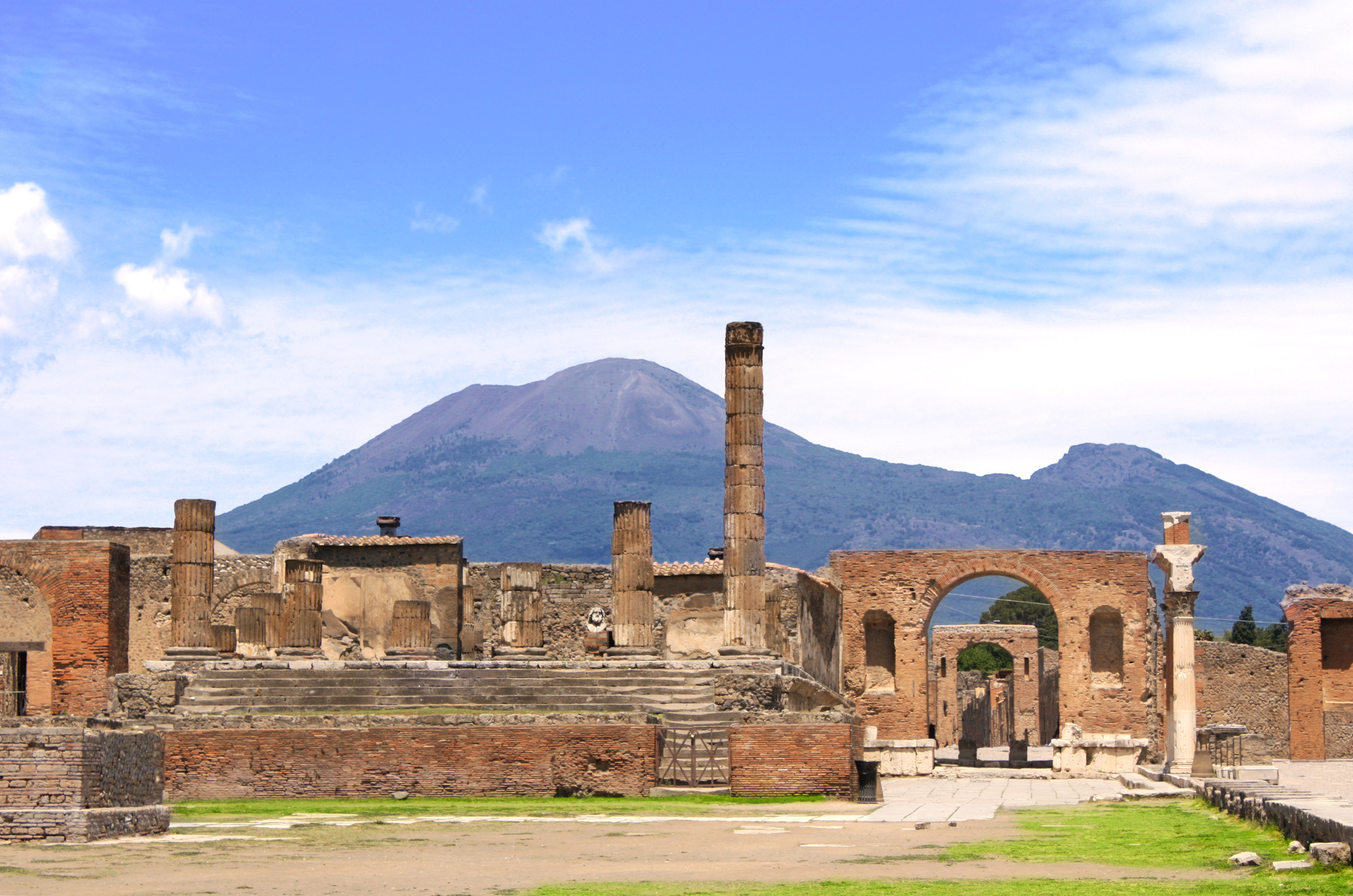 Retracing the glory of Pompeii

As the British Museum stages a blockbuster exhibition on Pompeii and Herculaneum, Kate Whiting visits southern Italy to explore the fascinating archaeological sites and take in the beautiful Amalfi Coast.

At the heart of the Stabian Baths lie two bodies, their bones preserved forever in plastercast moulded into the agonised positions in which they died.

The ancient baths, which two millennia before would have been filled with life, are a strange place to be confronted by death. But it’s inescapable in Pompeii, overshadowed as it is by the blown-apart peak of Vesuvius which wreaked havoc on the Roman town in 79AD.

The tragedy of Pompeii – and its near neighbour Herculaneum – has been the subject of many books and documentaries. Now its the inspiration behind The British Museum’s latest blockbuster exhibition, Life and Death in Pompeii and Herculaneum, which runs until September 29. 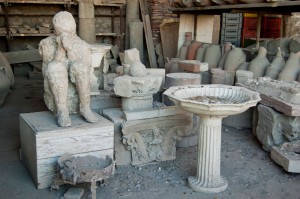 Of the 250 artefacts on display – many taken from the Naples National Archaeological Museum – many are eerily redolent of everyday life: from the carbonised loaf of bread almost identical to some I’ve seen in Tesco, to the ceramic pot of toothpicks (albeit made from bone).

But it’s hard to take in the scale of what unfolded on that fearsome August day until you’re actually standing in the forum of the ghost town itself, with Vesuvius lurking on the horizon, and picturing the panicked Pompeians fleeing from the falling ash.

On our visit, only the spring sunshine is beating down on myriad huddles of tourists being led around. Our guide, Lia, has been coming here for 20 years and wends her well-trodden way through the cobbled streets to show us the highlights of the wealthy inhabitants’ abodes, including the House of the Menander with its fresco-covered alcove still holding the worn heads of household gods.

The brothel is another must-see of Pompeii, although it’s a blink-and-you-miss-it affair. It’s a small building and there are always crowds wanting to see the frescoes depicting various sexual positions on the walls, and the five cell-like rooms with stone beds where services were ‘rendered’.

Pompeii was a thriving business centre, where fish sauce, or garum, was sold in stone amphorae and slaves could aspire to earn their freedom. Herculaneum, on the other hand, was more of a high-class seaside resort. Back then both towns were on the coast, although you wouldn’t believe it today, as the sea is out of sight. But the boathouses in Herculaneum, where hundreds tried to shelter and perished, are clearly visible along what would have been the old shoreline.

In 79AD wealthy Romans would have come here from Rome on their holidays. Now, tourists from all over the world come in their millions to marvel over the surviving carbonised wood room dividers and still-bright frescoes.

The entire Bay of Naples has become something of a tourist hotspot – and it’s easy to see why the ancient Romans loved it so much. Today, the town of Sorrento makes the perfect base for forays into Pompeii and Herculaneum and, for those who dare, up Vesuvius.

We stay at the Imperial Hotel Tramontano, which commands an enviable clifftop location with views across the bay to a hazy Vesuvius. Formerly a mansion, and decorated with sumptuous antique furniture, it boasts an impressive list of literary visitors, including Milton, Ibsen and Last Of The Mohicans author Charles Fenimore Cooper, and the West Wing was the birthplace of Italian poet Torquato Tasso.

As the sun dips in the sky, the balmy warmth of dusk draws people out into Sorrento’s narrow cobbled lanes for a pre-dinner wander – a ritual that’s very easy to adopt.

Ducking down a side street off the Piazza Tasso, we find a pizzeria called Basilica – and indulge in our first of many real Italian pizzas, mine complete with artichoke hearts.

Every restaurant in Sorrento serves a shot of chilled Limoncello, lemon liquor, as a little extra after a meal. It’s a sweet and sour speciality of the region, which is known for its lemon groves – in fact you can barely walk down a street without passing a lemon tree.

Our favourite spot in Sorrento is easily the cloisters of the church of San Francesco, which offer a small dose of tranquillity – if you time it right and avoid a bus-load of tourists. With its tumbling wisteria and central weeping willow, it’s also a popular location for Brits to get married.

As pretty as Sorrento is, there’s absolutely no contest when you travel along the Amalfi Coast to Ravello, perched high in the cliffs. Our driver, Enrico, takes it very steady along the twisty coastal road which passes through the hotspots of Positano (a favourite of Russian tycoon Roman Abramovich) and Amalfi itself.

Until 1200, Amalfi was one of Italy’s four maritime republics and the wealthiest liked to live just up the hill in Ravello. Today, the town has just 2,500 inhabitants, but in the 12th century there were 25,000, including a disproportionate number of palazzi owned by the mercantile nobility.

The most famous surviving palazzo is that owned by the Rufolo family – the Villa Rufolo – off the main piazza and next to Ravello’s duomo (cathedral). Built on a ledge towering above the sea, it inspired Richard Wagner’s set design for his opera Parsifal and is the setting for concerts during Ravello’s annual classical music festival.

The gardens are impressive, but not as much as those at the lesser-known Villa Cimbrone, which more than reward the visitor who hikes up the cobbled street out of Ravello to see them.

Ranging over several acres and terraces at different heights, the garden at Cimbrone is filled with statues, temples and grottoes and boasts the most breathtaking view in Ravello, from the Terrace of Infinity.

To make ourselves feel like nobility, we stay at the Hotel Caruso, part of the Orient-Express group, and itself a former palazzo. Its ancient walls and fresco-covered ceilings have been carefully preserved and it has, to my mind, the world’s most spectacular infinity pool with a 360-degree view of the sea on one side and the hills, cut into terraces of lemon and olive trees, on the other.

The poolside bar has its own wood-fired pizza oven, serving tables on an immaculate lawn overlooking views of the rugged coastline.

The next morning, after breakfast served on our balcony, we take advantage of the hotel’s daily complimentary boat trip from Amalfi, along the coast to Positano, famous for its colourful houses stacked up the hillside. From the sea, you get a unique a take on the coastline, as castles on rocky outcrops and luxury villas of the rich and famous drift by.

Back at the hotel, I enjoy a relaxing manicure before dinner of locally-caught amberjack fish in the hotel’s restaurant, overlooking the twinkling lights of neighbouring towns around the coast. It seems a world away from the tragedy of Pompeii, but I can’t help thinking the luxury-loving Romans would have approved.

Kate Whiting was a guest of Citalia (0843 770 4443; www.citalia.com). A week’s holiday combining four nights at the Imperial Tramontano Hotel in Sorrento and three nights in Ravello at the five-star Hotel Caruso, part of Citalia’s Exclusive Collection, start from £1,235 per person, including flights from London Gatwick with BA, transfers and breakfast. One free night is included at each hotel, along with a saving of £775 per couple. Based on departures 16 October 2013.

Day trips to Pompeii and Herculaneum are also pre-bookable with Citalia and start from £32 per person.