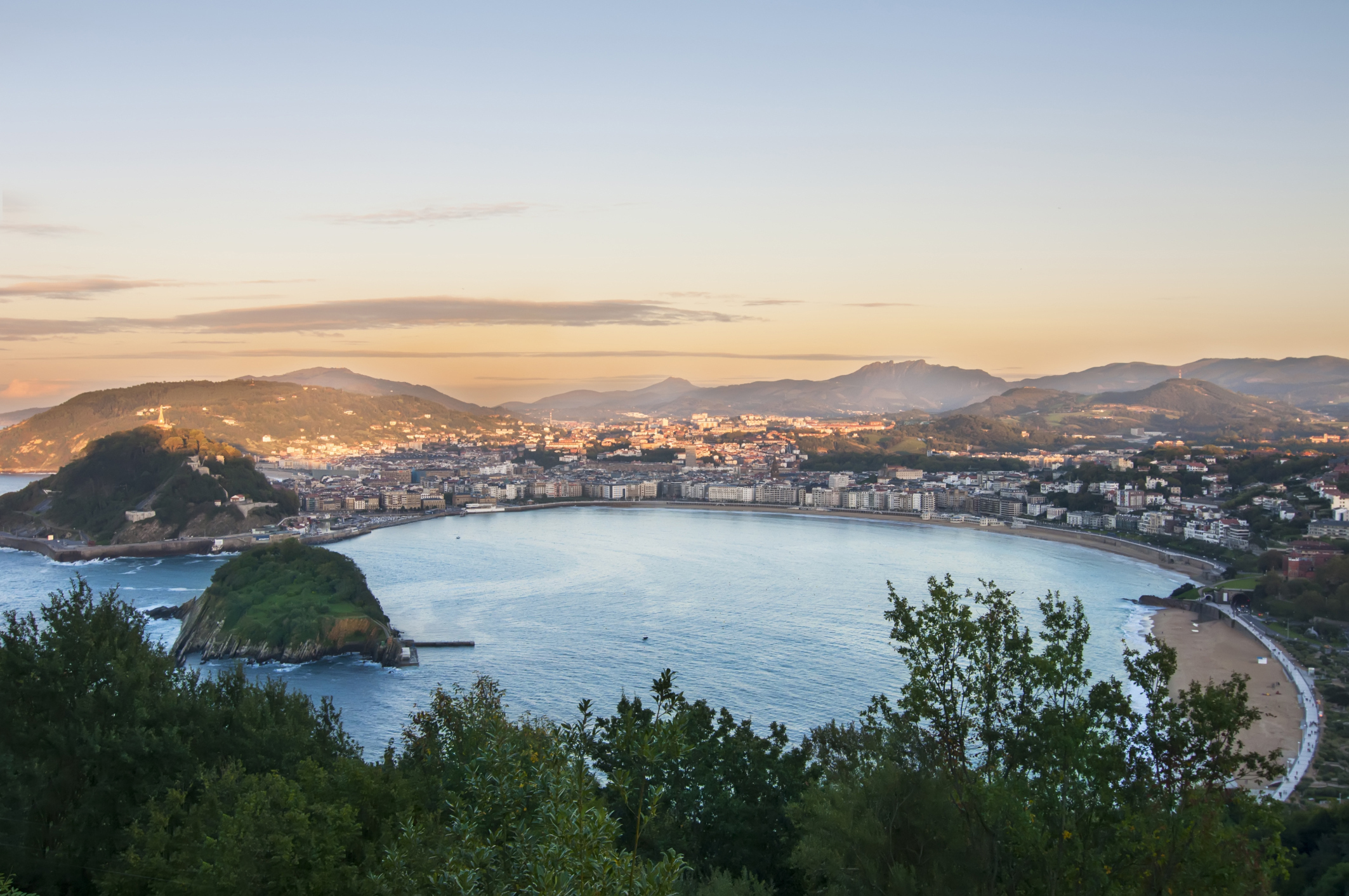 Space-age encounters on the Pilgrim Trail in Spain

With Spain tipped by the Post Office to be the cheapest European destination this summer, Tony Looch takes a coach trip through the north and discovers a wealth of history and impressive architecture.

The throb of Spanish guitars and the frantic click of castanets provided thrilling accompaniment as I was swept by coach into the Basque country.

Our guide had decided to enliven our journey with music and could not have chosen a more appropriate CD to soundtrack the dramatic scene outside.

On either side of the road, jagged black and yellow mountains reared up like the teeth of prehistoric monsters. I was entranced and, on my first visit to Spain, already succumbing to the country’s magic.

I had arrived by air in Madrid from London, the previous day, to join a luxury coach tour. There was time for a few hours’ sightseeing in the city, with its wide, tree-lined avenues and magnificent buildings, but the main purpose of our visit to the Iberian Peninsula lay elsewhere.

Now we were being driven many miles north to San Sebastian, in the Basque region, on the Atlantic coast. This area tends to be overlooked by overseas visitors, who are more drawn to the warmer south, and it is true that outside the summer months the weather can be capricious in the north, but, as I discovered, it is well worth exploring at the right time of year.

Our tour would begin in San Sebastian and take us west, by coach, via Bilbao, Santander and Oviedo, to Santiago de Compostela, venerated by countless Christians as a holy city.

For me, it was the best way to see Spain – from the inside of a comfortable, air-conditioned coach containing a loo, with a safe driver at the wheel and a good guide who spoke excellent English.

Driving my own car would have posed too many hazards and the bothersome necessity for endless consultation of maps and guide books. In addition, Spain, like England, is very much a one-language country, and my command of Spanish amounts to about six words.

At last, after a journey of a few hundred miles, we arrived at the fashionable resort of San Sebastian. It is not far from the French border and has a superb beach and an Old Quarter, and is set on the sweeping La Concha bay.

On foot, we ascended the steep Monte Igueldo and were rewarded with a magnificent panorama of the town and bay, and the large island at the bay’s entrance.

San Sebastian is full of smart shops and restaurants, with high prices to match, even in small cafes, but this is not surprising in a resort popular with celebrities and which hosts Hollywood stars.

On the promenade beside the sea, stands the still-controversial ultra-modernist 1999 Kursaal, designed by Italian architect Rafael Moneo.

It consists of two huge, linked cube-like glass buildings, where conventions, exhibitions and, above all, the famous annual San Sebastian international film festival are held.

Unfortunately, by day the bland Kursaal looks as anachronistic as a Challenger space rocket beside the ornate, old-fashioned buildings around it, but when illuminated at night it is transformed into a focal point of great beauty.

I was keen to sample unusual dishes from the local Basque cuisine, which is well regarded by gastronomes everywhere. The food runs heavily to exotic stews and bean dishes and is rich in fish and seafood.

One item I had as a snack lunch in a cafe was squid served up with rice and a sauce made from its own “black ink”. It sounded disconcerting but I forged ahead and found it tasty, even the ink. The same night in a restaurant I enjoyed “cheek of pig”, a wonderfully tender dish with an unfortunate, though accurate, name.

The next day we moved on to Bilbao, calling en route at the picturesque old fishing town of Getaria, containing the 14th-15th century Church of San Salvador.

Our drive then took us along a coastline called the Costa Vasca, with alpine-type scenery studded with beech and oak trees and more fishing villages. 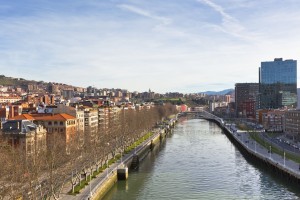 Bilbao is the 10th-largest city in Spain and the capital of the autonomous community of the Basque country. It was heavily industrialised right into the 20th century but things have moved on. Its buildings have been cleaned up and the city now focuses increasingly on services and culture, rather like London.

This process has been vastly accelerated by the presence of the famous Guggenheim museum and art gallery, completed in 1999. The shape and exterior of this astonishing building, whose architect was Frank Gehry, almost defies description. Clad in glass, titanium and limestone, it undulates like a huge beached whale on an open space beside the river that runs through Bilbao.

Driving on to Oviedo, we called in at the medieval village of Santillana del Mar, with its cobbled streets and quaint stone houses decorated with carved heraldic symbols. Many writers have described it as the most beautiful village in Spain and, although hardly anyone lives there now, it remains a popular tourist attraction.

Our journey continued through the spectacular mountains and gorges of Picos de Europa, Spain’s second-largest national park, where we visited the holy cave of Covadonga.

Here a shrine exists to King Pelayo, who achieved the first Christian victory over the Moors in about 722, which is regarded as the start of the ultimately successful move to drive them out of Spain. The imposing shrine is set in a cave in an almost vertical cliff, with a waterfall thundering below and a beautiful church perched on heights nearby.

We moved on to the Cantabrian capital, Santander, which contains the imposing headquarters of the bank, now a household name in Britain. This resort was especially popular with wealthy British tourists in the 1920s and it is easy to visualise them wining, dining and dancing the tango in the splendid old hotels that still line the seafront.

Oviedo, capital of the Asturias region, was our next port of call. It is famed for being a clean, well-kept, pedestrian-friendly city and its attractive street furniture includes many eye-catching modern statues.

There are two centres in Oviedo – the more contemporary shopping area and the medieval quarter around the ancient Cathedral of San Salvador. This contains a huge, golden 16th century altarpiece portraying the life of Christ, in a series of pictures set in niches. Lit up, the altarpiece turned into one of the most beautiful objects I have seen in my life.

Our tour ended in Galicia’s capital, Santiago de Compostela, in whose gloriously ornate 12th century cathedral are interred the reputed remains of Christ’s disciple, St James. The other-worldly atmosphere inside the cathedral’s huge gloomy interior, where people have worshipped for about 1,000 years is, to say the least, humbling.

The sacred tomb there has made the cathedral a place of international pilgrimage, and every year thousands of people walk for hundreds of miles to come and pay homage – even from other countries. I saw some of these youngsters, with their wooden staves, and I, who hold no brief for any particular religion, was both impressed and moved by their devotion to their faith.

And so my tour ended. I had enjoyed excellent accommodation and meals, and seen amazing art and architecture, both ancient and modern. I returned to London with indelibly vivid memories of a country whose history and culture are awe-inspiring.

Tony Looch travelled with Insight Vacations on its premium 11-day Northern Spain holiday. The itinerary starts in Madrid with stays in Santiago de Compostela, Oviedo, Santander, San Sebastian and Barcelona, visiting towns, villages and places of interest en route, such as Covadonga, Bilbao, Pamplona and La Rioja. It costs from £1,965 per person including return international flights, VIP UK airport transfers within 150 miles, bed and breakfast accommodation, some meals, sightseeing and activities, travel in comfortable business class coaches and the services of an expert tour director throughout.