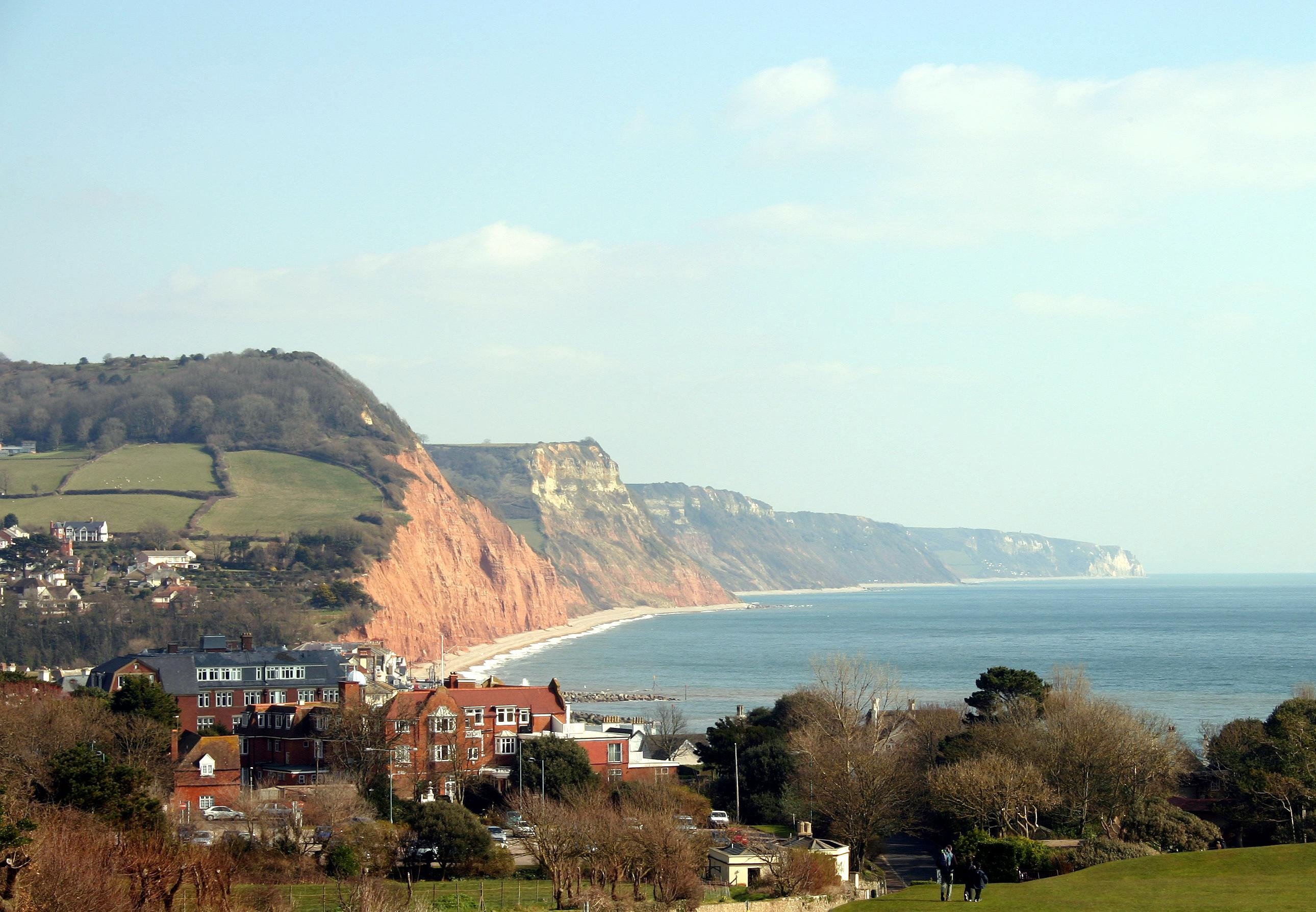 The easy life in East Devon

In its calm, unhurried way, East Devon is re-emerging after a terrible pasting from very poor summer weather, and it makes a perfectly cosy place to while away a crisp, long winter weekend.

Welcome to a gentler pace of life, where shop assistants have time to talk and jot down the prices of three or four items to add up (by themselves!) when your order is complete.

This is what happens at a splendid deli in Sidmouth, the jewel on this stretch of the coast. The seaside town which entranced Regency England and fascinated Queen Victoria is maintained so well that more than 500 buildings are listed for architectural interest, including a splendid Georgian terrace on the Esplanade.

Little seems to have changed here since the Fifties, as we reflect when we take a tip from broadcaster Jeremy Vine and pause for tea and fairly pricey cakes at Mocha, on the Esplanade. How strange to see an English seafront with every building in a perfect state of repair!

One morning, we leave the car on Salcombe Hill, circle the Observatory, and walk down the hill on the South-West Coastal Path as a panoramic view of the town opens up before us.

The red cliff face of Peak Hill sits like a giant bookend on the far side of the town and beyond Sidmouth’s small strip of sandy beach below Jacob’s Ladder.

Local food and drink is another East Devon speciality: in The Holt at Honiton, a pine-tabled gastro pub included in the 2012 Good Food Guide, I ask the cheery fellow on the bar why the pub makes such a show of local Otter beers.

He replies, “Well, Dad runs the brewery!” and we load the boot with some Otters before our journey home.

The base for our week is a courtyard of converted stone barns a mile or so inland of the Lyme Regis-Exmouth coast road.

Higher Wiscombe is part of the Premier Cottages consortium, which boasts five-star self-catering few rivals are able to match.

Owners Alistair and Lorna Handyside sunk around £1.5 million into their complex which is so far from the road that a water diviner was called in to find the nearest well. At night, the only light is from the stars above.

Whatever the season, almost any holiday in Devon includes at least one day when the rain never stops, and soggy clouds sit motionless on the hills.

That’s when posh self-catering comes into its own. Our three-bedroom Thatched Barn has underfloor heating, remarkably comfy beds from a British firm (Mattisons), and views (on bright mornings) when it’s worth setting an early alarm to catch shafts of sunlight climbing up the hill across the valley.

From Higher Wiscombe, there is plenty to explore within a half hour’s drive.

Beer, a seaside village which has lately gone up in the world, is just down the road. At night, its restaurants are heaving.

Almost on our doorstep is the famous Donkey Sanctuary outside Sidmouth, where donkeys in serene and no doubt well-deserved retirement munch the greensward and stroll with the swagger of Eton boys – as well they might, given the massive lists of bequests recorded around the complex.

In the other direction lies Seaton, where once-heaving holiday camps have made way for a gleaming new Tesco.

The big attraction now is beguilingly olde worlde: on the Seaton Tramway, electrically-powered open top double deckers clank their way past the mudflats of the Axe Estuary Wetlands and on to the village of Colyford, where the Tramstop restaurant serves up local produce from the station master’s garden.

Our visit to Lyme Regis (just across the Devon border in Dorset) begins with stunning views of The Cobb – alas without a shrouded Meryl Streep perched hauntingly on the far end – and the curve of Lyme Bay stretching more than 20 miles past Portland Bill.

The original streets and buildings of Lyme Regis remain largely intact: we settle for some scrumptious local crab meat in a seafront sandwich bar beside The Philpot Museum.

The elegant voice of The French Lieutenant’s Woman’s author John Fowles, which, along with the Meryl Streep film, put the historic town back on the map, is audible on headphones.

There’s also a splendid section on Mary Anning, whose passion for fossils on the Jurassic Coast unlocked some of the mysteries of Prehistoric Britain. This museum is well worth the £3.45 entry fee.

When the rains come, the obvious solution is a good lunch – and we manage to discover two of the best restaurants in the region.

In the carpet town of Axminster, The River Cottage Canteen and Deli in Trinity Square is hidden behind steamed-up front windows. Once inside, we find a queue for seats in the wide open space which once provided the town’s ballroom.

This is part of the empire of TV chef Hugh Fearnley-Whittingstall, its dishes based on produce from local farms and fishermen. As my wife salivates over her dish of pork, I cast an envious eye over sheepskins on the walls selling at £55 a pop.

Nearby is Park Farm, the base for Fearnley-Whittingstall’s TV company. It isn’t open to the public on a daily basis, though cookery courses lasting from one to four days make great ‘foodie’ gifts.

From Spring, you’ll also be able to witness one of the region’s most beautiful carnivores in action: Samson the Russian golden eagle.

Based at Escot, a stately home turned wildlife park near Ottery St Mary, Samson does breathtaking aerial displays along with other birds of prey.

Even Sir David Attenborough might scratch his head at the curious slice of wildlife on display at Escot.

Besides Samson, dumped in a wardrobe when a Russian drugs baron tired of him, there’s a rare breed of red squirrel, caged in to fend off predators, and wild boars sprawling in so much mud that it’s hard to tell whether Mum knew she had just produced a baby.

While Samson and friends dive for raw meat through crowds, your luck is a long way out if you get hit by a golden eagle in East Devon.

There’s a fascinating backstory too at The Salty Monk, in the Sid Valley, a solid 16th century building once used by Benedictine Monks who traded salt at Exeter Cathedral.

Annette and Andy Witheridge bought it as a boutique B&B in 1999 and have extended the building ever since: the latest addition is a mini spa with outdoor sauna, hot tub and fitness studio where you can join yoga classes or book a workout.

Andy, whose star-studded CV includes Scotts of Mayfair, Gidleigh Park and Gravetye Manor, is a dab hand at DIY: his luxury suite is a hit with newlyweds bound for exotic honeymoons.

“So many guests go on to Cornwall,” says a puzzled Andy, “when there is so much to see and do around here!”

When you find the best of East Devon, you’ll see his point of view.

:: BEST FOR: Walks on South West Coastal Path (Beer-Branscombe is an attractive stretch), local pubs like the Mason Arms in Branscombe, fine restaurants.

:: TIME TO GO: All year round; every season’s charming in its own way.

:: NEED TO KNOW: The A303, heading South-West from the M3, has pinch points, notably Salisbury Plain and Stonehenge.

:: DON’T FORGET: Walking togs to keep dry in the rain.

For fine eating in Devon, see The Trencherman’s Guide at www.saltmedia.co.uk.