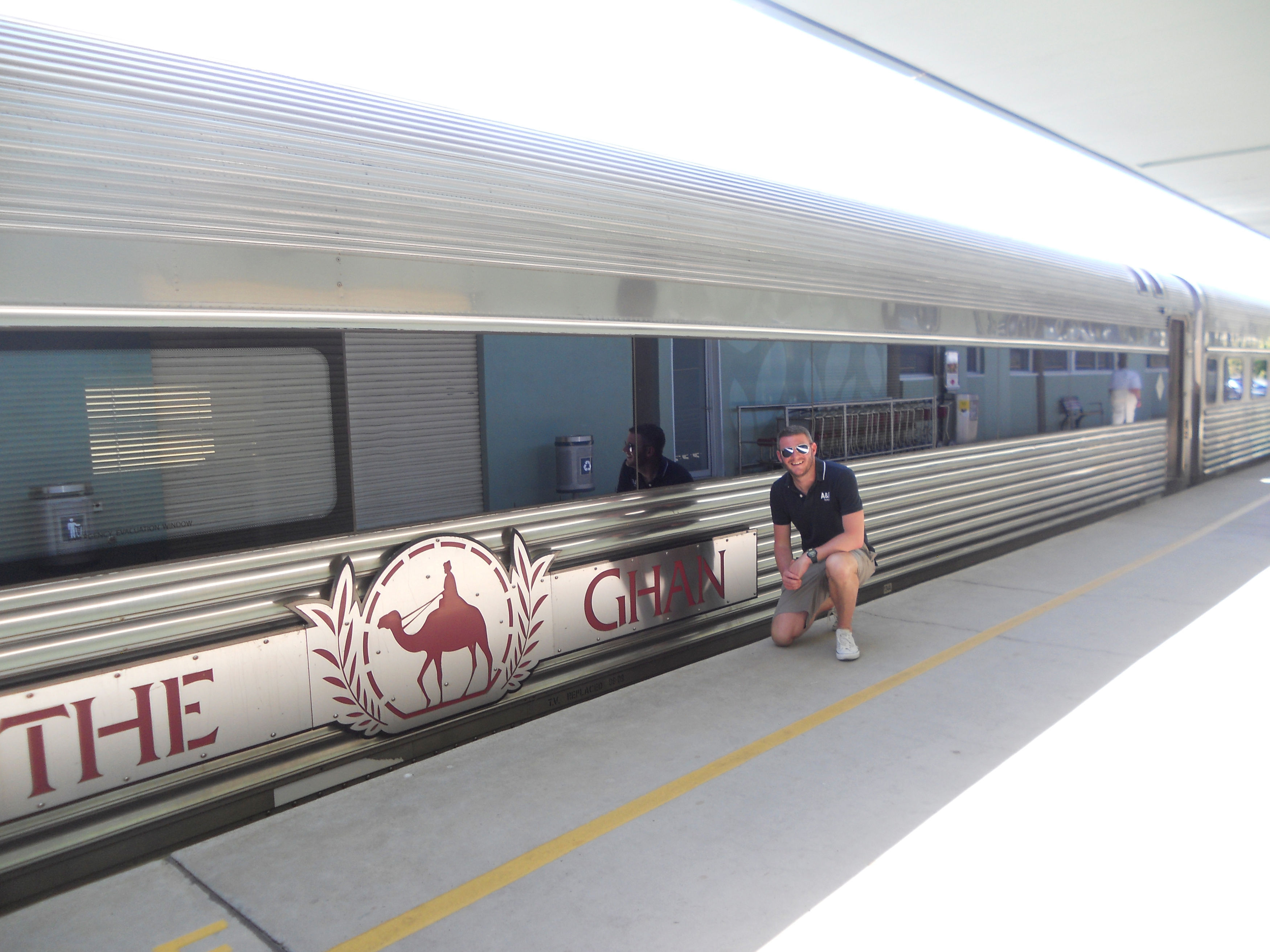 Happy Ghanniversary to an Aussie icon

It’s 10 years since The Ghan made its maiden trip across Australia. A decade on, Richard Jones finds that the iconic train is still very much on track

However, it wasn’t the popular ex-politician, the platinum-selling Australian Crawl musician, or even the spectacular fireworks put on by those responsible for the New Year’s display at Sydney Opera House, that the residents of Pimba (population 50) had gathered to see.

No, the main star of the show on this hot, dusty evening in the middle of the Aussie Outback was a train.

It’s 10 years since The Ghan made its maiden cross-continental journey all the way from the bottom of South Australia to the top of the Northern Territory, and the original staff, drivers and passengers from a decade ago, along with other lucky newcomers like me, were celebrating the milestone as part of a commemorative ‘Ghanniversary’ trip.

What makes The Ghan so unique and special is its back story.

Its moniker is an abbreviated version of its previous nickname The Afghan Express, and honours the camel drivers who arrived in Australia during the late 19th century to help find a way to traverse the country’s vast unexplored interior.

Back in 1929, the very first Ghan departed Adelaide bound for the town of Stuart (now Alice Springs).

It was always intended that the line would eventually be extended all the way to Darwin, the service becoming transcontinental.

Following decades of wrangling and deliberation, The Ghan left Adelaide on February 1, 2004, bound for Darwin.

Its arrival in the city signified a new era of tourism in the Northern Territory, making travel easier as well as providing better access for Aboriginal communities in the region.

Following a flight with Singapore Airlines and sister line SilkAir, I began my Aussie journey in Adelaide, which is regularly voted among the top 10 cities to visit, not just Down Under, but around the world.

There’s plenty to see and do, including the newly redeveloped Adelaide Oval, Rundle Mall shopping area, plus great bars like Clever Little Tailor.

However, Adelaide’s main appeal is that it’s a gateway to many of South Australia’s main tourist attractions, including the nearby white sandy beach resort of Glenelg, the Barossa wine valley and the nature reserves on Kangaroo Island.

Adelaide Parklands Terminal is the starting point for a northbound Ghan journey, and from speaking to my fellow passengers it’s an excursion that’s high on many Australians’ and rail enthusiasts’ ‘bucket lists’.

The sheer size of The Ghan is staggering, a fact that was outlined in a recent episode of Channel 5’s Chris Tarrant: Extreme Railways.

There are two engines pulling up to 43 carriages and car transporters, and at over 1km in length it takes good eyesight to be able to see from one end of the shiny silver behemoth to the other.

Train carriages in general are far from spacious – but the clever design of The Ghan means every millimetre of space on board is utilised perfectly.

Nevertheless, walking down the narrow dark timber corridors on an evening followed by a stranger can still make you feel like you’re in a scene from Murder On The Orient Express!

There are three choices of accommodation, including the Red seats, which are pretty typical of first-class areas on UK trains.

However, I find The Ghan to be a kind of cruise on land, and to get a true taste of the train’s magnificence, you need to stay in the Gold or Platinum cabins which offer pull-out beds, wardrobe space and a safe, plus as much food and drink you can get down you.

When you consider the size of the tiny kitchens on board, the cuisine is nothing short of mesmerising.

During my three days on board, I eat like a king (or at least like a pop star or former Deputy Prime Minister), tucking into full Australian breakfasts (with Vegemite on toast, of course) and a variety of grilled delicacies, including saltwater barramundi, emu and kangaroo for lunch and dinner.

In between the eating, drinking and resting, the hours whizz by.

With an intermittent phone signal and no TV, radio or internet on board, it feels like I’m in my own peaceful little bubble.

I find myself hypnotically staring out of the window for minutes, sometimes hours, on end, as the scenery changes from the parched farmlands of South Australia, past rivers and ocean, to the notoriously harsh red centre and termite mound-littered Outback, before arriving in Crocodile Dundee land – the bush and swamps of the Northern Territory.

I also play frequent games of animal-spotting with other passengers – I clock a court of kangaroos and flock of emus, while my companions pick out water buffalo and crocodiles.

After our stop off in Pimba, we arrive in Alice Springs the next morning.

A fun way to spend a few hours just outside Alice is at Pyndan Camel Tracks.

My guided camel ride around the farm gives me a small taste of how life must have been for the Afghan drivers who made the journey through Australia’s harsh interior.

Then it’s on to Katherine the following day, where guests can take a tour of the town to sample the local indigenous population’s culture – didgeridoo playing, kangaroo skinning and cooking and a variety of arts and crafts.

We climb aboard a powerboat for an exhilarating ride through the gorges of Nitmiluk National Park.

After three days on the tracks and 1,851 miles on the clock, we arrive at our final destination – Darwin.

The Northern Territory’s capital is something of a party city and there are a lot of influences from Asia, due to its close proximity to the continent, combined with a significant Aboriginal population.

There are plenty of bars and restaurants in the Waterfront area, which is a short walk to the hub of the city, Mitchell Street – home to Darwin’s most famous tourist attraction, Crocosaurus Cove.

Here I hold snakes and a baby crocodile, before feeding lunch to one of the Cove’s famous residents – a 6m saltwater croc called Chopper.

But not even Chopper’s healthy appetite and persuasive smile could steal the limelight from the real star of my time in Australia – The Ghan.

About 50 miles south of Darwin, another set of locals put on a show to mark the passing through of what is rightly regarded as one of the greatest trains on Earth.

Back in 2004, around 400 residents from the town of Livingstone had greeted the passing of The Ghan with a collective ‘moon’, said at the time to be partly a cry for free speech to the dignitaries on board, but also a mark of affection for the engineering icon passing through their town.

And they are here, baring their backsides again, in 2014.

Gazing out at the moving scenery as the train ploughs along, it gives a whole new meaning to the term ‘rear window’.

However, the “21 bum salute”, as the local newspaper called it the next day, was just as poignant, and perhaps even more typically Australian, than the star-studded concert two days earlier.

:: For more information on visiting Darwin and the Northern Territory see www.australiasoutback.co.uk