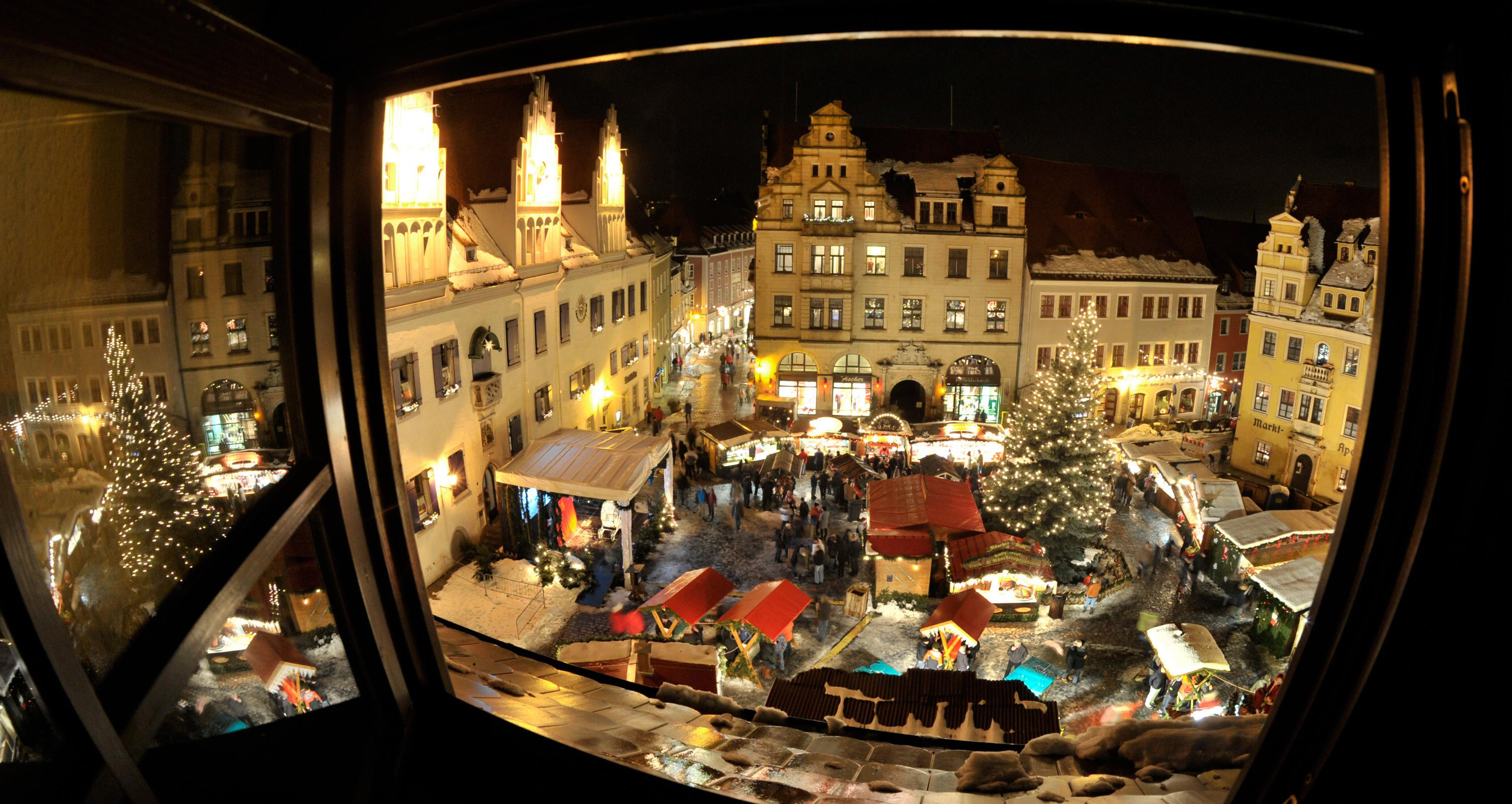 When it comes to Christmas shopping, few countries can hold a candle to Germany. Its traditional Christmas markets have been creating the wow factor for more than six centuries.

Back in medieval times, end-of-year markets sprung up as social gatherings where people could enjoy a little excess before the onset of bitter weather.

They traded preserved fruit, jams, home-made wine and heavy fruit cakes, all designed to keep families going during the long cold weeks ahead. It was only during the 15th century that these gatherings came to be identified with Christmas.

Today, Germany’s Christmas markets open on the first day of Advent in mid-November. In most places, the routine has hardly changed for a century or so.

Each region in Germany has its own style, so I targeted Thuringia, north of Bavaria and between Saxony and Saxony-Anhalt. Tour operator Dertour fixed flights into Frankfurt for speedy ICE train links to Eisenach, Erfurt and Dresden.

At Eisenach, with its wonderfully preserved Old Town, the Christmas market is in Wartburg Castle, a UNESCO World Cultural Heritage building dating to 1067 and perched on top of a large hill overlooking the town.

Here, in 1522, Martin Luther found refuge for 300 days after he was declared a heretic and outlaw at the Diet of Worms. In secure and comfortable rooms, he translated the bible into German.

We got into the Christmas spirit, literally, with the first of many glasses of Gluhwein (mulled wine). Hot and spicy, it’s usually made from red wine, but in many places there’s a white wine alternative – and if you pay extra, you can keep the decorated mug as a souvenir.

The aromas of the market are amazing. Although we had had a marvellous meal at the castle’s restaurant, we couldn’t resist the food stalls to sample some quite delicious bratapfel (baked apples) and maronen (roasted chestnuts).

The castle hosts top-quality Christmas concerts too: we were entertained by a German vocal ensemble who sang carols in English and German, and some jazzy numbers too.

Eisenach also has the Bach House (Bachhaus), the first museum in the world to be dedicated to the life and work of Johann Sebastian Bach. It opened in 1906 in a building near where Bach was born in March 1685.

The music room houses instruments which Bach would have used – a chamber organ, spinet, clavichord and harpsichord – and there are daily concerts by trained musicians.

Next stop Erfurt, the regional capital and one of the most beautiful and oldest cities in Germany, which was founded in 742. Its Old Town of half-timbered houses and cobbles in front of the Cathedral Square (Domplatz) is another perfect setting for a Christmas market.

Visitors’ eyes are immediately caught by the 40ft Christmas pyramid, telling the story of Erfurt’s history and the people who shaped it. The central Christmas tree, covered in candles, has a Nativity scene containing 14 hand-carved, life-sized wooden figures.

With more than 200 little wooden stalls in the Christmas market, there was so much to buy, eat and drink. I sampled spicy Thuringian bratwurst and lebkuchen (gingerbread) and bought some Erfurt stollen.

There were delightful pottery and Christmas decorations, ornaments, marionettes and lambskin shoes. I bought traditional German gifts: a hand-carved Christmas pyramid topped with a fan driven by the heat of the candle flame; a nutcracker painted like a soldier, and an incense smoker that looked like a bearded dwarf (symbolising incense brought by the Three Wise Men).

Our next train journey took us to Dresden, which has risen again from the ashes of the Second World War.

Baroque buildings like the Semper Opera House and the Zwinger Palace are magnificently restored to their former glory. The Frauenkirche (Church Of Our Lady) was rebuilt in time for Dresden’s 800th anniversary in 2006.

Dresden’s largest Christmas market, Striezelmarkt, is one of the oldest in Germany, launched in 1434. It gets its name from Hefestriezel, a sweet delicacy later called Dresden Christollen (Christmas cake), a delicious, sweet bread.

There were more traditional Christmas goodies by the bucketload and, of course, plenty of food stalls providing food, sausages and Gluhwein to recharge our batteries.

One thing you don’t find in most German Christmas markets are mass-produced cheap plastic toys. Everything is traditional and hand-made regionally, the quality so high that even a ‘little something’ is likely to be treasured.

Wood carvers, glass blowers and bakers demonstrated their skills and a cute ‘bakery crèche’ looked after the toddlers while parents shopped. Bakers showed the children how to make biscuit dough, rolling and cutting it into shapes at lightning fast speed.

The market’s famous Christmas pyramid, one of the world’s largest, is decorated with Nativity scenes and life-size angels and has the world’s biggest nutcracker.

Try to catch two other markets in Dresden. At the Medieval Market in the Royal Palace Courtyard, stallholders wear period costumes and entertainers include jugglers, fire-eaters and choral singers.

The Victorian Market, in front of the Frauenkirche, is like walking into a scene from Charles Dickens’s A Christmas Carol.

Many visitors to Dresden also find time for the nearby Meissen porcelain factory. On a guided tour, we saw how crockery, figurines, vases and even jewellery are created from a lump of clay.

We lunched at Meissen’s oldest restaurant, the Vincenz Richter. The charming house was built in 1523 and in 1873 Richter, a general in the emperor’s army, opened a family-run restaurant business which to this days serves wonderful, locally-sourced food.

The advantage of visiting Christmas markets with Dertour is that most packages are tailor-made, with hotels, restaurants, rail tickets, flights and car hire fixed to suit your individual timetable.

The company is part of a mighty German conglomerate which has the muscle to deliver some keen prices at a time when many centres in Germany are heaving with tourists.