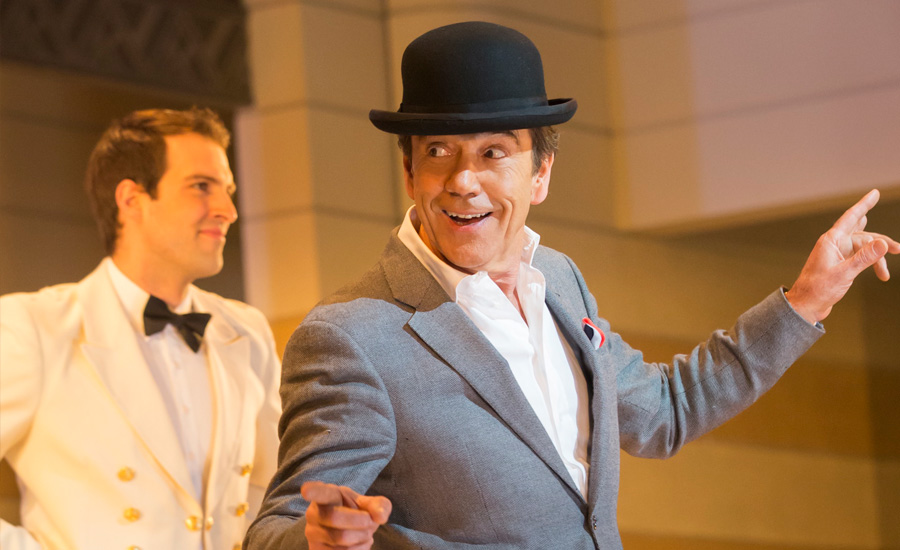 What is it about Robert Lindsay? There doesn’t seem to be another actor like him.

His dazzling performance in Dirty Rotten Scoundrels confirms something that audiences have known about him all along: that they don’t make ‘em like that any more. As super-suave conman Lawrence Jameson, who charms diamonds from gullible ladies with tall tales of neediness, he is in his element. It’s in the swivelling hips and cheeky winks and twinkling grin, in the aura of sheer complicity he brings with him onstage. His entire stage presence exudes an understanding that we’re all in this together, star in the spotlight and audience in the back row of the royal circle.

That performance is what has made Dirty Rotten Scoundrels at the Savoy Theatre, a must-see for anyone who loves musical theatre at its most unapologetically entertaining.

It’s hard to credit it, but Lindsay is an infrequent visitor to musical theatre. He made his name all those decades ago leaning on a lamppost and doing the Lambeth walk in Me and My Girl. His cocksure cockney costermonger Bill Snibson brought him an Olivier and a Tony and established him as a copper-bottomed star. For three years he was the toast of the Great White Way. He had the patter and the shtick and he feverishly invented stage business to milk the moment every night.

The same gifts was still clear when in 2007 he took on the showboating role of John Osborne’s washed-up footlights man Archie Rice in The Entertainer. Every night he came down to the lip of the vast Old Vic stage and, with effortless command, joshed with the heckling audience.

Truly, he is the last of the good old-fashioned vaudevilleans. And yet, and yet. It’s certainly never how Lindsay thought of himself. Although his mother taught him to dance in the intervals of bingo nights when he was growing up in Ilkeston, he did no singing or dancing at RADA. He made his hoofing debut only after playing football one afternoon in Exeter. He broke John Nettles’ leg in a tackle and was obliged to replace him as the lead in The Boyfriend. He did the rest of the run. He was soon taking over from David Essex in Godspell. 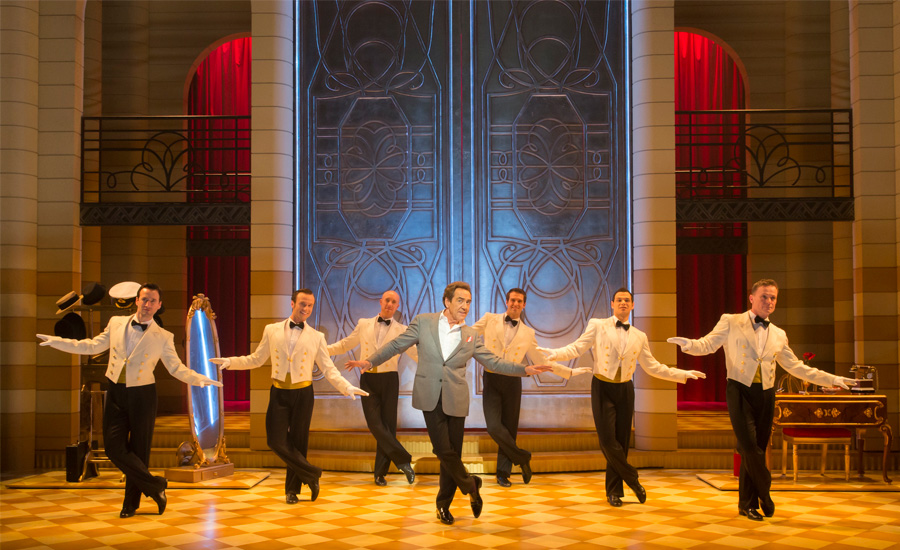 To play a musical turn takes charm and a good set of chops, but there has always been far more to Lindsay than that. Few actors this side of Ronnie Barker get to star in two memorable sitcoms. Those of a certain vintage will remember him in Citizen Smith as a one-man Trotskyite revolution on the streets of Seventies Tooting. A quarter of a century later he was the face of My Family, the British version of an American family sitcom.

And then there is the Bard. When the BBC started shooting their sequence of complete Shakespeares in the late 1970s, Lindsay was Benedick and Lysander (and Edmund on Channel 4’s King Lear). In the West End he has played Richard III, the dirtiest rottenest scoundrel of them all.

The common thread is there if you look for it. Lindsay has always been good at playing big and sometimes villainous egos. He has never been the ordinary man in the street. He played Fagin twice – he won a second Olivier when he took over the role in Oliver! in 1997 – and Tony Blair twice. He has played both Henry II and his nemesis Thomas à Becket. For five years he was the iron-spined Captain Pellew in the Hornblower series on ITV. In Martin Sherman’s play Aristo he played Aristotle Onassis, the shipping squillionaire who persuaded Jackie Kennedy to tie the knot. He was the first actor to be offered the charismatic lead role in Jimmy McGovern’s Cracker: his refusal was Robbie Coltrane’s gain.

And so the list goes on. The great television dramatist Alan Bleasdale spotted in the self-aggrandising Wolfie Smith an actor capable of teetering compellingly on the brink of insanity. It led to Lindsay’s two greatest performances on television, as a panicking loony left council leader in GBH and a criminally feckless father in Jake’s Progress. Both were dramas about the little boys crouching inside grown men.

That ability to tap into lost innocence goes back to Lindsay’s own childhood. He has a deep-seated memory of receiving a sound thrashing at the age of nine from his pregnant mother after he swapped a toy with a friend. It’s Lindsay hunch that, as the new sibling came along, this was when the approval-seeking actor in him was born. Deep into his sixties he still has the open, unquestioning, almost childlike face – and the trim boyish figure – that has enabled his characters to get away with all sorts: mayhem and, now and then, murder.

Lindsay donned another layer of armour when migrating from Derbyshire to London to train as an actor in the late 1960s. This was when actors still toured rep theatre spouting RP. At RADA he was advised to kick over the traces of his roots on the grounds that DH Lawrence didn’t write many plays. He reinvented himself as a cockney. In Citizen Smith and Me and My Girl, the new suit served him well. In the latter role he was seen by Laurence Olivier himself, who came backstage and planted the idea that Lindsay should play the role of Archie Rice. It took more than 20 years for the blessing to bear fruit.

By then Lindsay had allowed himself to retreat from theatre and become boxed in by television. He was a splendid Fagin, this time without Lionel Bart’s songs, in Bleasdale’s adaptation of Oliver Twist, played the PM in A Very Social Secretary and The Trial of Tony Blair. Meanwhile the critic-proof My Family paid the bills for eleven interminable years.

But every time Lindsay acts in front of an audience, it is as if he is coming up for air. And so it has proved again in Dirty Rotten Scoundrels. It’s where he can send his performance towards the back wall rather than rein himself in for the camera. What the audience sees as he sashays down the stairs singing “Give Them What They Want” is exactly that: a performer still at the top of his game, still giving them what they want.

FOR MORE DETAILS AND HOW TO BOOK CLICK HERE←