They are often the first optimistic signs to emerge from the winter gloom – spring is finally on its way (hurrah!) – and snowdrops are being celebrated nationwide, with festivals, guided walks and trails galore.

Here are just a few of the gardens where you can admire dazzling drifts of these pint-sized beauties from now until the end of March.

For the first time ever, York Gate Garden, near Leeds, will open for a snowdrop week, from February 20-23. This charming one-acre space, owned and run by the charity Perennial, features many different varieties of snowdrops, including Galanthus ‘S. Arnott’.

Created by the Spencer family during the 20th Century, the garden is designed around a series of 14 outdoor rooms, each with its own unique character, laid out on a framework of yew and beech hedges and York stone and granite paths.

Chase away the winter blues with a bracing walk through the grounds at Chirk Castle. Glimpses of snowdrops can be found throughout the garden, scattered between clipped yews, shrub and rock gardens, as well as drifting along the woodland floor. Take a moment in the Pleasure Ground Wood to enjoy more stunning snowdrop displays, then warm up around the fire in the Woodsman’s Hut.

Join in the Scottish Snowdrop Festival from the end of January through to March, where many of the public gardens and woodlands of Scotland are awash with swathes of snowdrops, including Castle Kennedy Gardens in Stranraer (castlekennedygardens.com) and the Cambo Estate in Fife (camboestate.com). Edinburgh’s Royal Botanic Garden has a fabulous collection of specialist snowdrops and is holding ‘snowdrop walks’ each Friday, Saturday and Sunday from February 16-March 11.

Take a crisp winter walk through Ickworth to discover carpets of snowdrops along Lady Geraldine’s walk, as well as the Albana walk and Trim trail. The delicate white flowers are perfectly complemented by the golden glow of aconites scattered throughout.

Enjoy an end-of-winter walk with the family amid carpets of white flowers on an enchanting mile-long route, taking in the diverse landscape and more than 70 varieties of snowdrops. Rode’s stunning display is a labour of love. The snowdrops have multiplied over six generations of the Wilbraham family; they were first planted by Sibella Wilbraham in 1833, who came from a family of gifted gardeners.

This World Heritage Site is a paradise for nature lovers. The picturesque abbey ruins look beautiful at the beginning of the year, set alongside carpets of snowdrops. It dates back to the 19th Century, when Earl de Grey planted snowdrops to spell out his name along the banks of the River Skell. The snowdrops tend to appear in the last week of January but are generally in full bloom by the second week of February.

This Elizabethan stately home and award-winning garden is holding a Snowdrop Spectacular from February 10-March 4. Every February, millions of hardy snowdrops push through the cold winter ground to create a magnificent ‘white carpet’ across the woodland floor. Galanthophiles may also like to buy some Burton Agnes-propagated snowdrops ‘in the green’, which is the best way of building a collection.

The seven-acre winter garden at Dunham Massey is the largest of its kind in the UK. Since opening back in 2009, more than 200,000 double and single snowdrops have been planted, which now create a shimmering white carpet from late December to February.

Keep an eye out for other early-spring flowers while you’re there, including striking blue winter irises and bright daffodils. The garden contains almost 700 different plant species, including 20,000 narcissi that will also be in bloom in early spring.

The country’s sole surviving complete Rococo garden was designed in the 1740s, as a fanciful pleasure garden for Benjamin Hyett and his guests.

More than five million snowdrops will emerge and, although no one knows how they arrived at the garden, they are among Gloucestershire’s must-see events. There are 15 varieties at Painswick, the most famous being Galanthus ‘Atkinsii’, a particularly tall type, discovered at the garden in the 1800s.

The main collection of snowdrops is in the Snowdrop Grove, with more modern varieties above the maze. An art exhibition featuring paintings of snowdrops will run at the house through February.

Explore the grounds of this 17th Century family home, where blooms of snowdrops herald the beginning of spring. Over the past 15 years, Springhill’s head gardener, John Boyle, and countless volunteers have worked hard to distribute these dainty white flowers around the grounds from a hidden corner of the woodland. Snowdrop walks will be taking place on selected dates throughout February, while visitors can keep the kids entertained on the Natural Play Trail. 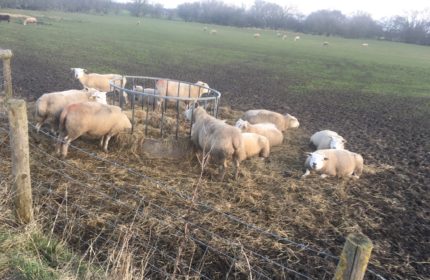