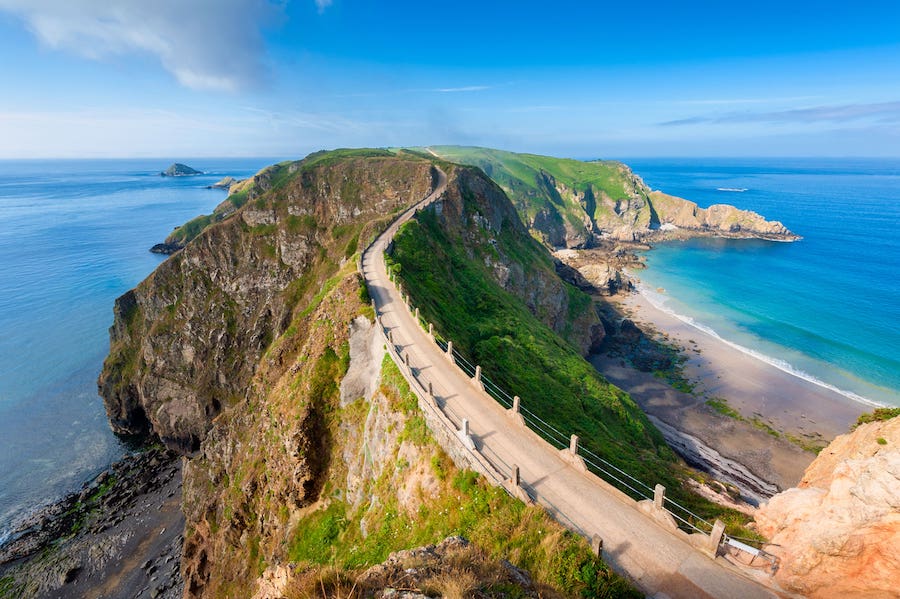 There’s something about crossing the sea that makes a holiday feel proper. Staycations are all the rage right now for obvious reasons, but cars and trains lack the intrepid glamour of boats and planes, and when you visit an island it feels like you’ve entered a new and exciting ecosystem.

Island hopping begins at home. Here are some awesome islets that can help save your holiday, on both sides of the Irish Sea…

The Isle of Skye is a serial list-topper for natural beauty, but it’s so well-trodden and overtouristed that instead we’re opting for its smaller, Inner Hebridean neighbour Mull. Something of a Mecca for ramblers, the island boasts some of the most varied scenery in Scotland, from dazzling snow-white beaches to jagged, blackened basalt crags.

With eagles in the air, whales in the sea, and four crumbling castles dotted round the coast, Mull has plenty to attract tourists even outside its brightly-coloured capital, Tobermory, and the easy day trips to Staffa and Iona.

Whales, dolphins, sharks and even turtles congregate just off the island’s shores, eminently spottable by boat, while the endless tracts of heather and gorse look strikingly similar to the Scottish highlands. An official Gaeltacht area, at least half the island’s 120 permanent inhabitants conduct their daily business in Irish, and most of the rest are bilingual.

The birthplace of literal pirate queen and legendary folk hero Grace O’Malley, whose grave still stands at the local abbey, Clare Island is a rugged, mountainous retreat, all cliffs, coves and crags.

Culture vultures will be well-served with a medieval castle, Napoleonic tower, and megalithic tomb, while the 160-strong population supports two pubs and a cosy clifftop lighthouse-turned-B&B. Popular with hikers, the island’s brutal beauty is best admired from the peak of hill-cum-mountain Knockmore, at the end of a long, exhausting walk.

The UK’s answer to the Galapagos, Lundy belies the UK’s rubbish reputation for wildlife by packing a wide range of species onto an island only three miles long. Puffins, seals and sika deer take pride of place among the fauna, while dolphins and porpoises often swim alongside the ferries.

Despite the steady trickle of day trippers the island still feels blissfully remote, perhaps because its 27 permanent residents get by with almost non-existent phone signal. It’s actually been occupied since the stone age, and inland treasures include a 13th century castle, a Georgian villa, and a lighthouse.

Some islands are sandy and sun-soaked, others wild and remote, but St Michael’s Mount earns its spurs with pure, unsullied beauty. A conical islet wreathed in forest and topped with a medieval monastery, it’s famously photogenic thanks to the stunning reflections it casts on the sea below.

Twinned with Mont-Saint Michel in France – historically, architecturally, and in name – whether it’s an island depends on when you’re reading this, as a granite walkway joining mount to mainland emerges from the sea at low tide.

Among the best known of all the archipelagos to skirt the Irish coast, the three Aran Islands rise from the waters of Galway Bay, the inspiration for countless postcards. Famous for their limestone landscape, cross-cut with seemingly endless stone walls, prior to the pandemic the islands sometimes welcomed thousands of tourists a day.

A beautiful, if frankly bizarre little island reached via a ferry from neighbouring Guernsey, the steep-sided Sark remains one of only a handful of places in the world to have totally banned cars, and the unpaved, unlit lanes are traversed instead by bike or horse and cart. The lack of pollution lends the island unparalleled stargazing, and Sark was declared a Dark Sky Reserve.

A crown dependency, the island held its first general election in 2008, and before then was technically Europe’s last remaining feudal state, ruled by a hereditary succession of seigneurs.

janetdonaldson1
18th Sep 2020
1
Thanks for voting!
I thought the Isle of Skye would be one of the 7 top however I live here and find that it is getting too many tourists that it is a bit spoiled but it is so beautiful in the spring and autumn when the roads are getting less busy. It is an ideal place for walking, cycling birdwatching and dolphins, whales etc. It has been so quiet this year until now and very few cases of Covid 19. If you've never been, its well worth a visit. I,ve been here almost all my life and wouldn't like to move anywhere else I love Skye.
ReplyFlag as inappropriate