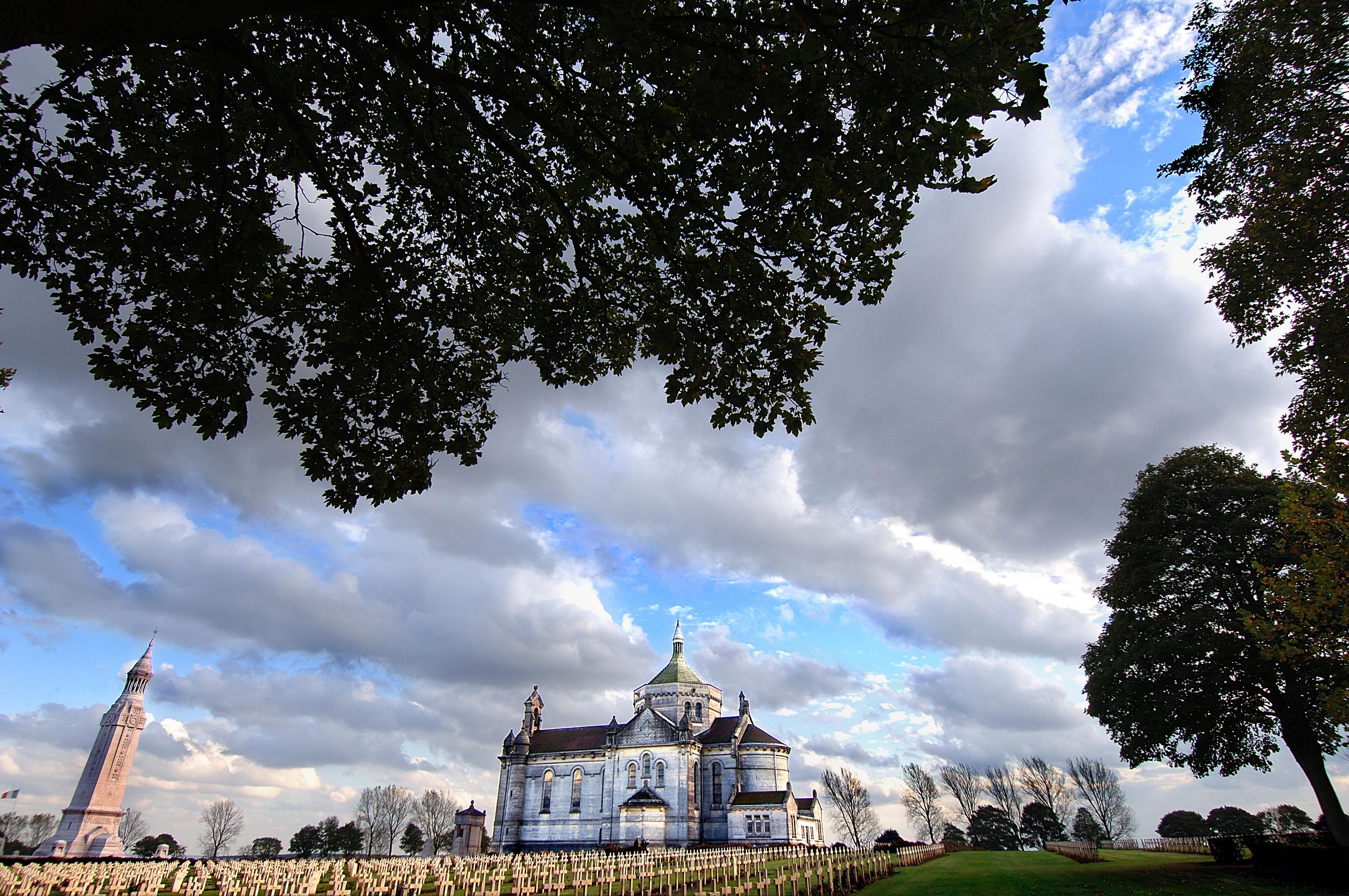 On the battlefields of Belgium and France

On a tour of the First World War battlefields, cemeteries and museums of Belgium and northern France, Anthony Looch finds it impossible not to shed a tear for the men who never came back.

It is now nearly 100 years since young Hugh Cameron Smith patriotically told the lie which ended his life in his teens, and yet when you hear his story in the great Cloth Hall of Ypres it is still deeply moving.

In the Flanders Fields Museum, opened in the splendidly rebuilt hall six years ago, you enter Hugh’s life in 1915 when he was a 17-year old lithographer in Paisley and volunteering for the British Army.

He was below the legal age for the forces, so his father blocked his first attempt to enlist. Undaunted, he headed for Liverpool, lied about his age and went out to the Western Front on March 1, 1916.

Later that year he was killed in action. His remains were never found, although the search for him, and others missing like him, still goes on.

Although I grew up familiar with stories of the terrible battles of the Great War of 1914-8, the grim reality of the terror and the bloodshed of these terrible days only really hit home for me on our three-day tour of some of the principal battlefield sites, graveyards and museums of Belgium and France.

Now that Prime Minister David Cameron has ordered a major event of remembrance to mark the centenary of 1914, many more are likely to follow my path of discovery.

Via Eurostar, you can be whisked in an hour or two to the scenes of those horrors of almost a century ago, to the road signs to places such as Armentieres and Picardy, immortalised in song by soldiers, and to see the legendary poppies of Flanders Fields.

Much of what I saw brought tears to my eyes. No amount of reading, or TV programmes and films about the First World War, will prepare you for this.

The causes of “the war to end war” were complex, and it was widely expected, at the start, to end by Christmas 1914. Adventurous young men reared in the derring-do culture of Victorian and Edwardian times were so keen to fight that conscription only began in early 1916.

My tour came through a project called The Great War Remembered, supported by the Interreg IV programme, involving France and the territories of Wallonia and Flanders, now part of Belgium to the north.

The aim is to share an awareness campaign which unites the large border-crossing area from the North Sea in Belgium to the Chemin Des Dames down in France. Museums have been, or are being, upgraded and extended.

Our first stop was Lijssenthoek military cemetery, outside Ypres, containing nearly 11,000 graves, row upon row of them in neat, perfectly tended grounds.

It’s the largest of the hospital cemeteries which grew up around the casualty clearing stations to the east and west of Poperinge. British soldiers and victims from France, Germany, America, New Zealand, China, South Africa, Ukraine, Norway and Italy are buried here.

Our next call was the Memorial Museum Passchendaele 1917 at nearby Zonnebeke. The museum is in an old chateau which contains an amazing collection of historical artefacts, photographs and maps.

Here, the “dugout experience” brings home the claustrophobic conditions of life at the front line.

On we travelled, to the lovely old town of Ypres (“Wipers” to the British Tommies) which was reduced to a lunar landscape by German artillery. Its centre was restored with amazing accuracy when the guns finally fell silent.

The beautiful and ancient Cloth Hall – also totally rebuilt – contains the stunning, upgraded Flanders Fields Museum, which tells the story of the war in the West Flemish front region.

An exhibition of “then and now” aerial photographs shows how the landscape was slowly recovered after 1918. Extremely effective audio-visual material and hundreds of authentic objects explain the scale of the slaughter.

Most disturbing of all are the photographs of men whose faces were grotesquely mutilated, some so terribly that they lived permanently in institutions when they got back.

Others, allowed to return to their families and the community, were given false noses or full-face masks which they had to wear permanently.

Each night in Ypres, the Last Post is still sounded, followed by Reveille, by trumpeters at the Menin Gate, through which so many British and Commonwealth troops passed to the front line.

My next stop was the huge Notre Dame de Lorette National French Cemetery, just off the Arras-Bethune road.

This cemetery has a tall basilica and an ossuary. Of the almost 40,000 French soldiers buried here, about 20,000 are unidentified, and the ossuary also preserves the ashes of French citizens who died in Nazi concentration camps.

Near Lille and Arras, I visited the old Fort de Seclin, which contains an impressive collection of British, German and French artillery, and other weapons, and a museum with rooms for different themes, showing the conditions of life and combat.

The fort was one of a network of 400 built after France’s defeat in the Franco-Prussian War of 1870-71. It has never seen action, but the Germans executed Resistance fighters there during the Second World War.

In the town of Albert, I found the Somme 1916 Museum, buried underground in a deep former wartime shelter and housing a wonderful collection of original uniforms and equipment and glass alcoves contain scenes from trench life, with life-size models.

The town of Peronne has one of the most amazing museums I saw on my trip – the Museum of the Great War. It clearly explains the war’s origins and shows how propaganda and industrialisation played their part during the conflict.

It runs 56 newsreels from the war period and contains collections of pictures, posters and objects from daily life, to give understanding of the war, both at the front and behind the lines.

My final call was to the sinister-sounding Caverne du Dragon, which houses the Museum of the Chemin des Dames. Here both Germans and French commandeered and occupied deep underground stone mines (sometimes at the same time, but far apart) which had been quarried for stone in the 18th century.

The labyrinthine quarries, which cover a wide area, are lit with lanterns and one could easily imagine ghostly presences wandering through their dark, damp corridors.

Throughout my trip, I passed the sites of battlefields and visited some. The miles of peaceful green countryside, with clusters of trees, could have been anywhere in England, and it required a stretch of imagination to visualise what these areas would have looked like while they were being torn apart in a major war.

As you travel between the landmarks, museums and silent, well-tended cemeteries, visited annually by many thousands of people, including and especially the very young, it is fascinating to see how the killing fields of Northern France have finally found tranquillity and calm.

Goodness knows if peace has been underpinned by the European Union – or by other more benign influences. My journey left me with overwhelming sympathy for the brave and patriotic men who died so cruelly and prematurely, and for loved ones left behind to grieve for years.

But I was also reminded of something positive. Although the human race tears itself apart at times, it is amazing how it always picks itself up afterwards, dusts itself off and gets back to normality.

:: BEST FOR: Understanding more about a cataclysmic world event of the 20th century.
:: TIME TO GO: April-October, to explore the outdoor memorials.
:: DON’T MISS: The beautifully rebuilt town of Ypres.
:: NEED TO KNOW: A basic knowledge of the Great War comes in useful.
:: DON’T FORGET: A good pair of waterproof shoes.

TRAVEL FACTS
Anthony Looch was a guest of Visit Flanders. He stayed at the Novotel Ypres, where tour operator Great Escapes offers three nights’ B&B from £104pp (car and four passengers) and from £123 (car plus two) until Mar 31.
Prices include a free 3rd night with breakfast (available for Fri-Tues arrivals all year), return P&O ferry Dover-Calais crossings and entrance to the In Flanders Fields museum (www.inflandersfields.be/en)
Great Escapes: call 0845 330 2089 or visit www.greatescapes.co.uk

For more information about the destination see www.visitflanders.co.uk

Diary 14-18, a smartphone app, takes visitors to five unique WWI sites in France and Belgium including the Battles for the Artois at Mont St Eloi (Pas de Calais); Mateship and Cobbers Fromelles (Nord); From World’s End to Beaumont Hamel (Somme); Between Heaven and Earth on the Chemin des Dames (Aisne), and Death as an Everyday Occurrence at Lijssenthoek (Western Flanders).