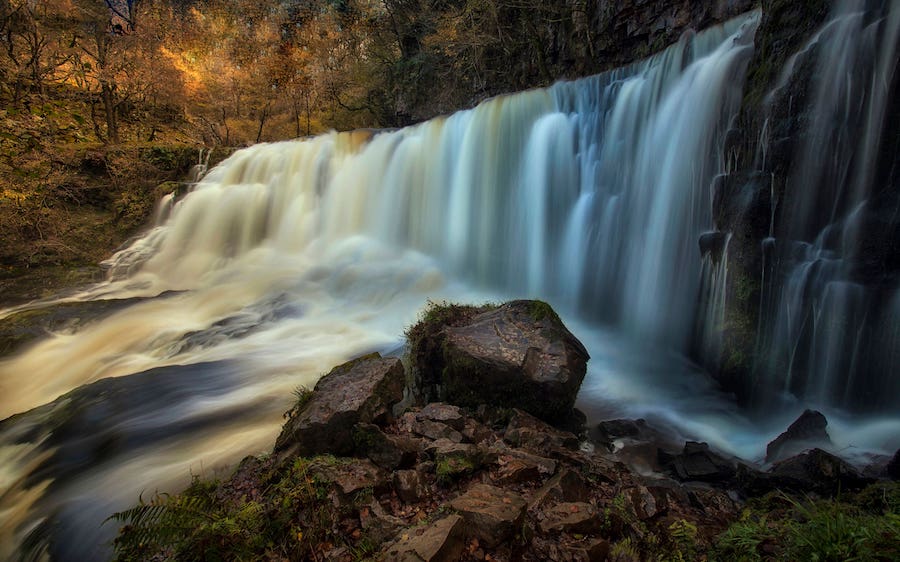 There’s something strangely compelling about watching an awesome weight of water hurtle headlong over a cliff, and plummet however-many-metres down to Earth.

These are the most memorable waterfalls in the UK and Ireland – from a poetic plunge in County Leitrim, to an icy torrent in the Snowdonia National Park…

A 55-metre plunge over sheer sea cliffs, tumbling into the Sound of Raasay, Mealt Falls is one of many reasons the Isle of Skye has topped a fair few lists in its time. The cliff drops away so sharply that the water spills straight into the ocean – a rare thing for waterfalls anywhere in the world. Most spectators content themselves with a neck-craning side view, but canny tourists will book a boat to view the falls from below.

Ensconced in a forest grotto that wouldn’t look out of place in the jungles of Costa Rica, the ethereal Glencar Waterfall is more about beauty and mystery than heft. The falls famously inspired Irish literary icon WB Yeats to write: “Where the wandering water gushes, from the hills above Glencar, in pools among the rushes, that scarce could breathe a star.”

A phased cascade separated into five distinct stages, Sgwd Isaf Clun-Gwyn is the jewel in the crown of the “four waterfalls walk” that weaves through the Brecon Beacons National Park. The highest fall is by far the most impressive – a solid wall of water that splinters into a succession of smaller falls below.

The highest waterfall in Ireland, Powerscourt twists and turns its way down 121 metres of jagged valley-side, as alluring for students of glacial geology as for visitors seeking a wonder of the natural world. It has starred on screen on numerous occasions, including 2013’s TV hit Vikings and 1981 John Boorman flick Excalibur.

A bottleneck waterfall that thunders into its plunge pool in a blur of frothing white water, High Force, as its name suggests, is all about power. From a trickle in the North Pennines, the River Tees grows into a fully-fledged torrent before surging over a river cliff near Forest-in-Teesdale, and thudding home 21 metres below. The walk to the waterfall, through the woods of the Durham Dales, is as tranquil as its destination is turbulent.

Surrounded by Bronze Age settlements, there’s something delightfully primal about Aber Falls, as it plummets down a steep-sided rock face battered smooth by the waterfall’s force. In the foothills of the Carneddau Mountains in the Snowdonia National Park, the falls turn torrential after a storm, but freeze sufficiently in winter to allow scaling them with ice axes.

Which ones have you visited?