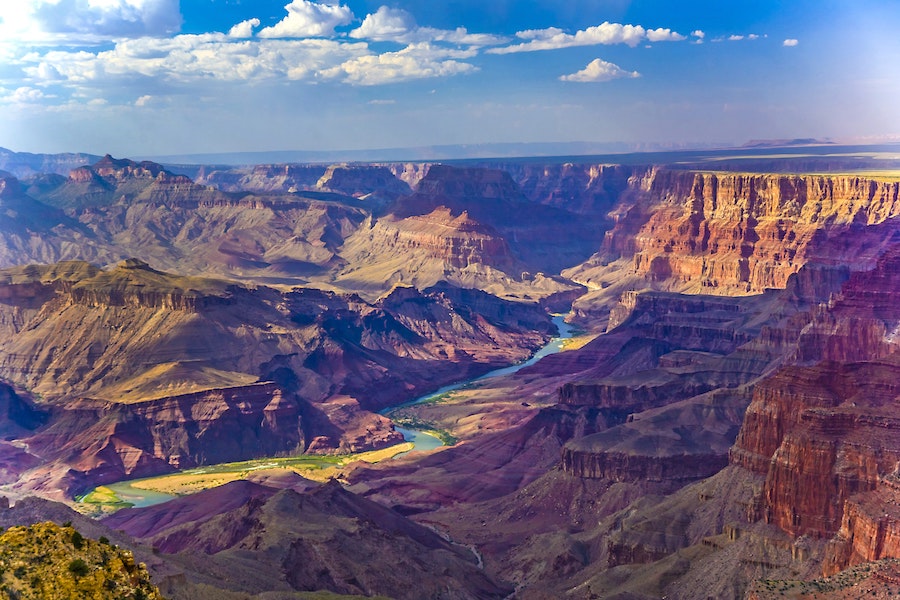 First of all – confession – the Grand Canyon is not actually 100 years old. Its cliffs and crags were forged by water erosion over the course of millions of years in fact, and it’s existed almost unchanged since the dawn of human history.

It is for this reason that recording the histories of giant Proterozoic rock formations is often not a rewarding enterprise, but for the Grand Canyon we’ll make an exception.

It’s 100 years since it was made a national park in 1919, in the first wave designated by Theodore Roosevelt and Woodrow Wilson, and the canyon has carved a unique niche in the consciousness of modern America and, to a lesser extent, the world.

Consider the words of Ron Swanson – the gruff, hyper-masculine patriarch of hit NBC show Parks And Recreation. “Crying,” he says, “[is only] acceptable at funerals, and the Grand Canyon.”

Larger than Rhode Island, and high enough to affect the weather, the Grand Canyon is one of nature’s rock stars. Here, very briefly, is how it came to be…

A very big hole in the ground
We’ll try and skip through this bit quickly, which shouldn’t be difficult – though we know the canyon was carved by the Colorado River, different dating techniques suggest this started anywhere from five million to 70 million years ago.

As the current drove deeper into the valley it exposed different strata of sedimentary rock – mostly limestone, sandstone and shale – leading to the canyon’s heavily layered look. The oldest rock at the bottom formed around 1.8 billion years ago, while the newest clocks in with a sprightly 250 million.

With so many exposed layers, the Grand Canyon is a geologist’s dream, showcasing more than a billion years of formation. It also contains one of the clearest examples of ‘the Great Unconformity’ – a geological phenomenon in which the youngest rocks lie back-to-back with rocks from 1.2 billion years ago. Where the intervening 950 million years went, no one knows.

The Colorado River is as forceful as ever, and the eroding and weathering is ongoing. Check back in a few million years to find out more.

Human habitation
Evidence of human activity dates from a much more approachable 12,000 years ago (near the end of the last ice age), but these were likely nomads passing through in search of game.

Various indigenous groups have called the canyon home down the millennia – most notably the basket people and the ancestral Puebloans – and Native Americans settled there around the 13th century AD.

America was ‘discovered’ in 1492, but landing in Virginia was a far cry from the Arizona wilderness, and it wasn’t until 1540 that conquistador García López de Cárdenas became the first Westerner to set eyes on the majestic ravine.

Two centuries passed before American explorers picked up the mantle. When an adventurer named Joseph Christmas Ives wrecked his steamboat in the river in 1857, he famously called the canyon a “valueless… profitless locality”. With him was John Newberry, a geologist thought to be the first to study the canyon’s walls.

In an unfortunately familiar narrative, the US military followed with guns, germs and steel. The Havasupai were deprived of their lands; the Hualapai were decimated in a three-year war; the Paiute people were depopulated by disease and forced assimilation; and the Navajo were rounded up and forced to trek 9,000 miles to internment camps at Fort Sumner. Enduring populations of all four tribes now live on reservations.

In 1901, the completion of the Santa Fe railway turned a $20, 12-hour stagecoach ride to Diamond Creek into a $3.95, three-hour train journey from Williams. Unsurprisingly, tourism increased.

Today’s canyon is not well-equipped for modern living, but contrary to popular belief, it does contain one settlement. Supai Village, in the Havasupai Reservation, is inaccessible by road, has a population of only 208, and is the only place in the United States that still receives mail by pack mule.

The canyon has a fearsome reputation and has claimed around 700 lives since 1919, from white-water rafting accidents to helicopter crashes, rock falls and suicides. There’s still roughly 250 search-and-rescue incidents a year.

A presidential champion
If Americans have one man to thank for the canyon’s enduring status, it is two-term President and all-round macho man Theodore ‘Teddy’ Roosevelt.

Nicknamed the ‘Bull Moose’ – he was famously shot in the chest before an address and insisted on giving his speech in full before treatment – Roosevelt was, to say the least, outdoorsy. An accomplished Badlands hunter, his obsessive exercise bordered on masochism, and his weekly boxing matches left him virtually blind in his left eye.

In one oft-quoted passage, he condemned the “emasculated, milk-and-water moralities admired by pseudo-philanthropists”, instead eulogising the “stern, manly qualities that are invaluable to a nation”. He hated being called Teddy.

It is no surprise that the canyon’s brutal beauty so beguiled this man of nature. On his first visit he declared it “beyond comparison; beyond description; absolutely unparalleled throughout the wide world”, and in 1908 he used a legal loophole to bypass Congress and declare the site a National Monument.

It was his successor, Woodrow Wilson, that officially made the canyon a National Park, but it was Roosevelt who’d fought and won the battle.

An American icon
Over the last century, the canyon’s fame has steadily grown. Last year, it fielded 6.38 million tourists both domestic and international, and development has skyrocketed since the first hotel opened in 1905.

Recent additions include the Grand Canyon Skywalk – an unsupported, horseshoe-shaped, glass-bottomed bridge that extends 70ft out over the cliffs. The drop beneath is almost a mile, but staff assure nervous visitors that the bridge could take the weight of 70 fully-loaded passenger jets.

Many Americans call the canyon one of the seven natural wonders of the world, but they might be shocked to learn that it is not the world’s largest by some way. That honour goes to the Yarlung Tsangpo Grand Canyon in Tibet – 17,567ft to its namesake’s 6,093ft – which is also around 30 miles longer.

Ah well. Give it another 70 million years.