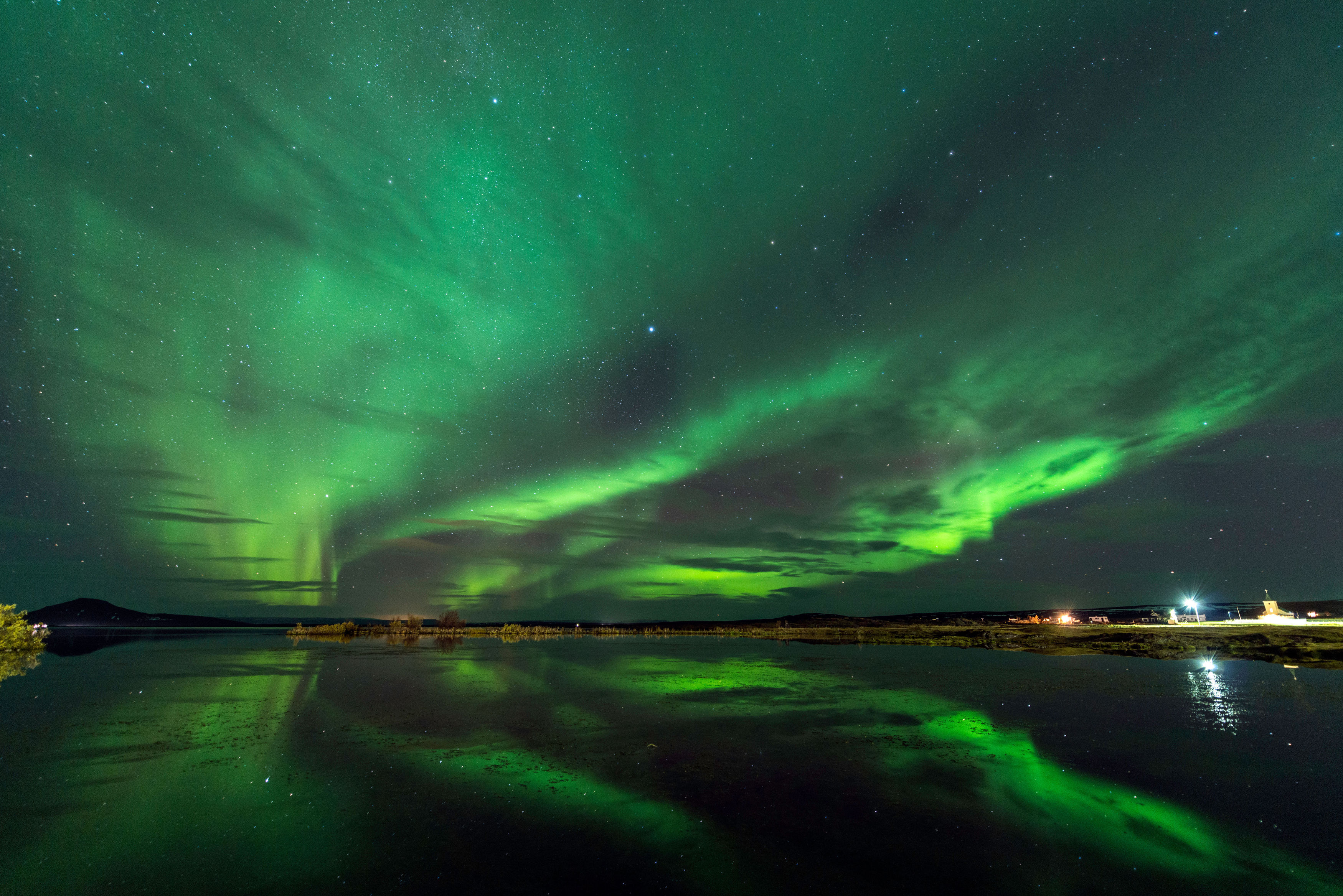 Getting to the core of Iceland

Wild nature baths, tales of trolls and some of the best opportunities to see the Northern Lights entice Sarah Marshall to the remote and less visited region of northern Iceland

Now darkness has engulfed the gnarly volcanic landscape, it’s hard to determine where land ends and the sky begins.

Balls of mist roll like tumbleweed around crater rims, whipped up by howling winds charging at 15 meters per second. Struggling to hold my balance, I almost have to crawl on my hands and knees. The fact I’m dressed only in a bikini doesn’t really help matters.

It might sound like insanity, but I’ve come to this remote, sparsely-populated region of northern Iceland to go swimming.

A natural lagoon with 40 degree water heated by geothermal energy, the Myvatn Nature Baths opened to the public in 2004.

Less commercial than the Blue Lagoon in the south of the island – now replete with floating bars, spa robes and mud-pack dispensers – this mineral-rich hot spring offers a much simpler and wilder alternative.

In fact, it’s one of many bathing spots in this extension of the Mid-Atlantic ridge – some in caves, others in chasms, and some so hot you could boil an egg in them.

Reached by a short flight from Reykjavik to Iceland’s second city Akureyri, this wild and rugged region is attracting an increasing number of tourists, lured by other-planetary scenery, geological phenomena and the promise of being one of the best places in Iceland the see the Northern Lights.

Situated in a valley at the end of Iceland’s longest fjord, the 70km Eyjafjorour, Akureyri has been inhabited since the first settlers came to Iceland. Yet the 18,000-resident town, famous for being one of the few places in Iceland with plentiful vegetation, only officially celebrated its 150th anniversary in 2012.

“This is a town of trees,” says my guide Siggi, whose family have lived in this area since the 17th century. “There are trees in every backyard.”

As we drive into the mountains, past thundering waterfalls and 10,000-year-old steppes carved out by glaciers during the Ice Age, it becomes clear space is not in short supply here. 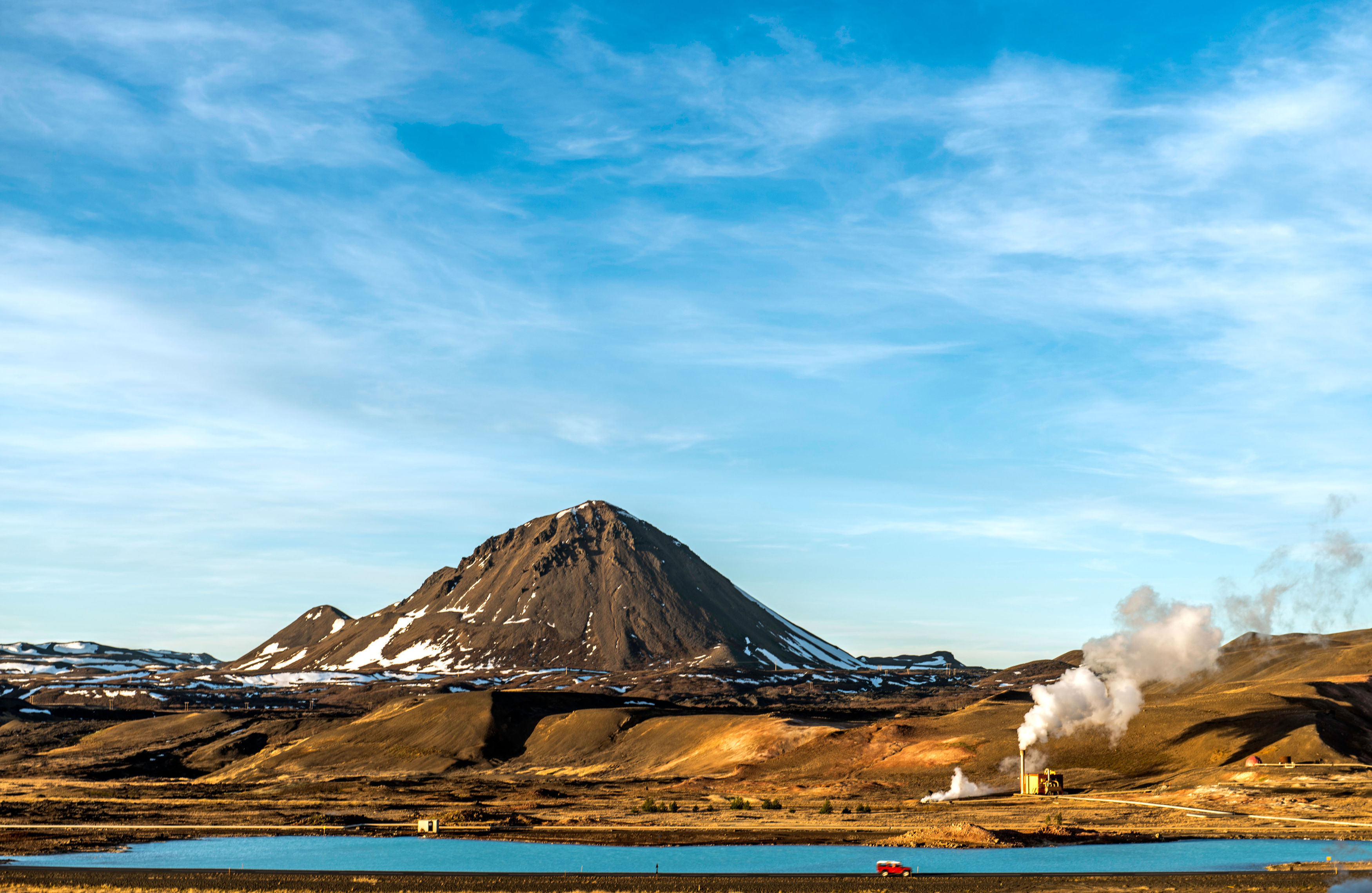 “Some people even own volcanoes,” says Siggi, a former farmer with a wry sense of humour, who speaks in gruff Norse tones through a beard of wiry ginger hair. Dressed in a knitted Nordic jumper, he’s the exemplary Icelander. “My family have two mountains,” he adds.

Siggi takes me to his family farm, and proudly points out a 100-year-old barn thatched with turf, which is now protected by the Museum of Iceland.

There are no locks on the doors – with virtually no crime, there’s no need – and Siggi always leaves his car keys in the ignition, just in case his neighbour needs to borrow the vehicle.

Agriculture was once the main industry in this area, but in the last 1,100 years, 50% of vegetation and 96% of tree cover has been lost, and soil erosion is a serious problem. “Farming is now just a hobby,” laments Siggi.

Most locals have since turned to tourism to make money. One restaurant, Vogafjos, has even cleverly combined the two; diners can eat in the company of dairy cows, milked behind a glass wall to make cheeses and yogurts served on the menu.

People also have plenty of other natural resources to draw upon – originating from far deeper underground.

“Geothermal water is our oil,” Siggi tells me as we drive towards the 1,000m diameter ash crater Hverfell, the largest in Iceland.

More than 90% of houses are heated purely by geothermal water; power stations have successfully harnessed the energy – and even the local sweet rye bread is cooked by lowering a bucket filled with dough into the ground and leaving it for 24 hours.

As we approach the active Krafla caldera, which last erupted in 1984, wisps of smoke rise from bore holes in the surrounding lava fields. Overhead, lenticular clouds start to form, whipped up like spoonfuls of Angel Delight.

The smell may be unpleasant but it would be worse if you could smell nothing, Siggi tells me, with a macabre smile. “In concentrated forms, dihydrogen sulphide is as poisonous as cyanide, and one of the first things it kills off is your olfactory nerves.”

The hot clouds of steam rising from the ground actually provide welcome relief as temperatures drop, even though I tease Siggi that his knitted Nordic jumper will now smell of rotten eggs.

By now, the sun has almost set, leaving a band of pink and purple hugging the sky. We’re witnessing the Belt of Venus, a common phenomenon at higher latitudes during winter, when the sun hangs low in the sky and the air is filled with ice crystals.

But our adventures don’t end with nightfall.

Even on nights of low activity, it’s possible to see the Northern Lights rippling across the sky, and no matter how cloudy it might be, there’s always a patch of clear sky above Lake Myvatn, the vast expanse of water that’s a wildlife haven for birds – and 3-5,000 tonnes of midges during summer.

We drive to Dimmuborgir, a ridge of craggy lava formations, where shapes and shadows fuel imagination, and irregular pillars are said to be trolls turned to stone by the sun. These mischievous creatures populate Icelandic folklore, often eating people, boiling them in pots or – worse still – using them for sexual pleasure.

The real baddies seem to be gargantuan females with voracious libidos, making me wonder if most of the stories were in fact made up by men.

Lying on the ground and looking up at the stars, I watch the trolls wave electric green banners across the sky as if to greet us. As the Aurora grows stronger, streaks ripple like a Mexican wave, shape-shifting with increasing speed.

I stay up until 3am chasing the lights, long after the full moon has rolled below the horizon, yet the best display is behind my hotel, overlooking Lake Myvatn, where reflections arch and spiral across the water.

But north Iceland’s best sights are not just overhead – there’s also plenty to explore below the earth’s surface.

Lefthellir lava cave was formed by an explosion of blazing hot lava 3-4,000 years ago, but now temperatures have dropped it’s filled with impressive ice sculptures – jagged monoliths rising from the cave floor.

First spotted by a farmer in 1982, the cave is well camouflaged by spools of rope lava which wind tightly around the landscape, and getting inside isn’t easy: the narrow entrance is a hole just 50cm high and 1m wide.

I wriggle like a worm to squeeze through, losing buttons from my jacket in the process.

“We once had a woman whose chest was so big she got stuck,” laughs our cave guide Oli. “We had to undo her bra strap so she could get through.”

But the sweat, tears and lost garments are worth it.

We spend two hours exploring the different levels, using ropes to slide down frozen ridges and playing music by chiming blocks of ice.

Before leaving, Oli instructs us to switch off our headlamps.

I wait for my eyes to grow accustomed to the darkness but they never do. Only the dripping sound of melting ice water grows louder. I really am in the hands of nature.

Deep below the earth’s surface, in remote north Iceland, I’m playing out my wildest dreams.