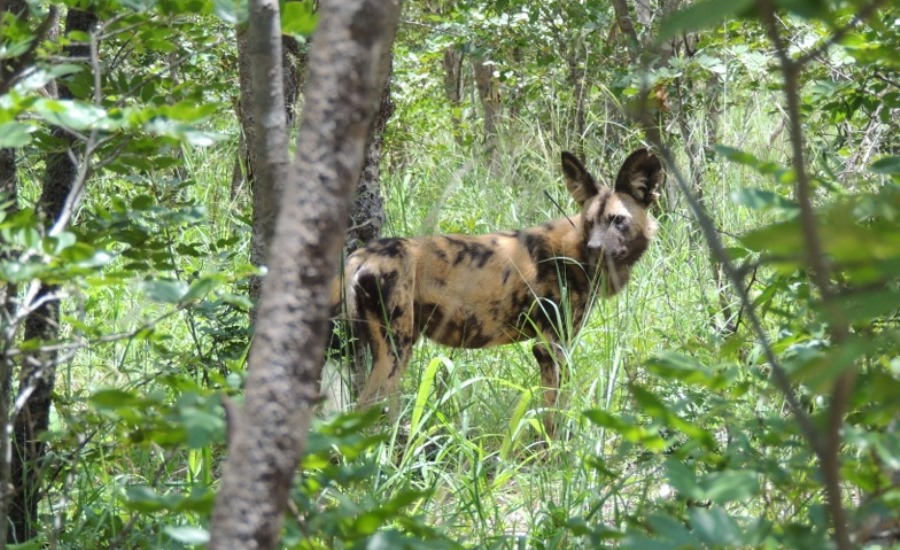 2015 has started extremely well for one lucky painted dog at the DSWF – supported painted dog project in Zimbabwe .

Birmingham, a wild painted dog, had to be captured on Christmas Eve last year because he was struggling to keep up with the pack.  Unable to put pressure on his left leg due to a debilitating bite wound the monitoring team felt he needed treatment at the rehabilitation facility so that he could be released back to the wild in full health.

After a month of caring for this spirited dog, the day came to release Birmingham back to the wild and back to his pack.

Anesthetised just long enough for the team to handle him safely into a transport crate and drive to where the Makwa pack were resting, the crate was opened and Birmingham ran out. He circled around, sniffed the air and hoocalled – the sound the painted dogs make when they are looking for their pack mates.

“Tendai and Argos ran over to him,” explained Peter, Director of the project. “They greeted in typical excited dog fashion with high pitched twittering, the two pups joining in, jumping about all over the place as if they were totally beside themselves with joy.“

Hackett, the other male in the pack, was less impressed to see his pack mate return and there is clearly an issue for them to settle on who is the new alpha male.

As Peter concluded, “There is nothing we can do now they must deal with this themselves. Birmingham is back in the wild where he should be.”