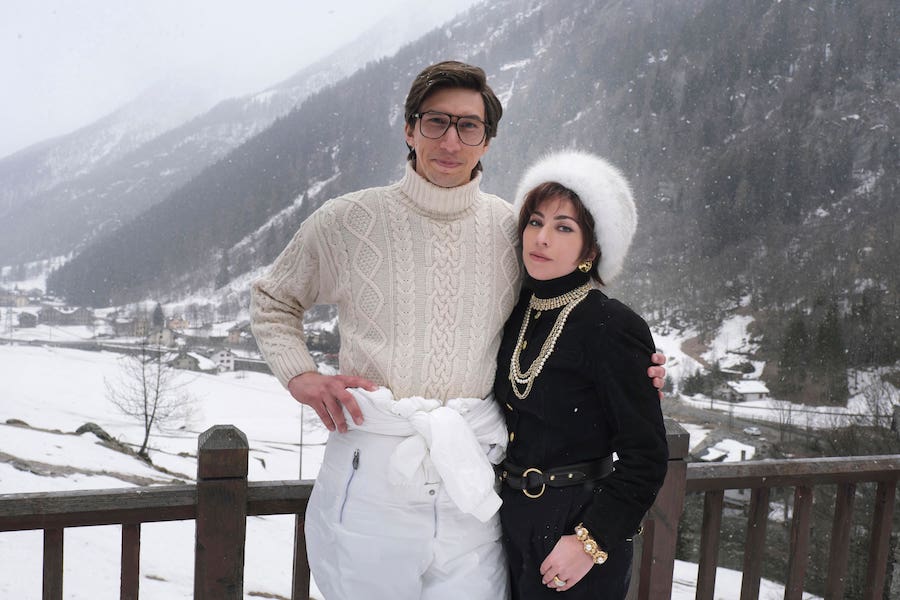 House of Gucci is fast becoming one of the most talked-about films of the year. Georgia Humphreys finds out more from its captivating stars.

Adam Driver is trying to decide on his most memorable moment from his time working with Lady Gaga. The duo are electric together on screen in House of Gucci, in which they play the once-married couple, Maurizio Gucci and Patrizia Reggiani.

“It’s hard to say because there are so many things that we just took in a really weird direction,” muses the Star Wars actor, 38, who hails from San Diego. “We were both so eager to play, and there’s nothing to work on as far as chemistry – it’s just there.

“The more intimate scenes were really fun because we’re pretty comfortable. I feel comfortable in my own skin and she is in hers and there’s more of an anxiety of like, ‘What’s going to happen?’”

The ending of House of Gucci – directed by the prolific Sir Ridley Scott, famous for Alien and Gladiator – is so shocking, it’s hard to believe it’s inspired by real events. The story delves into the history of the family behind the Italian designer fashion brand, Gucci, founded in Florence in 1921 by Guccio Gucci. Written by Becky Johnston and Roberto Bentivegna, the dynastic saga takes us on a journey of scandal and betrayal, starting in the 1970s, which was a big turning point for Gucci.

At the time, the business is being overseen by Guccio’s sons, Aldo (Al Pacino) and Rodolfo (Jeremy Irons), but there’s the question of who will be at the helm next. When Rodolfo’s son Maurizio meets the beautiful Patrizia, he falls in love and marries her against his father’s wishes – and she persuades him to join his family company. Aldo’s son – the hapless, fanciful Paolo (Jared Leto) – is not happy about this. But more drama is to come; with rising competition from rivals such as Armani, Versace, and Lagerfeld, ambitious Patrizia goads her husband into staging a coup.

The couple seizes control of the business, and Maurizio starts to enjoy the power he has. In fact, he ends up turning on Patrizia, leaving their marriage in tatters. Heartbroken and desperate for revenge, she joins forces with psychic, Pina Auriemma (Salma Hayek), but Maurizio has no idea of the danger that lies ahead…

For Driver, the initial draw of the project – which many are predicting to win big at next year’s Academy Awards – was teaming up with Scott again. “We had just worked together on Last Duel, and I loved it,” he enthuses. “So when he reached out to me, I couldn’t wait to get back on set with him.”

Meanwhile, New York native Lady Gaga, who received critical acclaim for her role in A Star Is Born (the film also won an Oscar for Best Original Song for Shallow, which she co-wrote), loved the complexities of her tragic character. “Before they see the film, some people might think Patrizia is a gold digger,” says the 35-year-old. “But when they got married, his family had turned their back on him. So, she didn’t marry for money, she married for love.”

The renowned musician – whose hits include Poker Face, Bad Romance, and Born This Way – notes that Patrizia “wanted so much to be taken seriously by the family”. “She was smart and felt that she knew what to do in order to move the company forward. But their acceptance was only an illusion. They were all just using her to get to Maurizio and firm up their control. She was always an outsider, a woman in a man’s world, and there’s only so much she could do, as many women know. Their power can often go unnoticed.”

As this is based on a true story, there must have been a tonne of research involved for the various parts. What did Driver – who’s also known for Oscar-winning drama Marriage Story – learn about Maurizio in his preparation that’s really stayed with him? “Well, I learned lots of things that are probably boring, about building a character, like what his accent was. He spoke English very well where he was educated in London – how do we say that in the accent? And factual things, about how controlling his father was and was he reluctant to take over the business? What was his relationship to this idea of legacy that’s talked about in the movie?”

The charismatic star continues: “The most surprising is his relationship to the spiritual part of it all, which is not in the movie, but it was in life. At one point he also had a spiritual advisor, and they were casting spells on each other. There’s one story where he walked into a room and felt a presence because Patrizia’s Pina had sent a spell on the house.”

Another brilliant performance in House of Gucci comes from Louisiana-born Jared Leto. The 49-year-old – who is also the lead vocalist for Thirty Seconds to Mars – first rose to prominence for his acting with the US TV series, My So-Called Life. Next came memorable film roles in Fight Club, Requiem for a Dream, and Dallas Buyers Club, for which he received an Academy Award for Best Supporting Actor. And Paolo Gucci took quite the transformation, with the star donning a bald cap and undergoing six hours of heavy prosthetics every morning, leaving him unrecognisable in the film.

“I love that Paolo always had a twinkle in his eye, and a belly full of bread,” reflects Leto. “He was someone who enjoyed life. It was fun to play a character that was always singing and dancing and fighting for his creative survival. He was very passionate and volatile. Every scene that I had was absolutely incredible. A challenging experience, but worth every single second.”

Elaborating further on how he embodied Paolo, he recalls: “I studied Italian, I immersed myself in Italian culture and history and the language, the music of the time. I paid a visit to Paolo’s grave, which was very beautiful, and an emotional experience. I read everything that I could, watched everything that I could, spoke to family and friends, and really just tried to bring an impression of this life to the screen.

“I had a blast doing it. I find Paolo to be a very lovable and fun guy.”

House of Gucci is released in cinemas on Friday, November 26.