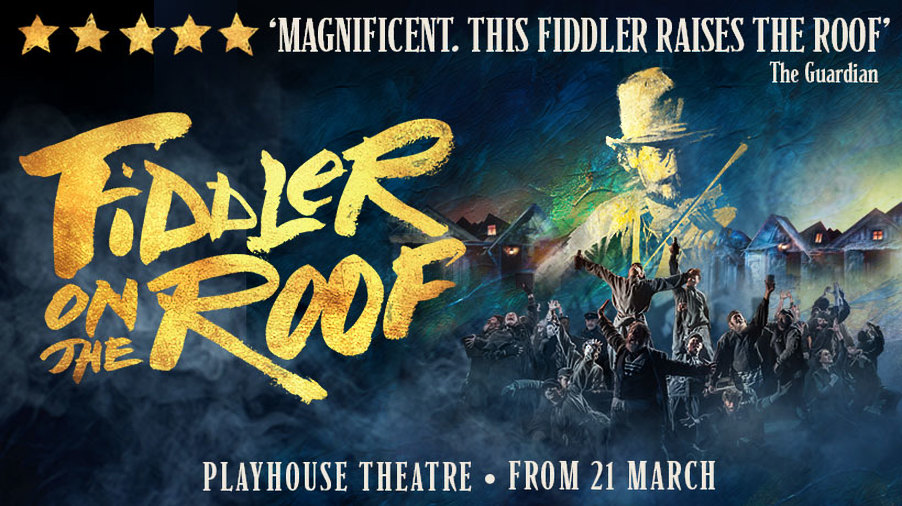 Direct from its sold-out run at the Menier Chocolate Factory, Tony and Olivier award-winning director Trevor Nunn’s ‘exuberant revival’ (The Telegraph) of the classic Broadway musical Fiddler on the Roof transfers to the West End for a strictly limited run.

The Playhouse Theatre will be specially transformed into an immersive space for this ‘shiveringly intimate chamber musical about family’ (The Times).

Set during the Russian Revolution of 1905, Fiddler on the Roof tells the story of a Jewish community in the Russian town of Anatevka. Tevye, Golde and their five daughters are told by a local matchmaker that a local man wants to marry Tzeitel, their eldest daughter. However, Tzeitel already knows who she wants to marry: Motel Kamzoil.

With conflicting desires for marriage, Tzeitel and Motel beg Tevye to let Tzeitel marry who she wishes. Thankfully, the pair are able to marry each other but the celebrations are quickly halted when the brutality of Russian fighting forces sweeps through the congregation.

As more of the daughters look set to marry off, Tevye and Golde reconsider their own marriage and love to each other.

Featuring the iconic score including ‘Tradition’, ‘Matchmaker, Matchmaker’, ‘Sunrise, Sunset’ and ‘If I Were a Rich Man’, and packed with Jerome Robbins’ original Tony award-winning choreography, Fiddler on the Roof ‘bursts from the stage’ (Financial Times), bringing new life to one of the most beloved musicals of all time.

Andy Nyman will play Tevye, who has previously won an Olivier Award for best entertainment in “Something Wicked This Way Comes”. On stage, he has appeared in productions of “Hangmen”, “Assassins” and “Abigail’s Party”.

Judy Kuhn stars alongside Nyman as Golde. Making her Broadway debut in 1985 in a production of ‘The Mystery of Edwin Drood’, she has starred in productions of ‘Sunset Boulevard’ and ‘Chess’. More recently, she played Helen in the Broadway premiere of ‘Fun Home’.

With our ticket offers you needn’t lament “If I were a Rich Man”.  “Miracle of Miracles” Silversurfers are delighted to present our theatre ticket deals to this classic musical.  Our No booking fee tickets* and free ticket-upgrades* mean there hasn’t been a better time to book Fiddler on the Roof tickets, make sure you get yours before the limited run sells out.

To purchase tickets and for further information click here

No Booking Fee valid on all performances until 13 Apr 2019.  Click here to find tickets.

Free Upgrade to Premium Ticket valid on all performances until 26 Mar 2019.  Click here to find tickets.