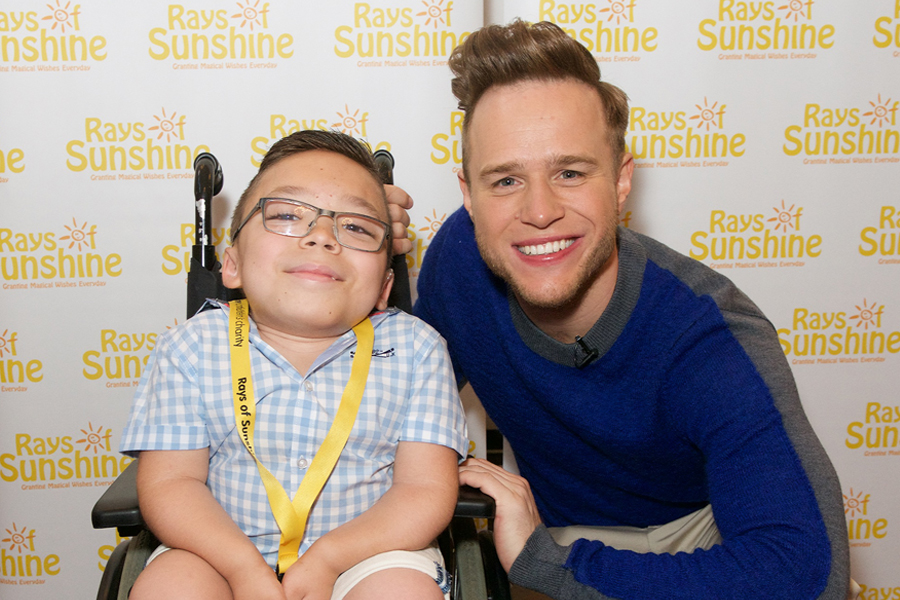 Red Rock Entertainment have been working with the Rays of Sunshine Children’s Charity, and brightening the lives of children with serious or life limiting illnesses.

Red Rock Entertainment, who specialise in financing film projects, have been supporting the charity by enabling children to take part in some exclusive experiences within the film industry.

The company are based at the world famous Elstree Film Studios in Boreham Wood, which has enabled them to provide the children with behind the scenes tours, private screenings, and access to the props and outfit departments (which have proven particularly popular with the kids!).

Selected children have even met up with their favourite stars and some have appeared as extras in some of the productions.

Singer Olly Murs, is an ambassador for the Rays of Sunshine Charity and commented

It’s not just the younger children getting treated from Red Rock Entertainment either.

Jack, An 18-year-old aspiring actor living with Cystic Fibrosis, was given exclusive access to the set of Steven Berkoff’s film adaptation of  ‘The Tell Tale Heart’, directed by Stephen Cookson.

“Jack had an amazing time, so thank you. He met Steven [Berkoff] and had a chat with three other actors. He has talked non-stop about it. We were shown some props and saw the filming, Jack even had the opportunity to say action and cut. I think Jack is now dreaming it maybe him one day! We were all made to feel so welcome and had a great time. Many, many thanks Red Rock Entertainment and Rays of Sunshine.”

17 year old Luke from Ealing, who is living with Neuroblastoma, visited the studios with his best friend Jake, and got to meet actor James Buckley (from the TV series Inbetweeners) on the set of his film ‘The Comedians Guide to Survival.

Jack told us “James was so down to earth, just like his character Jay from the Inbetweeners! It was great to be able to hang out on set and hear some industry secrets.  Thanks again to Rays of Sunshine and Red Rock Entertainment for inviting me down for such a great day.”

Outside their work for charity, Red Rock Entertainment work alongside directors and producers to make sure that film and television projects stay within their financial budget and timeline.

They can also offer Silversurfers a number of tax efficient SEIS, EIS, and Equity based investment opportunities. Investors have the opportunity to visit the set during filming, appear as extras, and attend private screenings.

Find out how you can invest and be part of the glitz and glamour of the film industry. ↵

Have your family’s names in the credits!

The contents of this article are for reference purposes only and do not constitute financial or legal advice. Independent financial or legal advice should be sought in relation to any specific matter. Articles are published by us without any knowledge or notice of the circumstances in which you or anyone else may use or rely on articles or any copy of the information, guidance or documents obtained from articles. We operate and publish articles without undertaking or accepting any duty of care or responsibility for articles or their contents, services or facilities. You undertake to rely on them entirely at your own risk, and without recourse to us. No assurance of the quality of articles is given or undertaken (whether as to the accuracy, completeness, fitness for any purpose, conformance to any description or sample, or otherwise), or as to the timeliness of the publication.