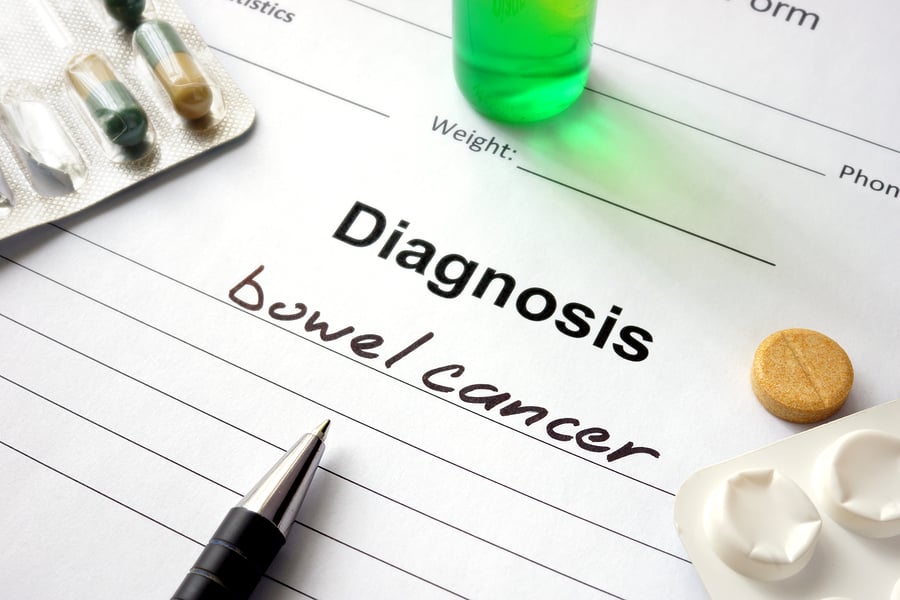 Bowel cancer can affect anyone, regardless of their age or background

According to Bowel Cancer UK someone is diagnosed with bowel cancer every 15 minutes. It is the UK’s second biggest cancer killer.

If diagnosed early enough, bowel cancer is treatable and curable. However, the rate of survival drops dramatically the longer it remains undiagnosed.

Too many people remain unaware of the warning signs and as April is Bowel Cancer Awareness Month now is a great time to get to know what they are. Symptoms can include:

Blood in your stools (poo)

Perhaps the most well-known symptom of bowel cancer is bleeding from the bottom or blood in the stools, which can vary from a small amount on the tissue after you wipe, to a substantial amount mixed in with your poo.

Most often, blood in the stool is from piles (haemorrhoids), especially if it is bright red, fresh blood. Piles are like swollen veins in the back passage. These veins are fragile and can easily get damaged when you pass a bowel motion, causing a little bleeding.

If you notice any bleeding then book an appointment with your doctor so they can give you an examination and establish what is causing it.

A change of bowel habits could also be due to irritable bowel syndrome (IBS), which affects around 20% of the UK population but it’s always important to check with your doctor.

Feeling the need to strain

A feeling of needing to strain in your back passage (as if you need to poo), even after opening your bowels.

Bowel cancer may lead to a lack of iron in the body, which can cause anaemia (lack of red blood cells). If you have anaemia, you are likely to feel very tired and your skin may look pale.

If you are concerned by the level of exhaustion you’re feeling despite getting lots of rest, then you should seek medical advice to investigate the cause.

You may have pain or a lump in your stomach area (abdomen) or back passage. See your GP if these symptoms don’t go away or if they’re affecting how you sleep or eat.

Abdominal pain, bloating, gas, indigestion or general stomach pain are very common, and are usually a reflection of your diet. But if you’ve noticed these symptoms on a more frequent or severe basis or if they are constantly keeping you awake a night you should get it checked out with a doctor.

Stomach pain could be a symptom of bowel cancer if a tumour is blocking part of the bowel and so disrupting the digestive system.

This is less common than some of the other symptoms. Speak to your GP if you have lost weight and you don’t know why. You may not feel like eating if you feel sick, bloated or if you just don’t feel hungry

It is important to understand that the above list of symptoms do not automatically mean you have cancer and are usually caused by something far less serious – but it’s always best to get them checked by your doctor quickly.

What exactly is long Covid and how do you know if you’ve got it?

World Sleep Day: How to sleep if you share a bed with someone who struggles to drift off