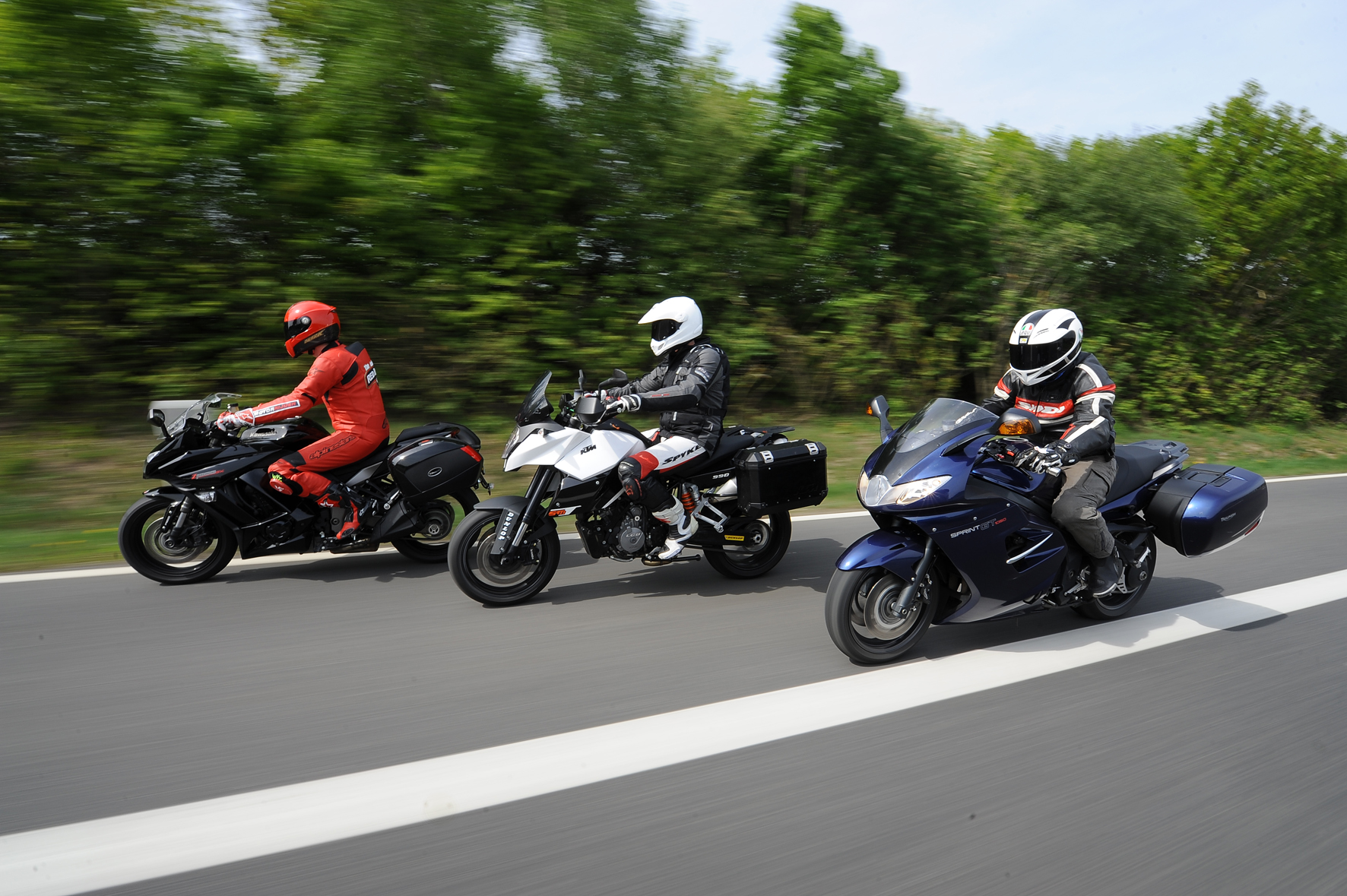 Equipped with full fairings and side storage as optional extras, sports tourers were more comfortable than sports bikes and they didn’t mind spirited riding either. These days, sports tourers are less popular. They’ve become as rare as hen’s teeth due to economic mile munchers like BMW’s K 1300 S and heavy adventure bikes that are more focused on road use.

At the end of last year, Triumph were the only brand to present a sport touring bike , according to the faithful old recipe with the Sprint GT 1050, while KTM and Kawasaki have approached the theme from a brand new angle. Its rivals take a different approach but they both have the same target audience, the sports touring rider.

On the way to the Nurburgring in Germany, a few things were instantly obvious. The Triumph has the most luggage capacity. It’s also the only bike to have a centre stand. The side panniers hold a full face helmet, as do the Kawasaki’s but the KTM’s don’t because the panniers open from the top. The Sprint GT and KTM both have a handy luggage rack, but the Kawasaki doesn’t. The Triumph is the only bike of the three to have a lockable storage compartment in the fairing, the fuel tank is one litre larger than the other two on this test and as it’s metal, which is ideal for a magnetic tank bag.

The Triumph also consumes noticeably less fuel, 5.8 litres per 100km and the others need a litre more. So in short, if you’re just interested in touring, the Sprint GT is theoretically the best bike of the three. It may have more touring assets and be more functional than its predecessor but it isn’t any prettier and it doesn’t feel more modern either, especially in comparison with the rest of the Triumph range that have made huge leaps forward when it comes to equipment and finish. It’s almost as if the GT has been left in the previous decade. Skinny front forks that have only one-way adjustment, simple brakes, poorly fitted fairing panels, thick grips and huge handlebar weights.

Even before you’ve ridden it, the Sprint GT feels dated and the first dynamic ride doesn’t really change this initial impression. The gearbox could be slicker and with the long throttle cables, the engine reacts smoothly but rather lazily to the commands of your right wrist. The rear suspension is so soft that I stop to adjust it after the first roundabout. This Sprint GT has only done 7,000 km but it doesn’t give me the solid freeplay free feeling that you would expect from a new bike. So when we start our journey, the Triumph has already been banished to the underdog position. But during the trip, it still manages to offer a few pleasant surprises and manages to somehow charm the riders.

None of us are really excited about the GT when there’s also a SX and SMT available but we all get off it with a satisfied nod of the head. It has light steering and handles well in the corners. At first the front feels vague and doesn’t offer much confidence but after three days in the saddle, it’s clear that the Triumph can keep pace with the other two bikes without issue, although the quality of the suspension is questionable.

It is surprisingly more planted and precise on the track than the KTM and it has more ground clearance than expected which means it only loses out to the SX on the fast sections. On paper it’s down 8bhp to the Kawasaki but in reality it feels (partly because of the extra 40kg) like double that amount. On the normal roads, the Triple doesn’t feel overly impressive but it is creamy and pleasant which makes you enjoy its supple character, leaving it in third or fourth gear pretty much all day.

The KTM has fully adjustable WP suspension, radial Brembo brakes, Marchesini wheels and since the model year 2011, standard ABS, emergency indicators and a 12V socket. It’s all neatly wrapped in a package that weighs less than 200kg without luggage. The SMT is a useable bike. It’s easy to ride, has great handling, it’s comfortable and is always fun, whether you take it for a short blast or a longer journey. The big metal panniers are an improvement over the smaller soft luggage but they do come with an ugly rack and you can only lock them with a padlock. They don’t have handles as standard so you have to carry them in the same elegant way as you would a cardboard box. And if you do want handles, Velcro versions are available as an optional extra.

Apart from that, we have nothing but praise for the SMT even though it feels huge when you get off the Kawasaki SX. It’s a tad less easy flick about than I remember which could be due to the extra luggage or the less sporty Dunlop RoadSmart front tyre. It has a totally different seating position to the other two bikes which takes some getting used to but it doesn’t take more than three corners before you’re in total SMT mode. The alert engine that reacts slightly abruptly to throttle openings at low speed, proves once again that 116 bhp is more than enough to have a ball on public roads, thanks to light internals that make the engine feel very responsive. It catapults you from one corner to the next and the engine offers a clear connection between your right hand and the rear tyre, letting you wind on the throttle earlier.

The only downside is the rather long lever action to change gear. Both the front and rear brake offer the best feel on the market and they’re simply superior in this test. When you ride the KTM after the Triumph, you realise that names like Brembo, Marchesini and WP really add something to the experience. Where the Sprint wraps itself in a comfortable blanket of vagueness, everything about the KTM feels direct and crystal clear, especially on poorly surfaced roads where the SMT is unbeatable.

Above 100mph, the twin-cylinder engine gets a little out of breath compared to both the triple and four in line Kawasaki, and it also starts to move in the frame a little. It’s not therefore the best bike to stick some solid lap times in on the Nurburgring. It might not be the best, but it is huge fun.

The SX feels like a spine-tingling adrenalin rush compared to its rivals here. The four cylinder engine wouldn’t be out of place in a full-on sports bike. It might have ‘only’ 138 bhp but it feels enraged, intense and incredibly strong. It picks up from 2000rpm with a noticeable surge and as the revs rise it pulls harder and harder on the chain. The deep raw sound that accompanies it only makes the ride more exciting as does the short-shifting gearbox with close matching ratios. I hold my breath as the track drops away and then to the right but the brakes do their job. They don’t offer the same bite as the ZX10R but if you just squeeze a bit harder, the feedback and power is good and bike remains stable.

It also handles with precision. It’s not especially light, particularly with the loaded panniers but it is neutral and very rewarding. Only the scraping sound of the foot pegs touching down reminds you the SX is based on a roadster. It leaves the other two bikes trailing behind and in this test, the Kawasaki is without a doubt the Lord of the Nurburgring. Our first impressions however weren’t so solid. It was hard to tip into a corner, which was definitely not the case when the bike was introduced six months ago. And when you really have to wrestle a bike into corners, other things also start to annoy you, like the vibrations in the foot pegs, or the turbulence when you put the windscreen in the highest position. Or the panniers that aren’t as handy as the Triumph’s, and the unattractive rack they attach to. After re-checking the tyre pressures and fiddling with the suspension the bike’s handling is improved but it remains nervous and bouncy on bumpy surfaces. It doesn’t offer the same reassurance of the KTM on poor surfaces and lacks the sure footedness of the GT.

So even though Kawasaki have pushed the boundaries when it comes to sporty performance, the Z1000SX doesn’t win this test. In the end, it’s the KTM that takes the lead. With its longer suspension travel and a responsive but controllable power unit, the SMT is the only bike that doesn’t translate pot holes to frustration. The Z1000SX has a tendency to run wide and the softly suspended Triumph almost folds in half. The KTM just isn’t fazed. You also have the most leg room on the Austrian bike and the most money left in your pocket. 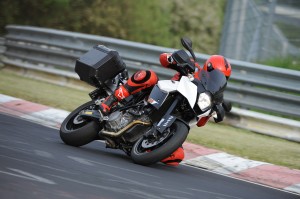 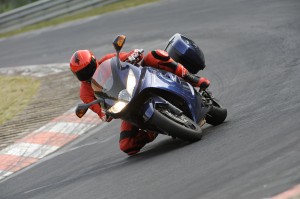 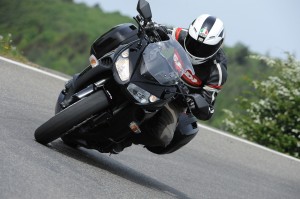