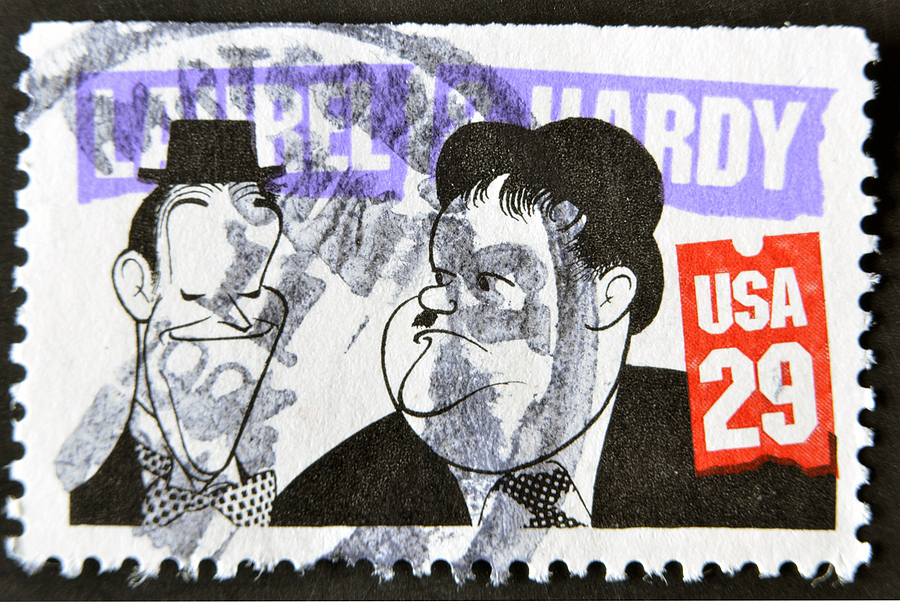 A double act or comedy duo is a form of comedy originating in the British music hall tradition and American vaudeville. Here are 5 of our favourites:

Laurel and Hardy were a comedy duo act during the early Classical Hollywood era of American cinema. Englishman Stan Laurel and American Oliver Hardy became well known during the late 1920s to the mid-1940s for their slapstick comedy, with Laurel playing the clumsy and childlike friend of the pompous bully Hardy.

Laurel and Hardy made over 100 films together, starting first in silent movies and then making the transition to talkies in the 1930s. They were among the world’s show business elite for three decades after their first meeting in 1921 and their brand of comedy influenced many generations of performers. They still have appreciation societies and fan groups all over the world.

A popular American comedy team of the 1940s and early 1950s Bud Abbott and Lou Costello specialized in rapid-fire patter and knockabout slapstick. Working on radio, in film and television they are regarded as the archetypal team of burlesque comedy.

During the early 1950s, they found renewed popularity on television, both as recurring hosts of The Colgate Comedy Hour (1950–55) and as stars of The Abbott and Costello Show (1952–54).

The double act of Martin and Lewis consisted of Dean Martin as the laid back, singing straight man to Jerry Lewis’s zany clowning, with both joining forces for a rousing finale of music and comedy.

Their first film, My Friend Irma (1949), established Martin and Lewis as box-office stars, and the follow-ups My Friend Irma Goes West and At War with the Army (both 1950) were equally successful. Martin and Lewis became the most popular comedy team of the decade and appeared in 16 films in eight years, includingThe Stooge (1951), Scared Stiff (1953), Living It Up (1954), Artists and Models (1955), and Hollywood or Bust (1956) – their last film together

Eric Morecambe and Ernie Wise, known as Morecambe and Wise, were an iconic English comic double act, working in variety, radio, film and most successfully in television. Their partnership lasted from 1941 until Morecambe’s death in 1984.

They had a series of shows on British television that spanned 20 years and have been described as “the most illustrious, and the best-loved, double-act that Britain has ever produced”

Morecambe and Wise had many catchphrases which entered the English language, such as “What do you think of it so far?” “Rubbish!” and who could forget their silly skip dance performed to the song ‘Bring me Sunshine’?

The Morecambe and Wise Christmas Show on BBC in 1977 scored one of the highest ever audiences in British television history.

Ronnie Barker and Ronnie Corbett featured in the comedy sketch show The Two Ronnies which ran on the BBC from 1971 to 1987.

The Two Ronnies always opened and closed at the newsdesk, which featured the Ronnies as newsreaders, reading spoof news items. This gave rise to the famous catchphrase at the end of each show:

Corbett: That’s all we’ve got time for, so it’s “Goodnight” from me.

Barker: And it’s “Goodnight” from him.

Which is your favourite comedy double act?