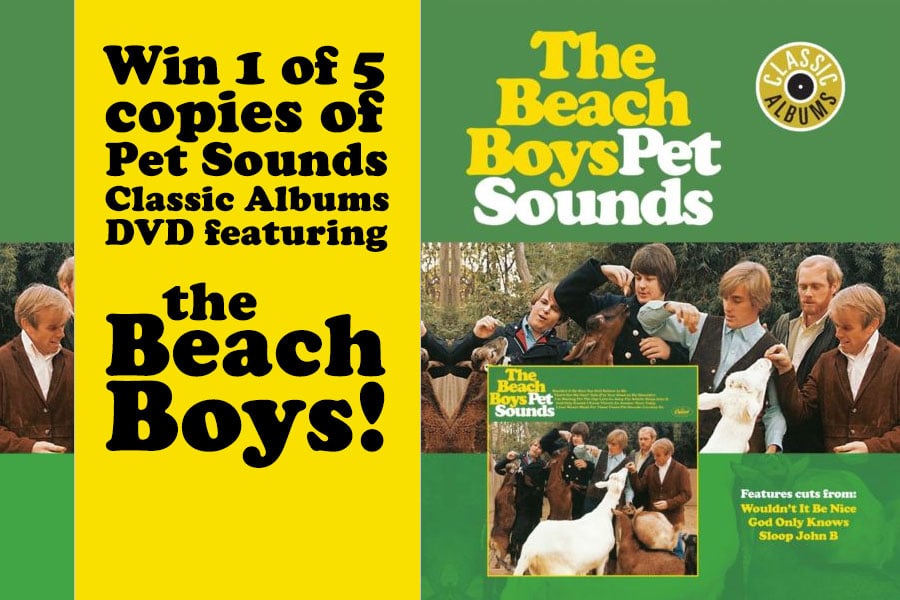 This month you could be in with a chance of winning 1 of 5 copies of Classic Albums – Pet Sounds DVD featuring The Beach Boys!

Groundbreaking and ahead of its time, Pet Sounds  – the 11th album by The Beach Boys – was a pioneering feat in production, sound, and songwriting.

Eagle Rock Entertainment gives fans a behind-the-scenes look at its creation with the release of Classic Albums – Pet Sounds DVD, the latest addition to the acclaimed & award-winning Classic Albums series.

The DVD features over 30 minutes of additional interviews not included in the broadcast version, and clocks in at over one and half fascinating hours. Classic Albums – Pet Sounds features cuts from many of the iconic Pet Sounds album tracks including “God Only Knows,” “Wouldn’t It Be Nice,” “Sloop John B,” “I Know There’s An Answer,” “Let’s Go Away For A While,” and “I Just Wasn’t Made For These Times.”

Pet Sounds was recorded in late 1965 and early 1966 about a year after Brian Wilson had withdrawn from playing live with The Beach Boys in order to concentrate on composing and studio work. While the rest of the band were out on tour, Brian Wilson worked in the studio creating multi-layered compositions with painstaking attention to detail utilising orchestration, sound effects and unusual instruments. When the band returned from tour, they went into the studio to add their trademark complex vocal harmonies. The new direction of the music caused some consternation within the group. The program explores the band’s relationship at this time as well as the creation of the music through interviews with all the surviving Beach Boys and others involved in the creation of the album.

Congratulations to our winner
Sharon Kellett, John Jones, Ann Parmakis, George Williamson, & Diane Gray - we have emailed you and your DVD will be sent to you in the post!
We will contact you via email to assist in claiming your prize!