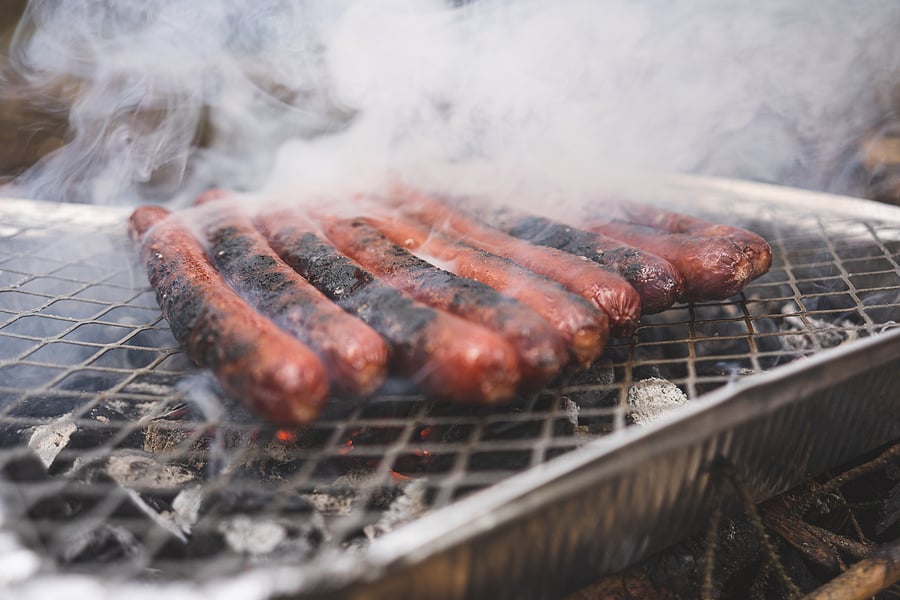 Disposable barbecues have been banned across a swath of open countryside in Hampshire and Dorset after a campaign led by the New Forest national park authority.

The move to ban the sale of disposable barbecues began last May in the wake of a catastrophic fire in Wareham Forest, Dorset, which burned slow worms and lizards alive and damaged more than 200 hectares (500 acres) of the site of special scientific interest. The fire was thought to have been caused by a disposable barbecue or a campfire.

Disposable barbecues are increasingly popular. In just one weekend last summer in the New Forest national park alone, rangers working with the fire service extinguished more than 60 unsafe barbecues, many of which had been left unattended.

In addition to the danger of fires, there is also the issue of smoke from BBQ’s billowing over others which can be deemed as anti-social behaviour.

There are risks with using any charcoal barbecue but there are additional risks to using disposable barbecues:

What are your views? Have you ever used a disposable barbecue? Would you take one with you on a picnic? Do you believe them to be dangerous enough to be banned?

648 people have already voted, what's your opinion? Yes No

NormaB4
13th Jun 2021
1
Thanks for voting!
Unfortunately, due to the current situation, many people are going to the "countryside" with no knowledge of the environment they are in. They are not used to having to fend for themselves and take their rubbish home. Don't think that something might catch fire. It is always the few who spoil things for the majority who behave in a sensible manner. Consequently we need to ban bbqs in the countryside.
ReplyFlag as inappropriate

DianeH79
12th Jun 2021
0
Thanks for voting!
if disposed of sensibly then no problem my son badly burnt his foot on one because some idiot decided to bury it in the sand, only he didn't wait till it had gone out and didn't bury it deep enough three inches if that thats why i'm against them in public places
ReplyFlag as inappropriate

Lionel
12th Jun 2021
2
Thanks for voting!
Whilst at a gut level I agree with everyone wishing to ban these barbecues, and I have a good reason for that, having herded 2,000 head of sheep off a North Yorkshire moor during such a fire, I must plant a note of caution here.

It's very easy to call for a ban on almost everything that doesn't suit us. I do it too! But most governments in my adult lifetime have taken the public's willingness to ban a small thing as a licence to ban everything not suiting them. Further, governments and local councils almost never address the most vital matter's to us - drugs, abortion, misuse of welfare, elder care and immigration, to name but a very few, but instead make a song and dance of dealing with an insignificant item.

We had a local council recently threatening to enact a by-law forbidding smoking outside pubs and restaurants. In practice that is just flim flam. It doesn't address the very serious social problems in their catchment area. It doesn't address the crime in their area. But it has gained them national press coverage. They've even got a Speaker's Corner slot on Surfers!

Why don't we ever discuss the real root causes of irresponsible, selfish and criminal behaviour? Why do we accept criminality and violence without a word? Why won't we address possible answers for these problems. Because they're distasteful to us, or we'll be thought to be barbaric? Not PC? Or is it a case of it doesn't directly affect me so... That's as bad an attitude as the crime itself.

Until we as a nation address some fundamental issues in our country, without being afraid of the consequences of speaking out, until then we will have ever increasing amounts of burning of countryside, forests, street knifings etc., the list is almost endless.

Perhaps in these days when we are cowed into timidity the above will be evaluated as hate speech. I would contend its common sense.
ReplyFlag as inappropriate

Hazbeck48
12th Jun 2021
4
Thanks for voting!
As it has sadly been proved over the past few years, many of the people using portable barbecues are totally irresponsible when it comes to disposing of them safely. Therefore, in order to save wildlife and the countryside, I think the only reasonable course of action would be to ban their use in public spaces. Yet again, it’s a case of the minority spoiling things for the majority, sadly.
ReplyFlag as inappropriate

MargaretR97
12th Jun 2021
2
Thanks for voting!
Sadly I do think they should be banned because there are far too many irresponsible people using them and they can cause such devastation if not fully extinguished.
ReplyFlag as inappropriate

Rosedeb
12th Jun 2021
2
Thanks for voting!
Unfortunately there is a need to legislate for the irresponsible amongst us
ReplyFlag as inappropriate

Munsterlander
12th Jun 2021
5
Thanks for voting!
We were on a beach last year and lots of families had them. the stench was awful and we noticed that there were also bbqs just lying in the sand having been left there and presumably then washed into the sea. It is bad. Ban them from being sold that will put an end to it.
ReplyFlag as inappropriate

Wilf
12th Jun 2021
4
Thanks for voting!
Yes they should be banned. I have had to take a fair few back home from around here and last year I found one on a common that was exceptionally dry and it could have set the whole area on fire. People leave them as litter as they are too hot to put in a car and take home
ReplyFlag as inappropriate

MargaretW283
12th Jun 2021
4
Thanks for voting!
Should be banned on beaches also after two people have horrific burns on their feet. Barbecues had been moved, as they thought , to a safer place but the sand where they had been retained the heat and was red hot caused the burns, they both commented my feet melted!
ReplyFlag as inappropriate

[email protected]
12th Jun 2021
3
Thanks for voting!
Ban them! Too many irresponsible people. We have several incidents of these things buried in the sand causing injuries, and leaving areas of burnt grass in parks. The litter that is left adds to the mountains collected daily by our hardworking volunteer litter-pickers.
ReplyFlag as inappropriate

Mrsnannybee70
12th Jun 2021
6
Thanks for voting!
I have felt the result caused by a disposable BBQ left in the sand on a beach whilst still hot - it wasn't immediately visible and I trod on it and sustained a rather nasty burn on the sole of my left foot. Not good and I think they should be banned but I also think outdoor BBQ areas would be a good idea for those who want to use them
ReplyFlag as inappropriate

Dayzee
11th Jun 2021
7
Thanks for voting!
Even where there are notices in beauty spots not to use these BBQs, people still use them. The grass is scorched afterwards and often BBQ discarded. Shame we can’t have outdoor BBQs areas as they do in Australia.
ReplyFlag as inappropriate