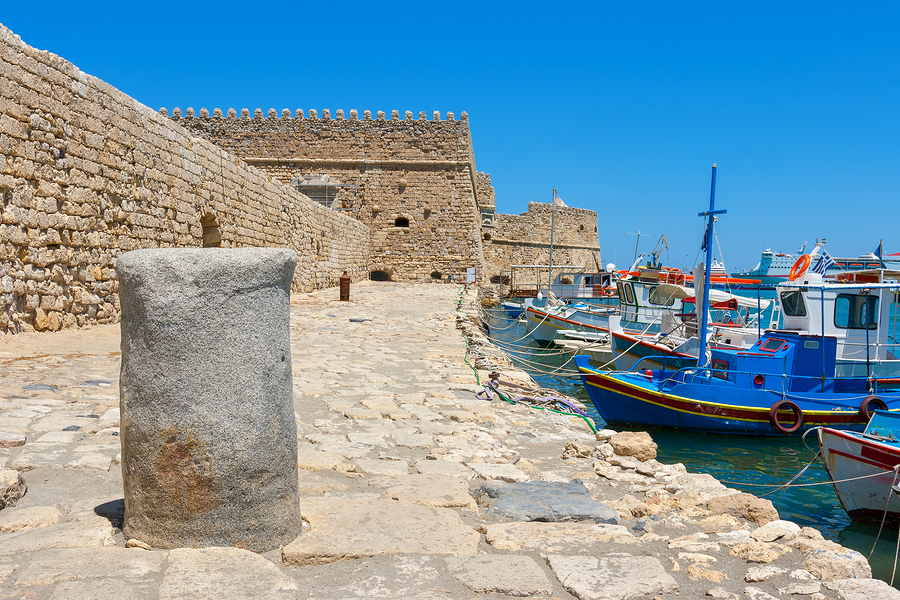 Exploring the History of Crete

If you’ve started thinking about taking a holiday in Crete, you’ll know it’s an island rich in history and tradition.

Take a stroll along the seafront at the Venetian port of Hania, or wander down the streets of the sprawling city of Iráklion and you’ll be thrown into a historical journey of discovery.

While Crete plays a significant part in the culture and economy of Greece, it has its own unique character too. It has the distinction of being at the heart of Europe’s earliest recorded civilisation, the Minoan empire of 2700-1420 BC. Since then, in the words of British writer Hector Hugh Munro, it has “produced more history than it can consume locally.”

The cave of Zeus

Crete is said to be the birthplace of Zeus, the father of the Gods in Greek legend. According to the myth, Zeus was born in a cave, but which cave is open to debate. Whether it was either nestled at the foot of Mount Ida towards the centre of Crete or in the Psychro cave towards the east, above the Lassithi Plain, is still disputed.

Whichever tale you choose to believe, the locations are worth a visit, both for their historical value and their breathtaking splendour. Mount Ida rewards dedicated hikers and walkers with a cornucopia of flora and fauna to take in, though you won’t find much in the way of facilities or help once you get off the beaten track.

The cave of Psychro, also known as the Dictaean cave, consists of five chambers of varying sizes and, if you follow the guided path down to the lowest one, you’ll be met by the most memorable sight: a subterranean lake surrounded by imposing stalactites and stalagmites. It is at the back of this lake that Zeus is said to have been born.

The ancient Minoan Palace of Knossos lies close to the city of Heraklion and is one of the most dramatic and beautiful historical sites in all of Crete. While much of the Palace is in ruins, there are several reconstructed sections that give you a sense of the grandeur and power of the Minoans. It’s a vast site, too — you can easily spend several hours wandering around the broken-down pathways and rooms of the palace in the Mediterranean sunshine.

Believed to have been rebuilt after an earthquake, the Palace of Knossos originally featured royal quarters, shrines, treasure houses, courtyards and storerooms on a vast scale. The Palace was mentioned in many famous Greek myths, including the tale of Theseus and the Minotaur. As the capital of the Minoan empire, Knossos is considered Europe’s oldest city.

There is plenty of history to explore in Heraklion too, from the Koules Venetian Fortress that dominates the harbour, to the elegantly designed Church of Agios Titos. To fully do the area justice, pay for the services of a knowledgeable guide, book yourself on a historical tour or at least carry a decent guidebook with you.

On the north coast of Crete lies Rethymno, home to fortresses, museums and historical sites that are must-sees for anyone interested in the history of the island. Take a walk to the Old Quarter and discover the grand Rimondi Fountain and the triple-domed Neratzes Mosque (converted from a church in the 17th century). Close by is the Historical & Folk Art Museum, which offers an authentic and well-informed glimpse into the past.

Also located in the Old Quarter is the 16th century fortress designed to ward off attacks from pirates and Turkish invaders. Further south you’ll find the Porto Guora, or Great Gate, the last remnants of the defensive wall that was once crowned with the Lion of St Mark (now on show in the archaeological museum). Throughout Rethymno and many other Cretan towns and villages you’ll find ancient networks of streets that have stood untouched for centuries.

The ancient buildings you’ll find all across the island of Crete highlight its past as both a deeply spiritual and heavily fought-over land. When inhabitants weren’t worshipping, they were fending off enemy forces. Consider the impressive Baroque-style church of Moni Arkadiou, for example, with its ornate bell tower and eight Corinthian columns

Then there’s the Chania fortifications on the north-west corner of the island, whch were constructed to protect the city from possible siege. Much of the wall is still standing and, if you venture up to the top, don’t forget to take your camera, as you’ll find a number of excellent photo opportunities once you get up there.

Crete is a dazzling and exciting destination for all history lovers, with places of great note scattered the length and breadth of the island. From the ancient city of Aptera, which includes some amazingly well-preserved structures, to the Dorian stronghold of Lato, set amid the mountains of eastern Crete, there’s much to explore and enjoy.

Even historians need time for relaxation and entertainment. And of course Crete has plenty to offer outside of its ancient attractions. Spend time on the island and you can treat yourself to a cosmopolitan night out in one of the bustling cities of the northern coast, or take a reflective wander down one of the quieter beaches of the south. From wine tasting to water sports, there’s a wide range of activities on offer.

You’ll be spoilt for choice when it comes to accommodation as well, with Crete’s many hotels providing a pleasing level of comfort for the price. Whether you try the luxury of the Aquila Atlantis or the more wallet-friendly Iraklion, you won’t come away disappointed. And, as always in Greece, the food and wine are of the highest quality.

Crete is much more than a sunny holiday destination with a handful of notable ancient places. In fact, it’s one of the most historically significant locations in all of Europe. Book a visit and you’ll find yourself amazed by the palaces, churches, monasteries, mosques, ruins and fortresses that make up this gorgeous island. It’s no wonder that the Father of the Gods himself was born here.