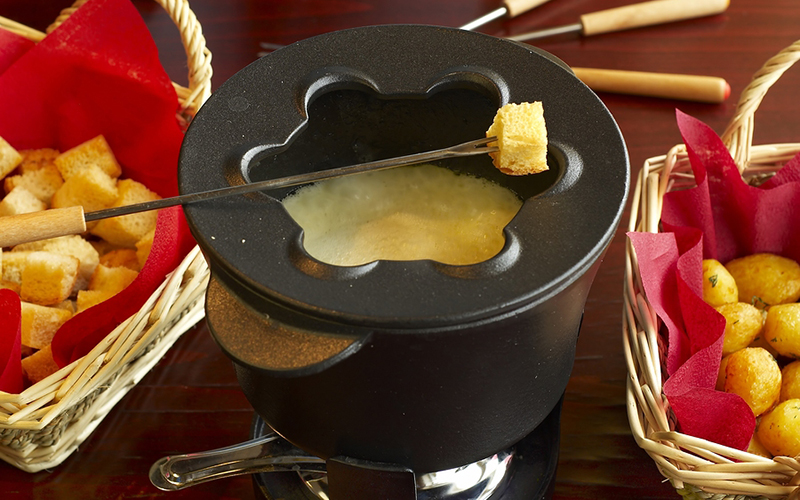 Switzerland is one of the world’s most popular destinations for skiing holidays. But the quality of its food is less well known. Thanks to its blend of French, German and Italian traditions, Swiss food is one of Europe’s unsung cuisines.

Wherever you go in Switzerland, there are great restaurants to be found – though they’re often rather expensive. Not sure where to eat in Switzerland? Here’s where to find some of the country’s top restaurants.

Where to eat in Switzerland

The world headquarters of the UN, Geneva is Switzerland’s most international city and is home to some of its best restaurants. Il Lago at the Four Seasons Hotel serves up tantalising Italian dishes in magnificently opulent surroundings and L’Entrecôte Couronnée is an authentic local bistro that showcases the best of local produce.

Zurich, Switzerland’s largest city has a fantastic restaurant scene too. At KINDLI, you’ll get to taste local classics – including Zurich-style veal and delectable Swiss beef – in sophisticated surroundings. Hummer and Austernbar is one of the best places to eat and drink in the city, and Gertrudhof is a small but cosy restaurant serving traditional Swiss-German meals. The capital Bern has a few gems too: don’t miss Les Terroirs in the Old Town or the Michelin-starred Meridiano.

There’s plenty of choice outside Switzerland’s main cities too. The ski resort of Nendaz, for instance, is home to a range of fantastic eateries. At La Mont-Rouge, diners are treated to exquisite seasonal food, while La Lanterne et le Vieux-Chalet is a welcoming gastropub that’s a favourite with travellers in the area. And in Shernelz near Lake Biel, you can enjoy first-rate local food and views over St. Peter’s Island when you dine on the terrace at Restaurant Aux Trois Amis.

If your French and German is shaky, you might have trouble translating menus in some of the Swiss restaurants you visit. However, there are always a few classics to look out for. In the French part of Switzerland – where you’ll find Geneva and Lausanne – traditional dishes are often cheese-based. Fondue, for instance, is simply melted cheese served in a pot to share, with bread and vegetables provided alongside for dipping. Another local favourite, raclette, involves cheese being melted at the dinner table, then scraped over potatoes. It’s served with pickles and cold meat on the side.

German-influenced cuisine in Switzerland is typically a more robust affair. Rosti – one of the country’s most famous dishes – is a fried potato-cake made from grated potatoes, usually served with meat. You’ll also find several different types of bread here too like Zopf, a rich plaited loaf.  Muesli – especially Bircher muesli – is another speciality of Switzerland. Rather than eating it with milk or yoghurt, as we would in the UK, Bircher muesli is soaked in citrus juice (usually lemon or orange) and eaten with chopped apple instead.