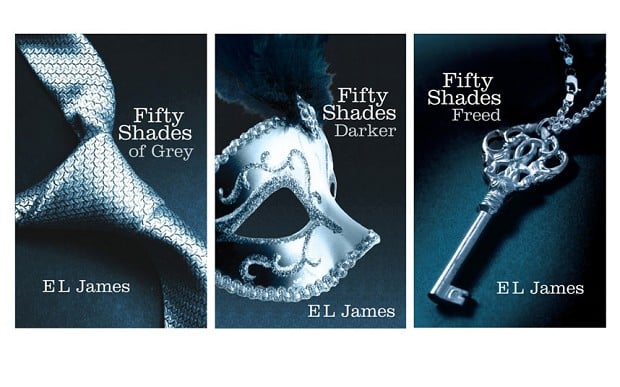 So E.L James is still making news on a daily basis, about her Fifty Shades Trilogy, which back in February 2012 were only available as downloads, and are now gracing the shelves of supermarkets for as little as £10 for all three books.

In the last week of June 2012 the combined sales of all three books reached 856,522 copies, compared to the fourth best seller which sold 19,011 copies.  These figures are astounding!  E L James is a former TV executive, wife and mother of two based in West London. Since early childhood she dreamed of writing stories that readers would fall in love with, but put those dreams on hold to focus on her family and her career. She finally plucked up the courage to put pen to paper with her first novel, Fifty Shades of Grey.

I first read Fifty Shades of Grey earlier this year, when Amazon were selling it for nearly £20 a copy! I had been reliably informed from a British friend who resides in the USA that this was the book to be causing a stir in the ‘desperate housewife’ book clubs of New York.  Wanting to be ahead of the game, I ordered a copy……

There is a good reason for all the buzz and hype that surrounds this novel. Yes it has lots of delicious sexual tension and exploration, but it’s the setting, the story and the fullness of the characters that keep the pages turning. This is a book that speaks on many levels, but the psychological level is the most entrancing. We all want to know why? The author cleverly weaves a few answers into the storyline, but leaves us begging for so much more, much like both the female protagonist Ana Steele and it’s male protagonist Christian Grey, who need more than the other can give. This is a story of debasement and the potential of redemption. The themes in this book tread a very delicate line between the world of BDSM and the psychological profiles of dominant personalities who want ownership and control over others in a non-sexual way. This novel is not fantastical or based in an unreality that few of us will ever explore. This novel speaks with universal truth as to how we all interact with each other and universal truth is what gives this novel it’s widespread audience.

Fifty Shades Darker is a continuation of the story without so much as skipping a beat in terms of time and place. The plot thickens and becomes much more of a thriller. The level of carnal activity doesn’t decrease, if anything there is so much that it’s exhausting to read, however always something interesting and new. It’s a clever adult writer that can find a million and one ways to make erotica interesting. We delve further into the past of Mr Christian Grey and into his psyche and the other characters are being fleshed out. There is more of the redemptive element in this novel too. Miss Ana Steele is the catalyst for the therapy that is taking place. The story is left set up very nicely for the third in the Triology Fifty Shades Freed, but I sense very much that the freedom is going to have a heavy price tag, not the sort that money can buy which would be too easy for Christian Grey, but perhaps an emotional price?……

Fifty Shades Freed.  And this is where the trilogy falls to pieces in my eyes.  There was so much potential for the themes to progress into an intense psychological thriller, but for some reason the story line was less compelling.  The fantasy of the first two books was alluring, and the story line was less predictable to a certain degree, although shocking and like nothing I have ever read before. The language in Fifty Shades Freed became so repetitive, I skimmed through sections, only stopping to read the interesting parts. Even the sex scenes became tiring and repetitive, Ana’s multiple orgasms, the biting of her lip, the white linen shirts, the arguing and yes, the ‘inner goddess’ even became a bit tiresome.  I had to continue and read on until the end of the third book, in the hope that there may be some surprise or shocking ending, but I was disappointed.

The Fifty Shades Trilogy is a bit like Marmite ..  you either love them or hate them;  they are not particularly well written, the grammar is incredibly repetitive and immature on many levels,  but one thing is for sure ….  EL James must certainly be appealing to the majority judged by her book sales.  Isn’t it incredible what hype can do in the world of publishing?

HOT OFF THE PRESS:

Sales figures for all three books for week ending 13th July 2012 reached 1,442,882!!  This does not include e-books.  According to the Times, E.L. Jame’s erotic hit Fifty Shades of Grey,  has overtaken Mark Haddon’s The Curious Incident of the Dog in the Night-Time, and now has only two novels by Dan Brown, the Highway Code and The Girl with the Dragon Tattoo ahead of it in the list of adult bestsellers since records began in 1998.  Total print sales of have reached 2.3 million copies, with e-book sales reported to be running ahead of print copies, however the true figure for the novel may be in excess of 5 million copies.

Have you been tempted to read the trilogy?

I have been writing blogs and features for some years, specialising in recipes and all things related to food. Previously, I wrote for an environmentally friendly garden website, and have been a recipe advisor for Womans Journal. Mother of three and the ultimate multi-tasker, I am also the Creative Director for Silversurfers and manage all our social media too.