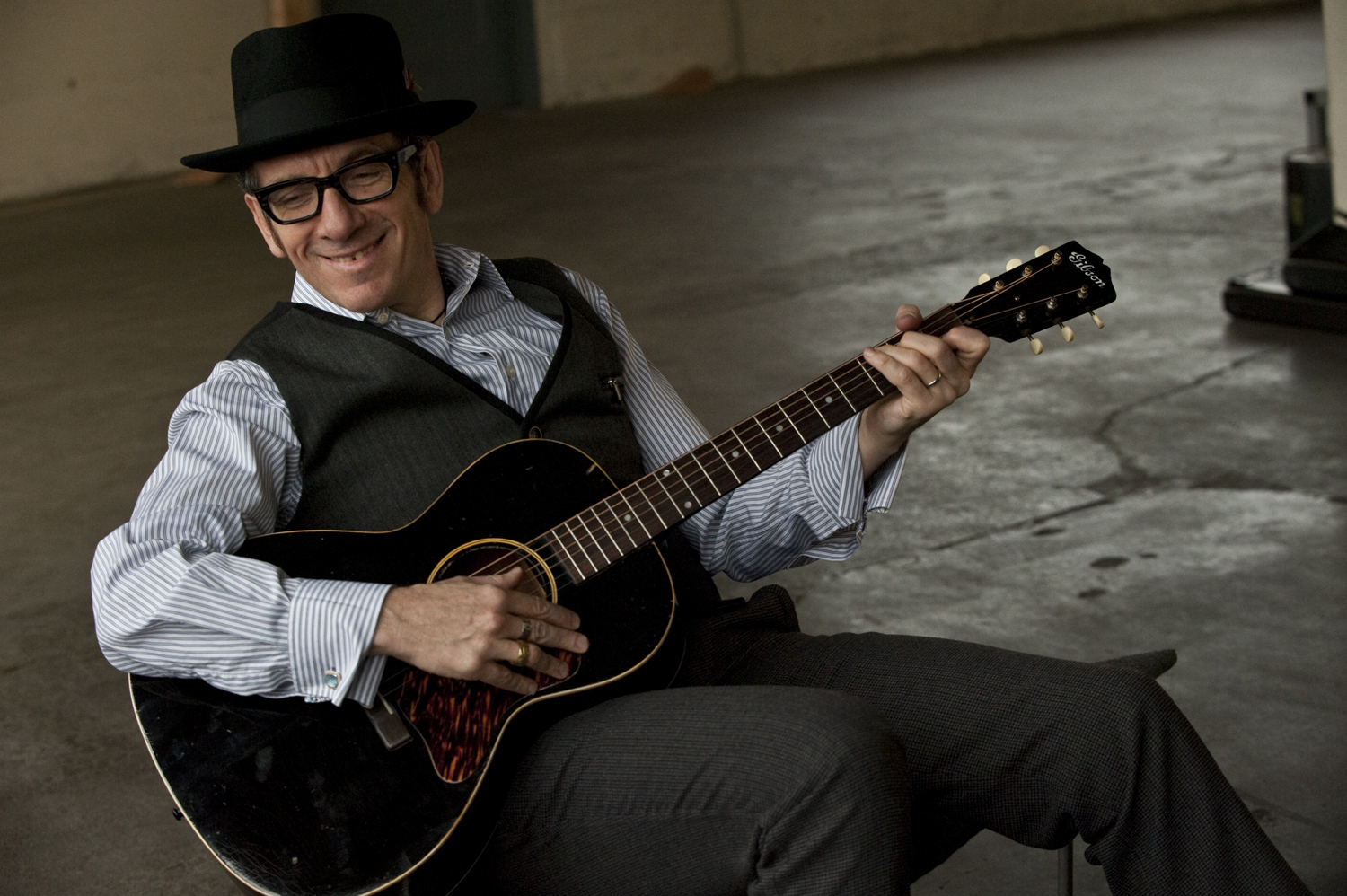 Elvis Costello’s wheeling back the years

Elvis Costello and his band The Imposters return to the UK later this month for a string of live shows in which the audience use his unique Spectacular Spinning Songbook device to select the songs. Andy Welch reports

Elvis Costello is doing one of his favourite things – relaxing in New York. “The vibe is very mellow,” explains the 58-year-old rocker.

The city has been a sort of home to British-born Costello for the past nine years. He stays there when he’s working, while the rest of his time is spent at home in Vancouver with his Canadian singer wife Diana Krall and their twin sons Henry and Frank.

Now the boys, born at the end of 2006, are of primary school age, Costello and Krall have had to become a little more settled.

“They start first grade in September, so we can’t be pulling them out of school to go wherever,” he explains.

“Having both your parents as working musicians will mean a lot of travelling, but we have to be considerate. They’ll still get to come on the tour bus with me when I’m out and about. That’s got to be better than taking geography, right?”

It’s a busy time for Costello, who’s currently writing and recording songs for a new album that will be released before the end of the year, while once again working with master songwriter Burt Bacharach on a stage adaptation of Painted From Memory, their 1998 album. He hopes it will develop over the 12 months and end up on stage in “the next few years”.

“We’re writing new songs, so it would nice to write songs for that. I’m also working long-term on a book of my own,” says Costello. “It’s not fiction, but it’s not non-fiction either. I’m not writing an autobiography. Everyone knows that story, everyone’s an expert, so I can only tell people what they don’t know.”

Much more imminently, he and his band The Imposters – essentially the backing band of his 1980s heyday, The Attractions, with one or two different members – are about to bring the Spectacular Spinning Songbook tour to the UK once again.

They did the same last year, and the reception the shows received surprised everyone – most of all Costello himself – so they’re back for a bigger trip lasting all of June and into July.

“We thought we’d just be able to go to the places we missed last spring,” says Costello. “We’re doing that, but the cities we played want to see us again too.

“The shows were brilliant last time around, the atmosphere at each really special, so we can’t wait to do it again.”

There is a special feature to the Spinning Songbook gigs – a giant wheel loaded with the names of 50 of Costello’s songs.

A member of the audience is invited up spin the wheel, and the band have to play whichever song it lands on.

There are showgirls on stage, and the lucky audience member can either stay up there in a cage to dance alongside the band – many do – or sit in a more relaxed area at the back and drink cocktails.

It has more in common with old-fashioned vaudeville than a standard rock ‘n’ roll concert, while the wheel serves up interesting combinations of songs, eschewing the normal pacing of a planned set list.

“We have to be well-rehearsed, we have to have 50 songs in the pocket to even play the game,” says Costello. “We’ve delved into the back catalogue a bit so I think we have about 150 we can choose from.

“The wheel’s fair, too, until we lean on it a bit when someone tells us it’s their wedding anniversary or something. Mostly we let it be true and the wheel decides. Some songs have come up twice or even three times in a night.”

Naturally, there are gasps when the wheel approaches any of Costello’s biggest hits – Oliver’s Army, Alison, Watching The Detectives, Everyday I Write The Book or Pump It Up. Often what would normally be a ‘finale’ song or form part of an encore will be chosen right at the top of a show.

“The wheel has made us play the older songs better, and we never know what to expect,” says Costello. “You have to drop into the darkest, most emotional songs without any preparation, and one of your favourites might not get chosen for five shows.”

He does, however, insist on playing Shipbuilding and Tramp The Dirt Down. The latter featured on 1989’s album Spike, and finds Costello hoping he lives long enough to see the death of Margaret Thatcher so he can find her grave and stamp on it.

Now that’s actually happened, he feels slightly differently. “I have difficulty with this one,” he says. “Two of my family had dementia-related demises, so I would never wish that on my worst enemies. I have difficulty wishing ill on people, despite having written that song. I can’t celebrate.

“I could if it meant the death of her ideas, but they’re alive and well. That’s the difference here. There are few people in history you would wish death on, but there would be something pathetic, and beneath us, in celebrating the death of anyone.”

He adds that it’s easy for songwriters to get very self-important about their work but, with time, he’s come to accept that whatever he writes will only affect certain people – normally the people who are listening anyway.

“There’s always this argument that these rich musicians don’t have the right to express what they feel. But yes, yes we do, we’re allowed to express ourselves.

“We’re not asking anything of anybody, and there are contradictions in songs that are about complicated issues. I wanted them to be there, because it wasn’t black and white. Nothing ever is.”

:: His father Ross McManus sang the theme to the famous ‘Secret Lemonade Drinker’ adverts for R White’s Lemonade in the 1970s, while a teenage Costello provided the backing vocals.

:: His father was also a trumpeter and bandleader and performed under the name Day Costello which, along with Elvis Presley, provided the inspiration for Costello’s stage name.

:: He has been married three times, and wed Grammy-winning Canadian singer and jazz pianist Diana Krall in 2003.

:: He is also a keen football fan and supports Liverpool, where he lived for most of the 1970s.