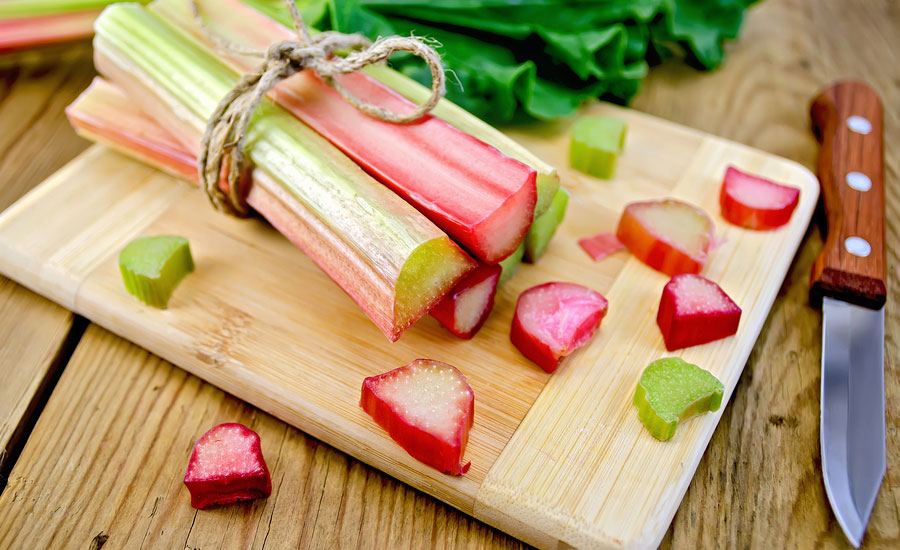 If you are fortunate enough to grow your own, it should be just about ripe and ready to use.  Rhubarb is one of those quirky fruits, that for some reason doesn’t appeal to all palates, especially younger ones. If you have run out of inspiration but not your crop, here are a few ideas on how to use rhubarb, as an alternative to a traditional crumble …

FOR THE MUFFIN MIX

Heat oven to 220C/200C fan/gas 7. Line a 12-hole muffin tin with paper muffin cases. Stir the sugar and rhubarb together and set aside while you make the crumble topping. Mix together the muscovado sugar with the flour, oats and cinnamon, then rub in the butter until clumpy with your fingertips.

Stir the oil and egg, vanilla and buttermilk into the sugary rhubarb (don’t worry if it’s a little bit juicy). Now, add the flour, baking powder and bicarbonate of soda and stir well.

Quickly spoon into the cases, then scatter each with a thick layer of the crumble mixture. Bake for 15-18 mins until golden and a cocktail stick poked into the centre of a muffin comes out clean. Cool on a wire rack.

Cut the rhubarb into bite-size pieces, then put them in a frying pan with half the sugar and warm through just until the sugar dissolves. Immediately tip the rhubarb into a bowl with the juices and leave to cool. Preheat the oven to 180C/gas 4/fan 160C.

Roll out the pastry quite thinly and use to line a deep, loose-based 24cm fluted flan tin. Line with greaseproof paper and baking beans and bake for about 20 minutes until the pastry is pale golden and no longer raw.

Beat together the egg and egg yolk, vanilla extract, remaining caster sugar and the flour. Gradually whisk in the cream with any juice from the rhubarb (you should have a tablespoonful or two). Now spoon the rhubarb into the prepared pastry case and pour the cream mixture over.

Turn the oven temperature up to 200C/gas 6/ fan 180C and bake for about 20 minutes, or until the custard is very lightly set and there is a thin skin on the top.

Mix together all the topping ingredients and spoon evenly over the pie. Return it to the oven for a further 15 minutes or until the crumble is golden and the custard set with just a little wobble. The top of the pie may have risen and cracked when you take it from the oven but don’t worry as it will settle back again on cooling. Serve warm.

Put a small plate in the freezer. Put the rhubarb into a preserving pan or your largest saucepan with the sugar and halved vanilla pods. Heat gently, stirring, until all the sugar has dissolved, then squeeze in the lemon juice and increase the heat.

Boil for about 10 mins, skimming off the scum as you go (the fruit should be soft). Test for setting point by spooning a little onto your chilled plate. After 1-2 mins, push your finger through the jam – if the surface wrinkles it is ready, if not, keep cooking for 2-min intervals, testing in between. (Or if you have a sugar thermometer it should reach 105C)

Once the jam is ready, let it cool for about 15 mins before ladling into warm sterilised jars and sealing. Will keep for 6 months in a cool, dark place.