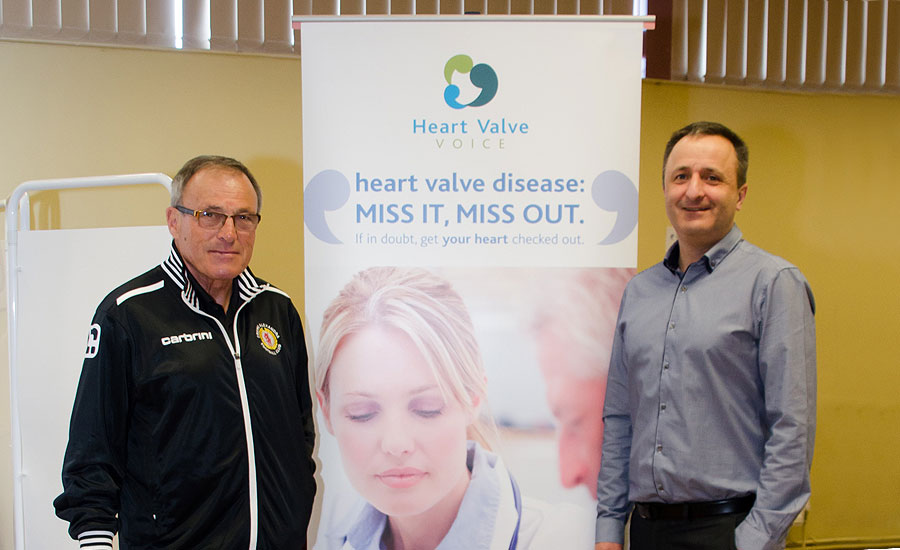 Dario Gradi is the Academy Manager and former Football Manager at Alexandra Crewe FC, and has been at the club since 1983, one of the longest-standing football managers in the UK.

Ten years ago, in his sixties, he became increasingly aware of his breathlessness when climbing to the top of the stadium to speak to the local radio and press after football matches, and often had to sit down before answering their questions. His father had died of tuberculosis when Dario was a child, and he was worried that he had it too, but he was wrong.

‘The doctor listened to my heart with a stethoscope and said straight away: “It’s your heart.” The beat sounded abnormal. I was sent to have an echocardiogram — an ultrasound scan of the heart — and they told me I had heart valve disease.’

Heart valve disease is caused by either wear, disease or damage of one or more of the heart’s valves, affecting the flow of blood through the heart. This can cause symptoms such as breathlessness, chest pain, dizziness and fainting. However, if diagnosed and treated early, patients are often able to return to normal life. It’s surprisingly common, affecting around one million people aged 65 and over in the UK.

After diagnosis, Dario was immediately referred to Consultant Cardiac Surgeon Professor Ben Bridgewater, who told him he would need to have his aortic valve replaced. However, it wasn’t causing him too many problems at that time, so instead Dario had an echocardiogram every year to check on the valve, and after five years of his symptoms gradually worsening, he sensed it was time for surgery. He was given the option of having either a metal or animal-tissue valve replacement, and because he has an active job, a tissue valve was more suitable, which would eliminate the need to take warfarin (a blood-thinning drug), but might increase the risk of needing a second valve replacement. He recovered well after his operation and was back at work within six weeks. A decade after his original surgery, Dario needed a second tissue valve replacement operation, which took longer to recover from but has still allowed him to remain active.


“Realising that you have heart valve disease is difficult as the symptoms – breathlessness, feeling tired and chest pains – can be mistaken for ageing. However, like me, it can be well treated if it is diagnosed early. When in doubt, get your heart checked out,” says Dario.

A diseased valve can either be repaired or replaced by a surgical procedure which has been proven to be very successful over many decades. More recently, a less invasive procedure called TAVI (Transcatheter aortic valve implantation) has become available for those who are considered to be at too high-risk for surgery.

To hear more about Dario’s story, watch his video on YouTube

5 ways to lower your blood pressure
JOIN SILVERSURFERS AND...