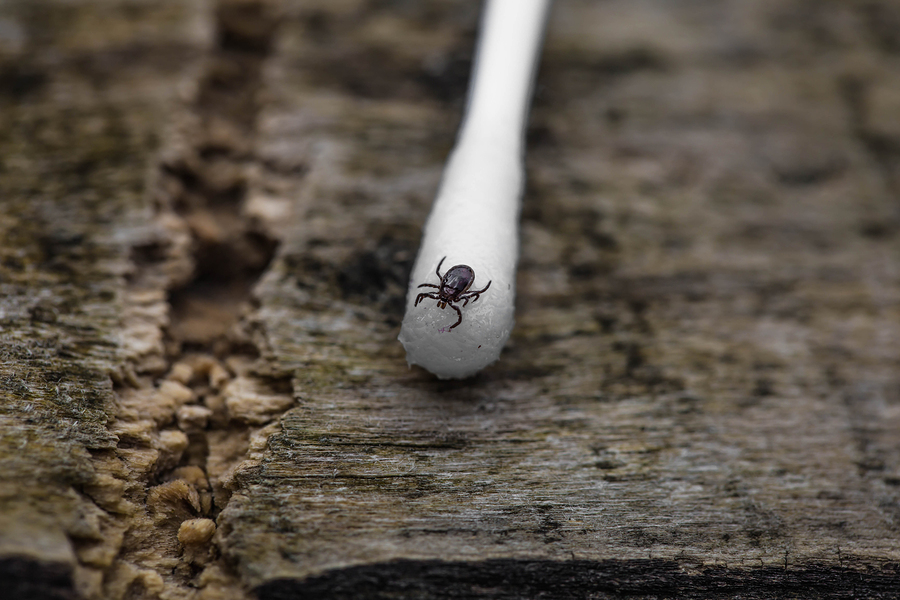 Lyme Disease is on the rise in the UK – known cases of the bacteria quadrupled between 2000 and 2011.

The NHS estimates there are now between 2,000 and 3,000 cases of Lyme disease a year in England and Wales, and the once little-known disease is beginning to get more attention.

What is Lyme disease?

Ticks are tiny spider-like creatures found in dense woodland and heath areas in the UK, Europe and North America. They can also be found in gardens or parks, though it’s more common in areas of deep vegetation where they have access to animals to feed on.

Ticks don’t fly or jump; instead, they typically transfer to humans by climbing on to skin or clothing.

Ticks infect humans by biting the skin and feeding on your blood, transferring bacteria in the process.

Generally, if a tick remains attached to your skin for more than 24 hours you’re more likely to become infected. However, because ticks are small and bites are not painful, people often don’t realise they have become attached to their skin.

Lyme Disease can be difficult to recognise because symptoms don’t always appear in the same way.

Many people with early-stage Lyme disease will develop a very distinctive, circular rash where they were bitten, sometime between three to 30 days afterwards. You’ll recognise it because it looks like a bull’s-eye on a dart board.

Other people experience flu like symptoms shortly after being infected: fatigue, muscle and joint pain, headaches, fever, chills and neck stiffness. If caught early, treatment can be simple and straightforward, and many people make a full recovery.

Because symptoms of Lyme disease can be similar to that of other conditions, it can be difficult to diagnose, but is most commonly identified with a blood test.

Right now there’s no vaccine that can prevent Lyme disease – the best way to prevent it is by remaining sensible and aware of the risks.

Keeping to footpaths, avoiding long grass, wearing appropriate footwear and choosing light coloured clothing when walking in woodland areas will help you minimise the risk of getting bitten by ticks.

At the end of the day, inspect your skin carefully, including your head and neck. Check any pets, too.

Being bitten doesn’t necessarily mean you’ll be infected – it’s thought only a small portion of ticks carry the bacteria.

Most tick bites occur during late spring, summer and autumn when people are most actively involved in outdoor activities like hiking and camping.

Be sure to stay aware when in areas around the UK that are known to have a high population of ticks, including:

If you’d like to find out more about Lyme disease, visit the NHS website or the charity Lyme Disease Action.

Have your or someone you know ever contracted Lyme disease? Share your experiences in the comments below.

Treehugger1
29th Jun 2017
0
Thanks for voting!
Can anyone advise on the best way to remove these little beasts please.
Traditionally we were advised to grasp and twist but recently I saw something on TV which stated categorically that you should Not twist, so i'm now confused,
ReplyFlag as inappropriate

queenbee
29th Jun 2017
0
Thanks for voting!
I contracted Lyme Disease approx. 14yrs ago and my doctor just didn't know what was wrong with me. I felt so ill and looked on the computer to find out what my rashes were and that's where I discovered Lyme Disease. I was eventually taken seriously some 3 months later and put on a long, strong dose of antibiotics. These didn't help and I struggled with joint pain, brain fog, loss of balance, memory problems, depression and heart problems for 10yrs. I am better now but still suffer weird pains and memory problems.
ReplyFlag as inappropriate

JudieR
29th Jun 2017
0
Thanks for voting!
We were Motor homing in Scotland when my mum found a tick attached to her arm. The NHS up on the North coast was wonderful, The tic was soon safely removed and anti antibiotics given as a precaution. All this several miles North of Gairloch on a Sunday in a Thunderstorm. One call to NHS arranged for a doctor to meet us about half a mile away in 30 minutes. I can't praise them enough.
ReplyFlag as inappropriate

SueM32
29th Jun 2017
0
Thanks for voting!
I contracted Lyme Disease 9 years ago..mis diagnosed for 4/5 as presented as sciatica which gradually got worse & worse over 4/5 month period leading to total loss of any use of the leg & the most horrendous pain I liken to worse than labour pains without pain relief!
I didn't have a rash or see a tick attached but had a long haired dog who was a mop for them despite spot ons.
I was off work 6 months & only went back because my employer allowed me to work in the office on shorter hours. I have a permanent disability albeit slight & can always feel where the damage was done!
ReplyFlag as inappropriate

Kes
29th Jun 2017
1
Thanks for voting!
Thanks for reminding us about this nasty disease and what to look out for.
ReplyFlag as inappropriate

Wilf
25th Jun 2017
0
Thanks for voting!
Our dogs have quite a few ticks as they roll in the local grass and go through heather which has them as deer carry them and apparently there has been an explosion of deer numbers in the UK in the last few years.
ReplyFlag as inappropriate

Thinking about straightening your teeth as an adult? Here’s what you need to know

As a diet rich in omega-3 is linked to reduced migraines, here’s how to get more into your diet
JOIN SILVERSURFERS AND...