This site uses cookiesClick here to remove this messageMore information
Welcome to Silversurfers - features, offers, news & social forums for the over 50s...
Silversurfers
Log In Join
Silversurfers
Menu
Articles
Articles TravelAdventure HolidaysLearning to ski at home and away 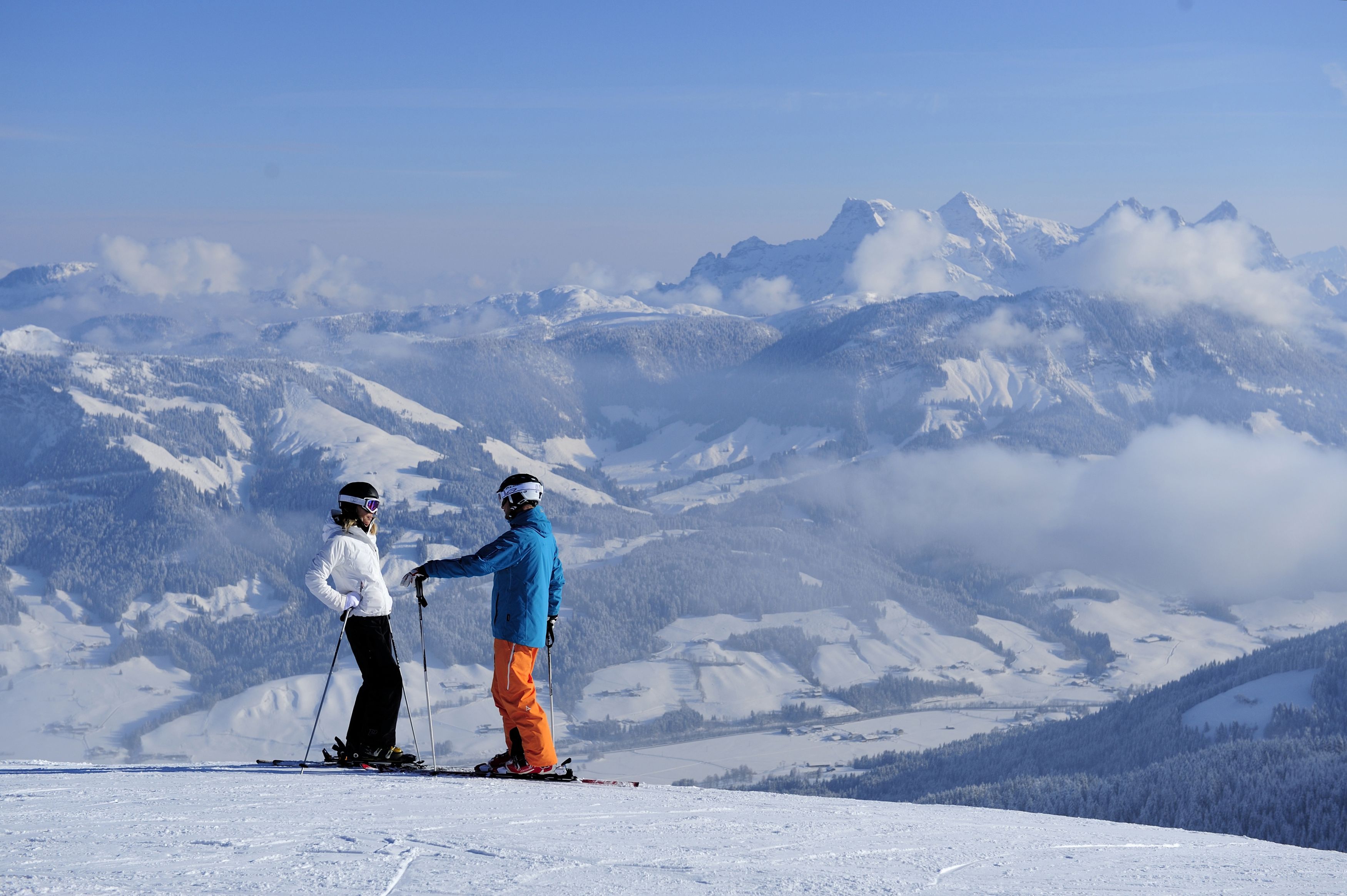 Learning to ski at home and away

With most of Sochi’s Team GB candidates having honed their skills on UK slopes, Ellen Branagh follows suit by joining the Go Ski Go Board scheme before heading to the Austrian Tirol

Standing at the top of an Austrian mountain, I can’t quite believe I’ve made it. But I’ve actually done the easy bit. It’s the next stage that’s going to be the challenge.

Get the skis lined up, bend the knees, and off we go!

Gliding down the slope, I’m talking to myself all the way, trying to remember when to shift my weight from one foot to the other to turn, which knee to bend more, which pole to hold lower, and all the other things I’ve been taught.

It might not be pretty, but I’m doing it, I’m actually skiing.

It’s now that I can finally understand why the skiers I know return year after year, waxing lyrical about pistes and powder and all things ski.

As I sail down the relatively quiet blue run in Austria’s St Johann in Tirol, I can feel the same addictive adrenaline. And I even start to feel a little bit graceful as I get used to rhythmic turns, the sounds of the skis zooming over the snow, and the peace and quiet as I focus only on me and my skiing.

Needless to say, I’ve come a long way from the rather fetching impression of ‘Bambi on Ice’ that I performed on my first day at the Xscape snowdome in Milton Keynes.

At the ripe old age of 31, my husband finally persuaded me that skiing would be a great holiday. The only problem was, I’d only done it once and hated every second of it.

So I decided to start again, and go right back to basics. I couldn’t think of anything worse than being at the top of a cold, snowy mountain, crying as I fell over, again and again and again, like a little lost lamb bleating for its mother.

Thank goodness then for Go Ski Go Board, a new scheme that helps you learn to ski in the UK, so by the time you go on your well-earned holiday you can enjoy the pistes from a normal view, rather than sliding down on your behind.

After all, there’s no point investing money on a ski holiday if you’re going to end up spending the first few days on your backside, or retreating shamefully to your chalet as a group of seven-year-olds make black runs look like child’s play.

Instead, you have three two-hour lessons before you go, meaning that you’re fully prepared to make the most of the slopes.

And the price includes everything, so you don’t have splash out on kit until you’re certain skiing is for you.

When I first arrived at the slope in Milton Keynes, it did look rather intimidating.

Putting skis on for the first time was all a bit alien – like a duckling trying to walk across an icy lake.

But with a manageable small group of five, our instructor soon had us inching sideways up the nursery slop and snowploughing our way down.

By the end of lesson one, we were pretty proud of our progress. The following week, the dread had gone and we were all itching to hone our skills.

It’s amazing what can be achieved in two hours, and by the end of week two we were gently meandering down the slope in wide, lazy shapes.

We were given technique exercises to practise in between lessons, and by the end of week three we were throwing ourselves down the “real” slope, then rushing for the lift to have another go.

Of course, there were a few tumbles, crashes and near misses, but overall we left feeling pretty confident we were ready to face the real world.

Which brings me to Austria. 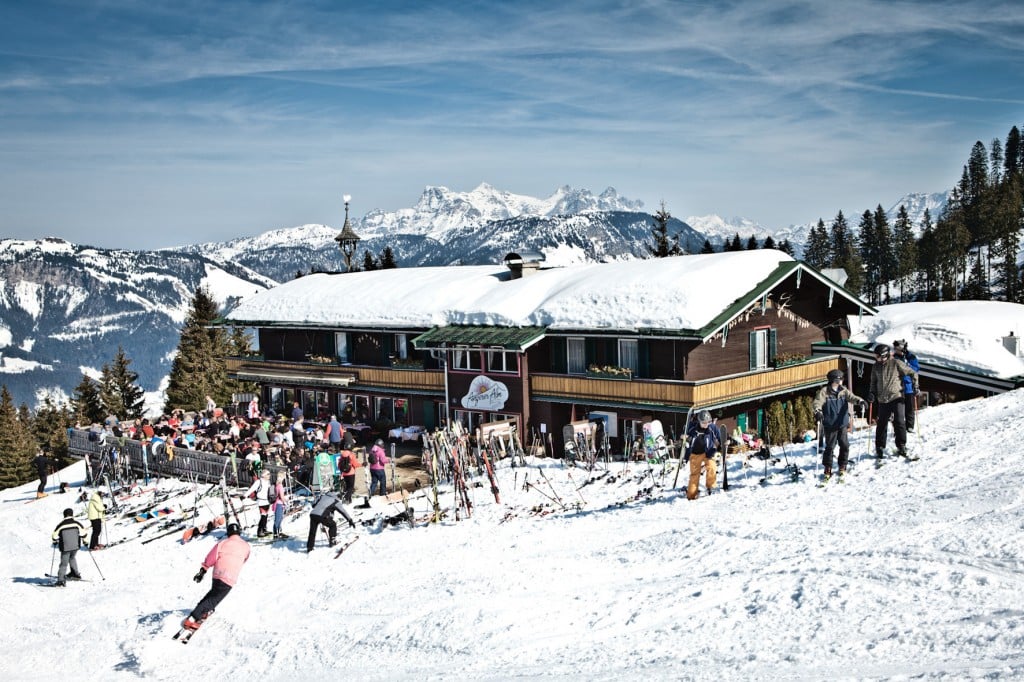 No husband this time; this is about me and my fellow beginners translating our snowdome lessons to the big wide world.

Ski instructor Harry’s motto is “learning by doing”. There’s no messing around on green slopes here. After picking up our kit (already knowing how to put boots and skis on is a great way of reducing the inevitable feelings of inadequacy when surrounded by seasoned skiers and boarders), we have a quick test run on the nursery slope and we’re straight on a chair lift up to the top of our first blue run.

St Johann in Tirol is part of the Kitzbuheler Alpen in the Tirol region. Perfect for beginners and families, it’s a great place for us to start, full of long, wide blue runs where you can hone your skills without causing too much damage.

As we perch on the top for the first time, it’s a quick yell from Harry and we’re off. Of course, this is pretty different to an indoor slope, but before long we’re making our way down with whoops and smiles all the way.

Being new to skiing, I was also new to the legend that is apres ski. I have to admit I was sceptical. I mean, it’s just like doing to the pub or a restaurant, just up a mountain.

But after the first night I’m converted. There really is nothing quite like enjoying a warm gluhwein (mulled wine) halfway up a mountain, surveying the winter wonderland around you.

It’s pretty magical and well worth the journey.

St Johann is great for both mid-slope and bottom-of-the-slope sessions, from the Grander Schupf Restaurant, where you can tuck into traditional Austrian dishes of Wiener Schnitzel or Tiroler Grostl – a carb-heavy mix of potatoes and bacon, or the Angerer Alm, which boasts one of the best-stocked wine cellars in the Alps.

Being a more family-friendly resort, St Johann doesn’t fit the debauched stereotype of some ski destinations. By mid-evening the bars at the bottom of the slopes have started winding down, so everyone can get home for dinner and a good night’s sleep ahead of another day’s skiing.

From the minute I first left the snowdome in Milton Keynes I knew I’d fallen in love with skiing, but hitting the slopes for real is all the confirmation I need.

Now I know what all the fuss is about, I too will be returning year after year, waxing lyrical about the “powder” and perfect runs. I’m living proof that skiing can be child’s play for adults too.

:: Ellen Branagh was a guest of Crystal Ski (www.crystalski.co.uk; 0871 231 2256) who offer a week’s half board at the 4 star Hotel Brückenwirt in St Johann from £515, including flights from Gatwick (as well as all major UK airports) to Innsbruck or Salzburg and transfers. A ‘first-time’ ski or board package includes six-day lift pass and equipment hire as well as five days tuition (four hours daily) and costs from £254.

:: The Go Ski Go Board (www.goskigoboard.org.uk) programme includes six hours of instruction and is on offer at over 30 indoor centres or outdoor slopes across the UK. Prices at Snozone, Milton Keynes start from £135 for six hours.