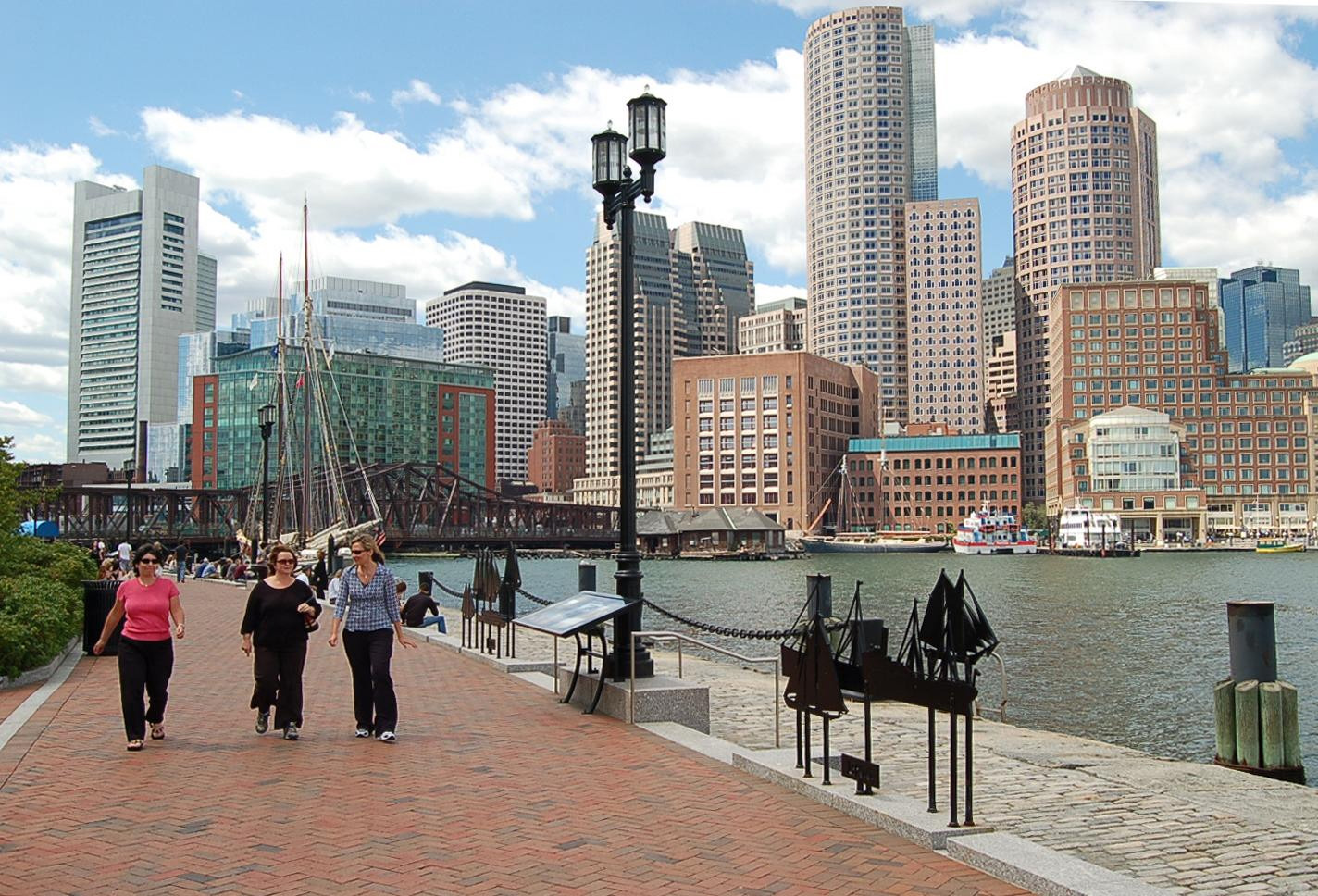 Shop on in Boston

With its culture and history, Boston has always lured visitors from across the pond.

Jet lag can have it perks, and standing on the banks of the Charles River, watching the sunrise over the Boston cityscape as wintry night gave way to crisp early morning made the trans-Atlantic insomnia a little easier to bear.

A band of hardy joggers and dog walkers were already well into their daily exercise routine around the non-tidal waterway that snakes its way between the north side of the port city and Cambridge, the college town home of Harvard and MIT.

But while the fitness fraternity had eyes firmly on the tree-lined paths provided for their exertions, my unscheduled dawn stroll across the Longfellow Bridge turned out to be the perfect way to soak up one of America’s most historic cities, before venturing into its beating heart.

Tax was the key issue for Bostonians as the bitter dispute between Britain and her American colonies escalated into revolution in 1775, with the War of Independence. More than two centuries on, the city is again raising another matter of taxation with her cousins across the pond, albeit a rather less inflammatory one.

Boston is urging British and Irish shoppers to eschew New York’s Fifth Avenue this winter and head to Massachusetts instead.

And the reason – you won’t be subject to the same rates of sales tax applied in shops in many other US states.

The proprietors of the designer outlets in the chic Newbury Street hope this financial incentive is enough to attract bargain hunters, and that perk – along with the promise of a city rich in culture – persuaded me to choose Boston for a winter break.

Dubbed the walking city, it is smaller than many of the US’s major metropolises.

Compact and with fewer of New York and Chicago’s towering sky scrapers, a leisurely walk back from the Charles River into the grand Victorian streets of the Back Bay through into the city centre and on to the harbour on the other side takes less than an hour.

Newbury Street cuts through the Back Bay and its brownstone facades makes it an experience whether you buy anything or not. My hotel was on the nearby Boylston Street – The Mandarin Oriental.

Counting Tom Cruise among its recent clientele, this five-star haven was voted the third best hotel in the US in a recent poll.

While it provided a luxurious central location to stay, its restaurant and bar are also well placed for shoppers looking for refreshment after a day in the Newbury boutiques or the close-by Prudential Centre.

The Mandarin’s spa has a reputation as one of the finest in the state and, with the jetlag still raging, that was where I spent a long afternoon.

Linking the Back Bay and downtown is the picturesque Boston Common. It was a great place to start my second day. Navigating around the fearless geese that roam the 380-year-old park, it felt a bit like Central Park in miniature.

Just off the Common’s north edge is the exclusive Beacon Hill, a beautiful neo-Georgian neighbourhood still illuminated by gas lamps. A wander up its steep streets was hard on the calf muscles, but well worth it, just for the glimpse into the world of Boston’s patrician elite.

If old money is resident in Beacon Hill, the new money is being made across the Charles in Cambridge – home of some of the best minds in world.

Boston boasts a remarkable 57 different colleges and universities and some of the most prestigious now sit in Cambridge. Like England’s Cambridge and Oxford, Harvard and MIT (Massachusetts Institute of Technology) have become tourist attractions as well as revered seats of learning.

The newly constructed Entrepreneurial Walk of Fame at MIT’s Kendall Square is ample proof of that. Bill Gates, Steve Jobs and Thomas Edison are among those immortalised on this boulevard of notable Americans.

A trip to Cambridge is not complete without a visit to Tory Row at Harvard, a street of colonial 18th century wooden mansions, where many British loyalists lived during the revolutionary war.

The 250,000 students resident in Boston and Cambridge during term time explains how the area can sustain four professional sports teams – one of the few American cities that does.

The Boston Celtics basketball team and Boston Bruins ice hockey franchise play at the TD Garden in the North End while across town the baseball players from the storied Boston Red Sox entertain at the game’s oldest professional arena in the US, Fenway Park.

I took a 40-minute train ride south to Foxborough to sample an American football game at the home of the New England Patriots. And while baseball is a summer sport, a tour of the quaint 100-year-old Fenway Park was hard to resist. Its opening in April 1912 didn’t make many headlines – it was the same week the Titanic sank. That is one anecdote among countless provided by the highly entertaining New York Yankee-hating guides.

As arguably the crucible of the American revolution, modern Boston makes much of its past. The Freedom Trail – an easy to navigate walking route around all the main sites of significance related to the War of Independence – can be completed in an afternoon and I found it a great way of taking in Boston’s sights and sounds at the same time as learning about its past.

A new museum to commemorate the Boston Tea Party – when a band of colonists infuriated at another British tax stormed ships in the harbour in 1773 and dumped their cargos of tea into the water – opened at the site of the famous ambush earlier this year.

In more recent times, the history of Boston is of course synonymous with that of the Kennedy family. A trip to the city would not be complete without a visit to John F Kennedy’s Presidential Library and Museum at Dorchester Bay and I was determined to see it before flying home. The I.M. Pei designed building on the waterfront houses a vast collection of artefacts from JFK’s life before and during the White House years.

Interestingly, the museum is also home to the papers of Ernest Hemingway. His family donated the valuable collection in recognition of JFK’s support in an audacious bid to recover it from the late author’s home in Cuba using a shrimp boat.

It is another intriguing story from a city brimful of them, and further proof that a short break in Boston has far more to offer than just tax breaks.

:: BEST FOR: Sales tax-free clothes shopping (on items under $175) and a fascinating step back into America’s revolutionary era.

:: TIME TO GO: Many good deals are on offer for a winter/spring break. In the height of summer the temperatures and humidity are not as oppressive as other east coast cities.

:: DON`T MISS: The John F. Kennedy Presidential Library and Museum and the bar near Boston Common made famous by the TV show Cheers.

:: NEED TO KNOW: Boston can get cold in the depth of winter. Pack for an arctic expedition just in case.

:: DON`T FORGET: To sample some of Boston’s famous clam chowder.

British Airways offer three nights at the 5-star Mandarin Oriental in Boston from £859 per person, based on two people sharing, for travel between December and March. Includes return British Airways flights in economy from London Heathrow and room only accommodation.

For further information on the Mandarin Oriental please visit www.mandarinoriental.com/boston