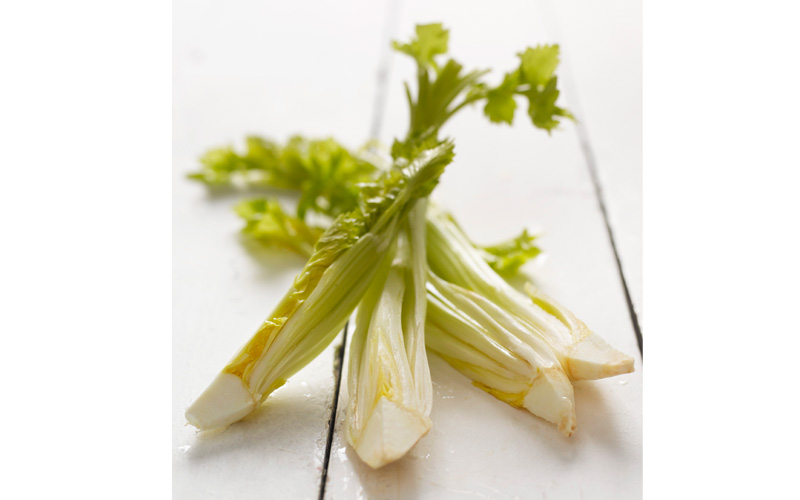 Immersing most of the celery in the rich Fenland soil as it grows gives Fenland celery a unique ‘nutty-sweet’ flavour and a less stringy texture, whilst still delivering a crisp crunch. The growing method also blanches the celery giving the sticks a paler colour which is why Fenland celery has become known as ‘white’ celery.

Winter white Fenland celery is not only a healthy snack but also a great cooking ingredient – the stalks can be boiled, steamed, braised, baked or cooked in the microwave to make a deliciously refreshing side dish and are also a great base flavour for casseroles, while the leaves are ideal for seasoning soups and stews. However, our collection of winter warmer recipes is designed to show that this heritage variety can also be the ‘star of the show’.  Try the following:

First, remove a few of the outer stalks from a head of celery and reserve for stocks or soups. Trim the base into a point (like a pencil), being careful to keep as much of the white root as possible – as that is the best bit. Wash carefully, then quarter the Fenland celery lengthways, making sure each quarter has its own section of root, and then stand in a celery vase or tall jug of cold water and serve at the end of the meal with a selection of Stilton (or other cheeses), salt, nuts, biscuits and bread. And don’t forget the port!

In Victorian times, celery specially grown in the Fens for the Christmas market (available from mid-November to New Year’s Day, depending on the weather) was extremely popular.

It started out as an artisan product specially grown for the London markets. The celery travelled straight from the fields to Shippea Hill station near Ely where it was sent to London by rail. Once there, the cold, dry and frostproof conditions of the railway arches in the markets were considered to be the perfect storing environment. It was as late as the 50s and 60s when the lorry became the vehicle for taking the celery to market.

It was grown in very wide rows split by deep trenches – this allowed for the black Fen soil to be banked up around the celery to protect it from frost and ‘blanch’ it, which is how it has also come to be known as white celery.

This traditional method, which is very labour- and land-intensive, gives the celery a unique ‘nutty-sweet’ taste.

It has been revived in recent years by G’s, who have been growing celery in the Isle of Ely in Cambridgeshire for 50 years, and is available from October through to mid December (weather permitting).

Fenland celery is harvested by hand using a specially shaped knife – it is a complex operation as the banked earth first has to be loosened by a special machine, and then the celery is carefully cut to retain plenty of the root.

The main variety of Fenland Celery grown by this method is Dwarf White, which was developed in the Fens over 100 years ago.  The shorter stems give you more leaf, which can be used for extra flavour in stocks, soups and stews.

Immersing most of the celery in the rich Fenland soil as it grows gives it a unique ‘nutty-sweet’ flavour and a less stringy texture, whilst still delivering celery’s famous crisp crunch.

The growing method also allows more of the root to be kept; an exceptionally flavoursome section of the plant that can often go to waste.