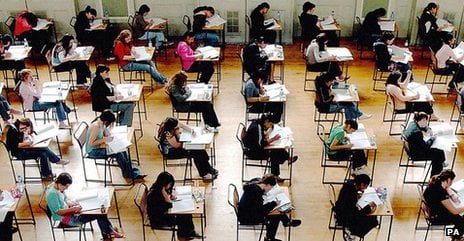 Looking at the title you may well ask yourself  “what is the answer?”.   Well it’s a good question.  Apparently the government have the answer, even though successive governments keep changing the education system.

I suspect that most Silversurfers members reading this will probably have done the 11+ examination at point in their education time.   I always felt this was a bit unfair and unrealistic, making children so young take an exam, which I suspect few understood the ramifications of, the results of which would affect you and your education and subsequent career for the rest of your life. Many of you will also have taken CSE’s or O’Levels in the 60’s and 70s which I believe really only tested how good your memory was and how good you were at exam technique.

At my Comprehensive school in Surrey in the early 1970’s, we were taught the subjects for two years, and then had to take the examinations which lasted about an hour each. Friends of mine who went to a nearby Grammar school, were not only taught the subjects but had hours revising previous papers so they understood the possible questions and exam techniques. Understandably their pass rates in Grammar school were a lot higher than in our Comprehensive.

The new system of GCSE’s was introduced in the late 1980s whereby pupils were continually assessed over the 2 years and then at 16 had a final exam. Both the assessments and the exam results went towards the GCSE mark and seemed a lot fairer and a true test of a students overall ability, rather than O’Levels. Our three children and all their friends benefited from this and I think most children did. It meant that pupils had to keep on top of work and continually learn it. The problem seems to have been every year the marks got continually better in the UK and certain people voiced concern that the GCSE’s were too easy. Maybe the education was just better and kids were smarter; that was my view!

It is also my view that studying for two years and only having a 2 hours exam at the end of it is just not an effective way of evaluating a students knowledge. What if you have hayfever, dont feel well or are having an “off day”. Now the government in its wisdom has said its scrapping GCSE’s in England and it will be replaced in core subjects like English, Maths and Science by a new qualification called the English Baccalaureate Certificate, (EBacc) which will be introduced from 2015. So our grandchildren will probably be taking this, and it will be different from the GCSE’s and very similar to O’Levels in that it will mean a single end of course exam and only one exam board for core subjects.  Mr Gove, the Education Secretary said the GCSE’s were designed “for a different age and a different world”. He added the changes would modernise the system “so we can have truly rigorous exams, competitive with the best in the world, and making opportunity more equal for every child”. To confuse matters Leighton Andrews who is the Education Minister in Wales said the new EBaccs were a “backwards step” and added that Wales may keep the current GCSEs.

It seems like our grandchildren will be going back to O’Levels again.  Confused? What is your view?